The new U.S. Ambassador to Japan Rahm Emanuel and Japanese Foreign Minister Yoshimasa Hayashi on Tuesday affirmed the two nations' alliance in coping with the challenges posed by China's growing clout and assertiveness in the Indo-Pacific region.

"The United States is fully committed to working with Japan as a full ally to counter the challenges and to realizing our shared vision for a truly free and open Indo-Pacific," Emanuel told Hayashi in his first official face-to-face meeting with a minister of Prime Minister Fumio Kishida's Cabinet. 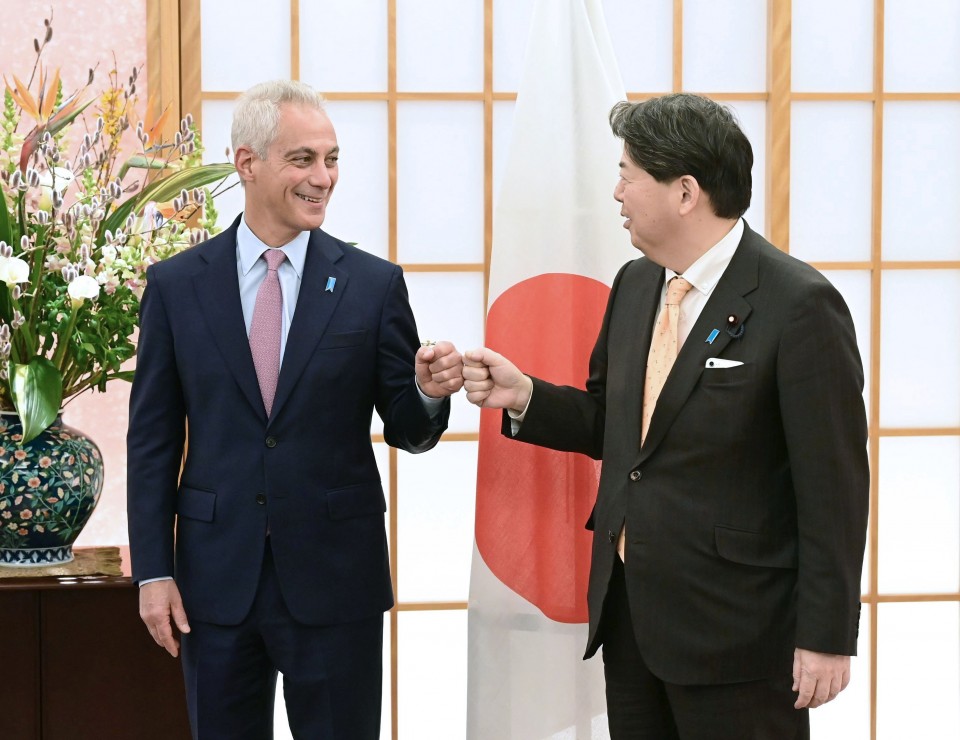 U.S. Ambassador to Japan Rahm Emanuel (L) and Japanese Foreign Minister Yoshimasa Hayashi are pictured ahead of their talks in Tokyo on Feb. 1, 2022. (Pool photo)(Kyodo)

"In order to further strengthen the alliance, let us forge our relationship in which we can have candid discussions," Hayashi said.

Emanuel, who came to Japan late last month, said the system Washington and Tokyo have built together "based on values and ideals" is "under unprecedented pressure today," specifically citing China's "coercion, intimidation and disinformation," as well as Russia's recent massive military buildup on the Ukrainian border and North Korea's repeated missile firings.

"Together the U.S. and Japan will aspire, will act, and we will accomplish many things as allies," said the 62-year-old new envoy known for his close ties with President Joe Biden.

Earlier that day, Emanuel also met Japan's Vice Foreign Minister Takeo Mori and presented him with a copy of his credentials as ambassador.

Also known as a former top aide to former President Barack Obama, Emanuel filled the key post that has been vacant for more than two years since William Hagerty stepped down in July 2019 to run for the Senate.