Prime Minister Fumio Kishida on Friday unveiled a set of tighter Japanese sanctions against Russia featuring a freeze on assets held by Russian banks and curbs on exports to military-linked groups in response to Moscow's invasion of Ukraine.

The new sanctions package also includes export controls on semiconductors and other high-tech products, as well as a suspension of visa issuance for certain Russian individuals and entities, Kishida said at a news conference. 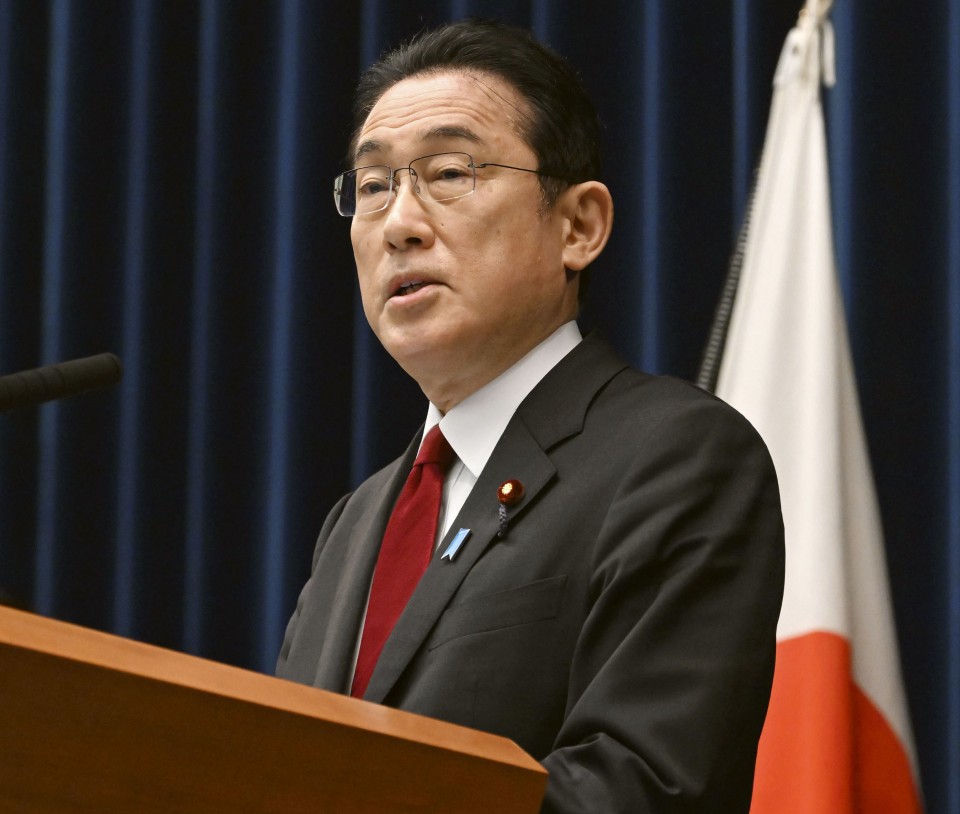 Japanese Prime Minister Fumio Kishida announces additional sanctions against Russia at a press conference at his office in Tokyo on Feb. 25, 2022. (Pool photo)(Kyodo)

The announcement came hours after Kishida and his counterparts from the Group of Seven industrialized nations condemned Russia and pledged to take "severe and coordinated" economic and financial sanctions against its "completely unjustified" attack.

However, Sberbank, Russia's largest financial institution that is on the U.S. blacklist, is not subject to Japanese sanctions.

The new sanctions do not cover the energy sector, either, but Kishida said, "Depending on how the situation unfolds, we will consider what we should do in coordination with other G-7 members."

Kishida declined to comment how the punitive measures may affect bilateral negotiations over four islands controlled by Moscow but claimed by Tokyo.

Condemning the Russian military attack as being in violation of international law, the prime minister said, "Japan needs to show its resolve not to allow any change to the status quo by force."

"The attack is totally unacceptable from the standpoint of our national security," he said. "It is an extremely serious situation with ramifications for the international order, not just in Europe but Asia and beyond."

Kuleba expressed gratitude for Japan's cooperation with Ukraine, according to the Japanese Foreign Ministry.

On Wednesday, Tokyo announced the first sanction against Russia, banning the issuance and trading of new Russian sovereign bonds in Japan.

Weeks of diplomatic efforts by major powers and their threat of punitive measures failed to prevent Russia launching a large-scale attack on Ukraine on Thursday.

Russian President Vladimir Putin authorized a "special military operation" in the Donbas area, which includes the two separatist regions of Donetsk and Luhansk formally recognized as independent republics by Moscow earlier this week.

It has also challenged the post-Cold War architecture, with Russia increasingly wary of the expansion eastward of the North Atlantic Treaty Organization to include Ukraine.

A decades-old territorial dispute with Russia has been seen as a headache for Japan in determining how far it should go with sanctions. No post-World War II peace treaty has been signed with Moscow due to the deadlock over the territorial issue.

Speaking at a press conference Friday, Russian Ambassador to Japan Mikhail Galuzin said he is "confident" that Japan's sanctions will "not contribute to building up a positive atmosphere along our dialogue on a very, very broad agenda we have together, including the peace treaty issue."

Japan has been urging its nationals still in Ukraine to leave, arranging charter flights for those wishing to do so.

Neighboring Poland will assist Japan with the evacuation effort, according to Kishida.

With surging fuel costs threatening to hurt consumer sentiment, Kishida vowed to work closely with oil-producing nations and relevant international organizations to help stabilize the global energy market and minimize the impact on the Japanese economy.