The 10 sets of siblings representing Japan at the Beijing Olympics will use their family links to bring out the best in each other, with some tapping into long-standing rivalries while others work together for a common goal.

At the Tokyo Games, there were 11 sets of Japanese siblings, but also a much larger team of 583 total athletes. This time the percentage is higher, with one-sixth of the team made up of siblings.

Of the 124 athletes on Japan's Winter Games team, 20 are competing with or against their brother or sister and all are facing the unique challenge of having both national and family pride on the line. 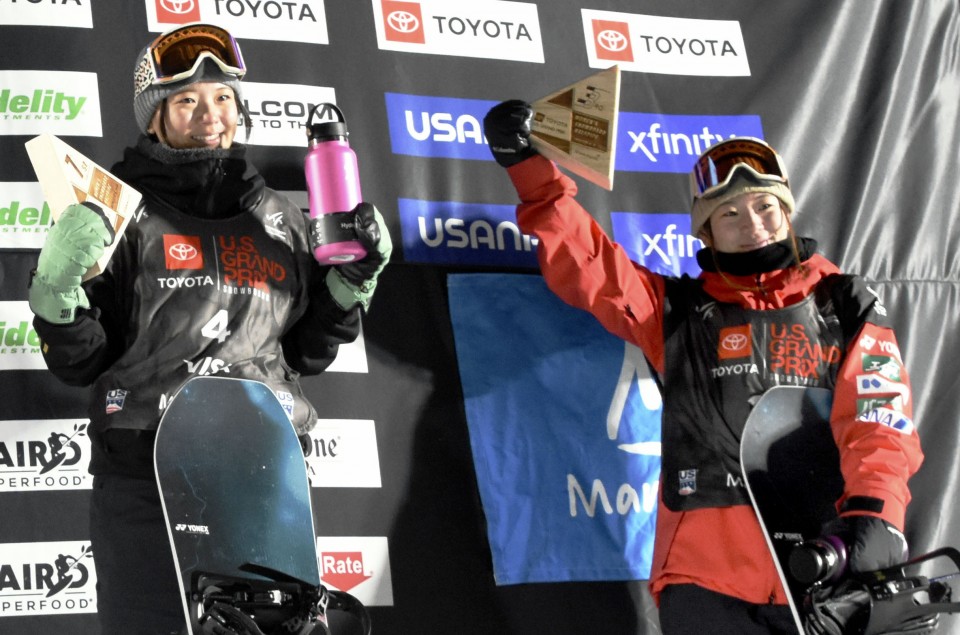 "I'm really happy to compete in the Olympics with my sister," halfpipe snowboarder and medal hope Ruki Tomita said in an online press conference held ahead of the games. "But we're rivals competing on the same stage and she's just another competitor I want to beat."

With Ruki and Sena Tomita both eyeing a medal in the halfpipe, the Niigata Prefecture-born sisters could find themselves standing in the way of each other's Olympic dream.

"We've been talking about making the Olympics together so I'm really happy that came true, but we both hate to lose," said Sena.

"I don't want to lose to my sister. I want to put everything I learned in training out there and leave with no regrets."

There is perhaps less at stake between snowboarding brothers Ayumu and Kaishu Hirano, with the former long-established on the scene as a two-time reigning halfpipe silver medalist and the latter four years younger and making his Olympic debut. 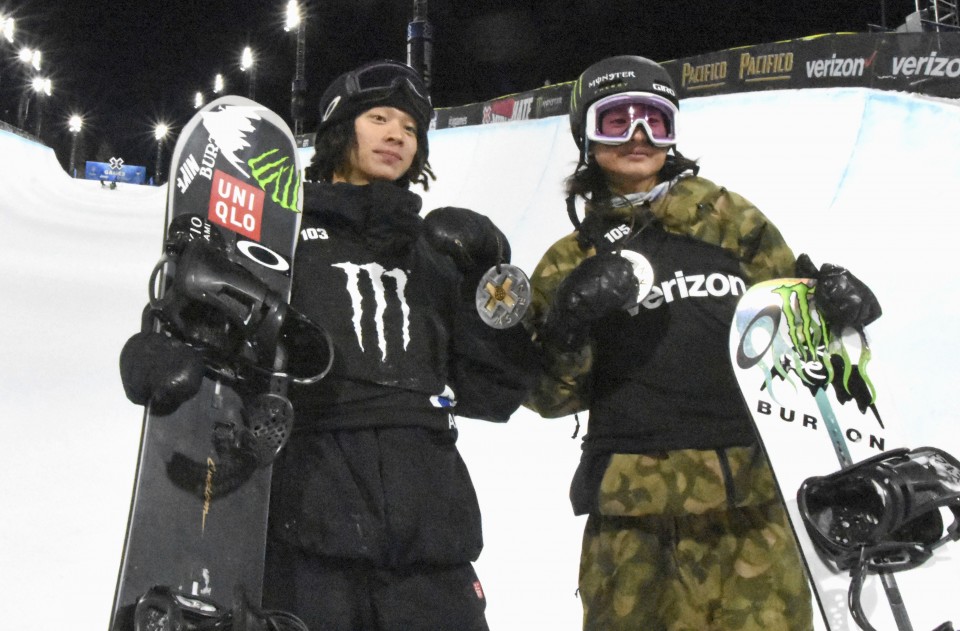 Ayumu Hirano (L) and his younger brother Kaishu Hirano pose for a photo after coming second and third, respectively, in the X Games men's snowboard halfpipe on Jan. 21, 2022, in Aspen, Colorado. (Kyodo) ==Kyodo

So the siblings are looking to use the time together in China as a way to create lasting memories.

"I've been waiting for Kaishu to move up for a long time. It's a valuable experience to compete at the Olympics as brothers," said Ayumu.

"Our family has been talking about how great it would be if both of us are able to go to the games," said Kaishu. "I want to put on a satisfying performance and hopefully win a medal."

Speed skating sisters Miho and Nana Takagi are by a long way the most successful sibling duo representing Japan at the 2022 Games. They, along with Ayano Sato and Ayaka Kikuchi, won team pursuit gold four years ago and with Sato have since set a world record in the event. 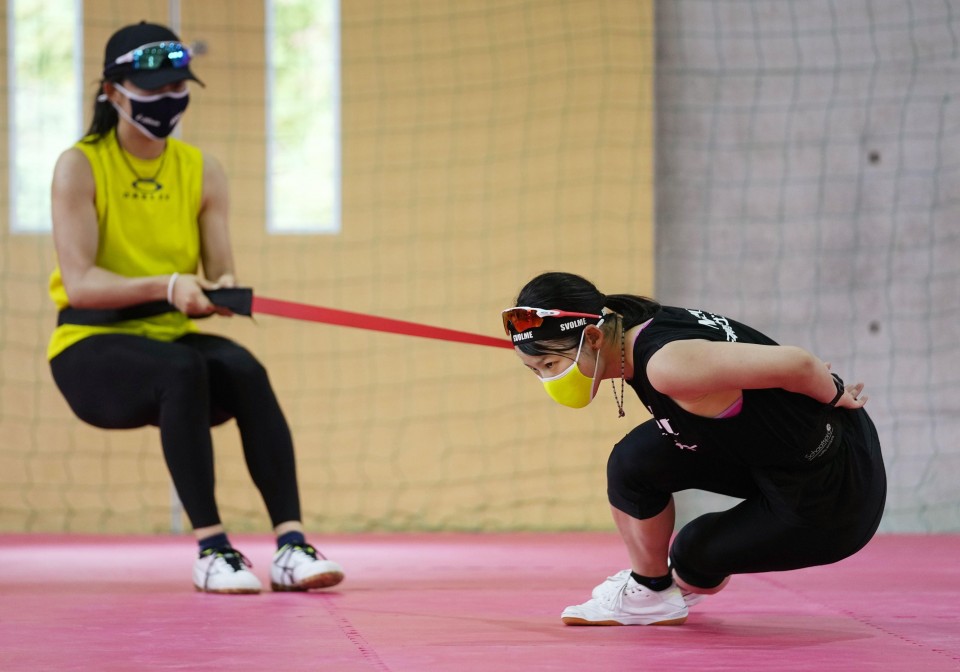 They already have five Olympic medals between them but are back to defend their team pursuit title in China while also contending in multiple other events. Japan team captain Miho is set to enter five events and tipped to take gold in her pet 1,500-meter race.

Nordic combined athlete Akito Watabe and ski jumper Ryoyu Kobayashi both have medals on their mind in the hills of Zhangjiakou, and both will also be competing alongside their brothers.

The Winter Olympic team sports of curling and ice hockey will also feature Japanese siblings who will put their familial connect to great use.

After capturing Japan's imagination with their mid-game snack routines in Pyeongchang, Chinami and Yurika Yoshida are back on the brooms. 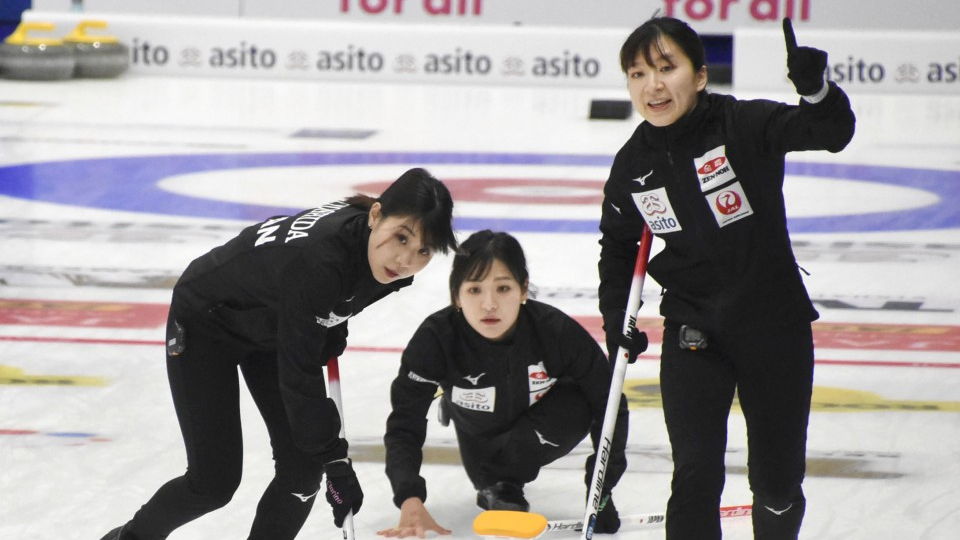 (From L) Yurika Yoshida, Chinami Yoshida and Yumi Suzuki of the Japanese women's curling team play in a match against Estonia on Dec. 15, 2021, in Leeuwarden, the Netherlands, at the final qualifying tournament for the 2022 Beijing Winter Olympics. (Kyodo) ==Kyodo

They won Japan's first curling medal with a bronze in 2018 and now want another for the collection.

The Japanese ice hockey team, known as Smile Japan, has three sets of siblings taking the ice together, the Toko, Yamashita and Shiga sisters.

"It gives me confidence to be able to play on the same team (as my sibling)," Haruka Toko said in the lead-up to the games.

Eight years ago, when Ayaka overcame a thyroid surgery to make the team for the Sochi Olympics but then-16-year-old Haruka did not, the two missed the chance to play together on the biggest stage.

This time, however, they are focused on making the most of being one of Japan ice hockey's three, one-two punch tandems. The team landed its first blow in its games opener, taking a 3-1 victory over Sweden on Thursday. 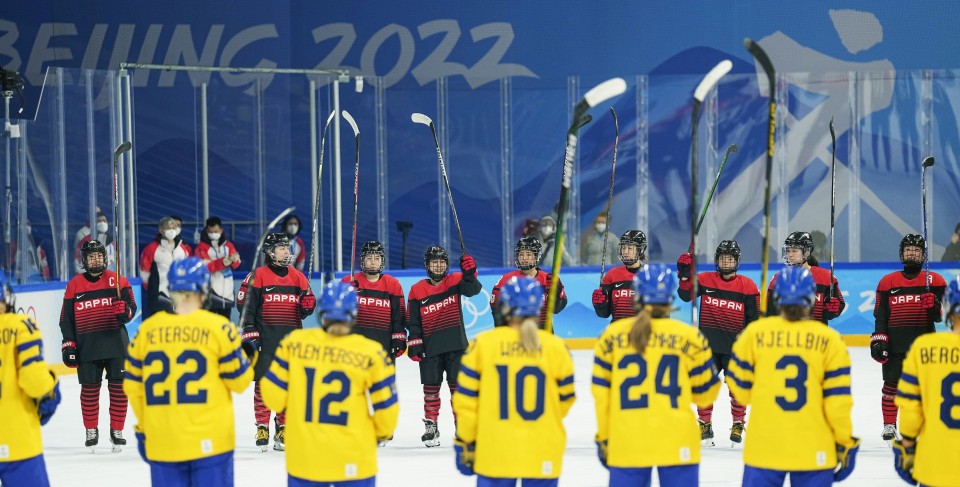 Japan women's ice hockey team members (background) line up after defeating Sweden 3-1 in a preliminary round group B match at the Wukesong Sports Centre at the Beijing Winter Olympics on Feb. 3, 2022. (Kyodo) ==Kyodo

"When one goes low, the other goes high," said Ayaka. "The one who is healthier supports the other."

Families of Olympic athletes are watching the games from afar again, due to the pandemic, with crowds largely absent. But sibling athletes can turn to each other for support when dealing with the struggles of isolated life in the COVID-19 bubble.

Olympics: Shoma Uno hits ice in pre-games practice but coach on his mind