Japan will join efforts by the United States and the European Union in blocking access by some Russian banks to the international payment system SWIFT, Prime Minister Fumio Kishida said Sunday, as Russia continued with its military attack on Ukraine.

On top of the sanctions already announced on Russia, Japan will freeze assets held by Russian President Vladimir Putin and other Russian government officials, Kishida said. 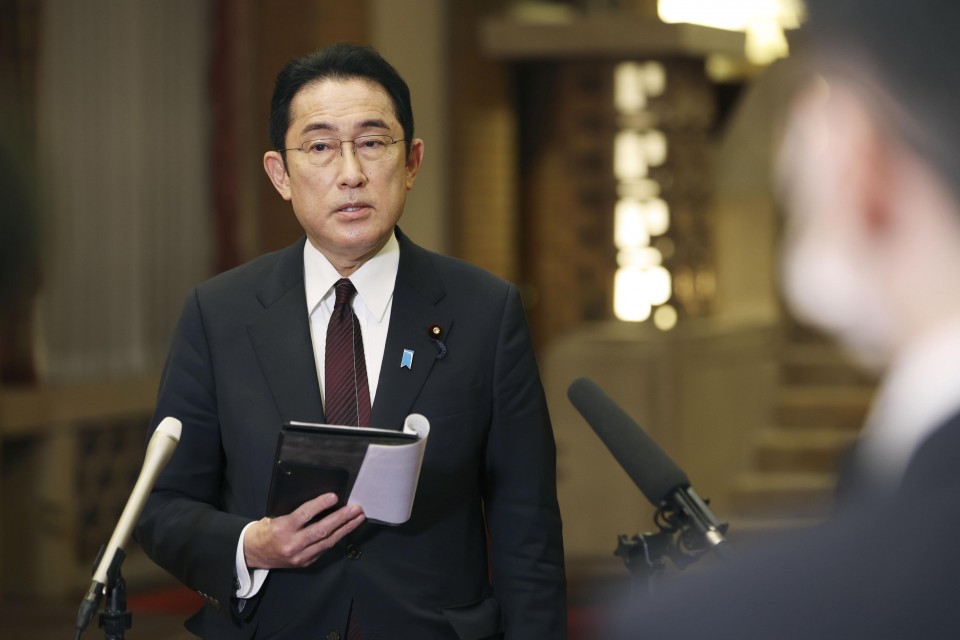 "We will show that a reckless act of violence comes with a huge price," Kishida told reporters, condemning Russia's "aggression."

"The international community's relationship with Russia can no longer be the same as before," he said.

The expanding list of sanctions against Russia indicates Japan is keeping pace with the West despite its desire to seek progress in resolving a territorial dispute long looming over Tokyo-Moscow relations.

Kishida condemned Russian's invasion of Ukraine as a violation of international law that undermines the sovereignty and territorial integrity of the Eastern European nation.

The Japanese government will extend emergency humanitarian assistance worth $100 million to Ukraine, he added.

On Saturday, Britain, Canada, the European Union, France, Germany, Italy and the United States said selected Russian banks will be removed from SWIFT, or the Society for Worldwide Interbank Financial Telecommunication.

The system connects more than 11,000 banks, financial institutions and companies in over 200 countries and territories.

Japan has already announced a raft of sanctions, including an asset freeze on three Russian banks, export controls on semiconductors and other high-tech goods, and a suspension of visa issuance for certain Russian individuals.

Russia's use of force to change the status quo has made it important for the Group of Seven nations to be united and resolute in taking action, Kishida said.

"Given the situation (in Ukraine), we cannot foresee our negotiations (with Russia) at this point," he said.

The spat over a group of islets off Hokkaido, called the Northern Territories in Japan and the Southern Kurils in Russia, has prevented the two nations from signing a postwar peace treaty. Japan maintains the former Soviet Union illegally seized the four islands while Russia claims they were obtained legally as a result of World War II.

On the prospect of imposing sanctions on Belarus, known for its close ties with Russia and seen as supporting Russia's invasion of Ukraine, Kishida said, "We will respond appropriately after examining the situation."

The United States has already decided to sanction Belarusian individuals and entities, calling for Belarus to end support for Russia's aggression.