Japan plans to extend the COVID-19 quasi-state of emergency for Tokyo and 12 prefectures by three weeks from its scheduled end this weekend to stem the spread of the highly transmissible Omicron variant, Prime Minister Fumio Kishida said Wednesday.

The extension beyond Sunday to March 6 will be finalized Thursday after the government consults with experts. In addition, Kochi in western Japan will become the 36th prefecture to be placed under a quasi-emergency from Saturday to March 6, Kishida told reporters.

Requests for an extension have been made by the capital and three of its neighboring prefectures -- Saitama, Chiba and Kanagawa -- as well as Gunma, Niigata, Gifu, Aichi, Mie, Kagawa, Nagasaki, Kumamoto and Miyazaki, for which the quasi-emergency state is set to end on Sunday. 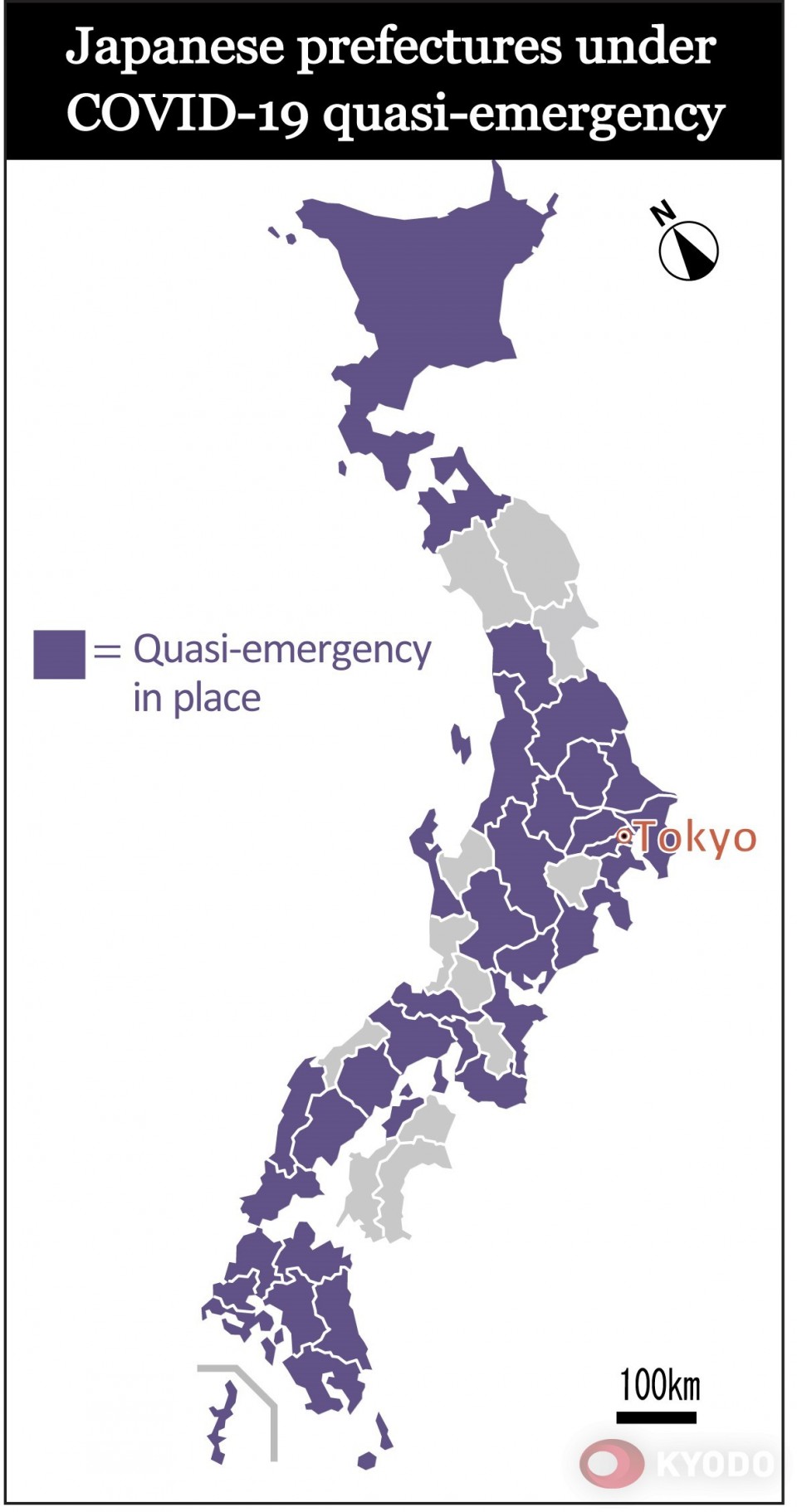 The quasi-emergency state involves restricting business hours of restaurants and bars, as well as a request to refrain from nonessential travel between prefectures.

"We are consulting (with the government panel) to extend the measure because the situation is far from safe" to lower the guard, Kishida told reporters at his office, warning of the possibility that economic activity will be hampered by surging cases.

Across the nation, Wednesday's daily count stood at 97,877, with 162 COVID-related deaths reported, a record-high for the second straight day.

Kishida said the pace of increase in new COVID-19 cases has been "clearly slowing," touting the effect of the stricter anti-virus steps that have covered over two-thirds of the country's 47 prefectures.

Health experts, however, have raised concern that the recent sixth wave of infections in Japan driven largely by Omicron has yet to peak and there will be more patients with severe symptoms.

Given that the virus surge continues and is pressuring the country's medical system, a government source said many of the remaining 21 prefectures are expected to similarly seek an extension of the measure beyond the Feb. 20 end.

Kishida said the government will decide whether to extend the measure for those 21 areas, including Osaka, by around next Wednesday by looking at the infection situation and other factors.

As Tokyo reported 18,287 new coronavirus cases on Wednesday, Kishida announced a plan to set up temporary medical facilities in Tokyo and Osaka to increase hospital capacity by a combined 1,000 beds and help them secure enough medical personnel.

Tokyo Gov. Yuriko Koike said after meeting with Kishida that the capital will add 660 hospital beds using a hotel and a vacant former medical facility, and also set up facilities for supporting pregnant women.

Weekly cases of ambulances struggling to find a hospital to accept patients have hit record highs for the fourth week in a row, with 36 percent of the cases believed to be coronavirus-related.

Tokyo, others ask to extend COVID quasi-emergency as Omicron rages