The United States said Monday it has agreed with Japan to grant certain relief from steel tariffs imposed during the previous administration under Donald Trump, a move welcomed by Tokyo as "a step" to resolve the years-long trade irritant.

The agreement, which will take effect on April 1, comes as the U.S. administration of President Joe Biden is working to rebuild alliances undermined by Trump's unilateralist foreign and trade policy, and is seeking to collectively address what they view as unfair trade practices by countries such as China.

Under the deal, up to an annual 1.25 million metric tons of steel -- the average amount of Japanese steel imported into the United States in 2018 and 2019 -- will be allowed to enter the country without facing the 25 percent extra tariff.

The 10 percent additional aluminum tariff, which the Trump administration introduced along with the steel tariff in 2018, will remain in place.

As part of the agreement, Japan has committed to "concrete actions" to fight against the global overcapacity in steel production, driven largely by the world's largest steel producer China, according to Biden administration officials. Beijing has been criticized for heavily subsidizing its industry.

The latest deal will "help us rebuild relationships with our allies around the world as we work to fight against China's unfair trade practices and create a more competitive global economy for America's families, businesses and workers," U.S. Commerce Secretary Gina Raimondo said in a statement. 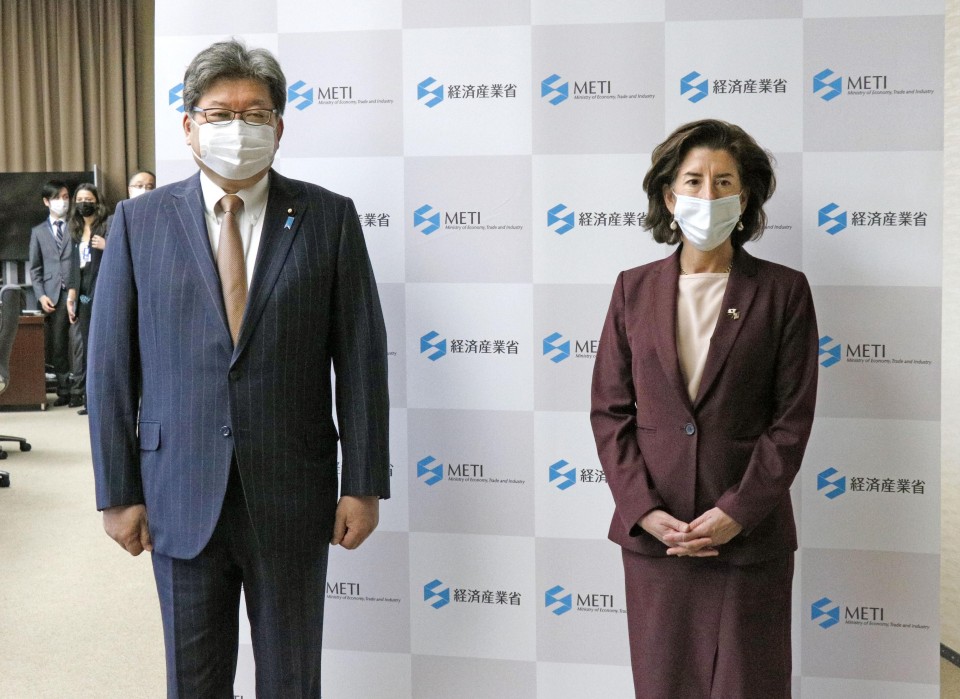 Japanese Economy, Trade and Industry Minister Koichi Hagiuda welcomed the progress but added his country will continue to seek a "full resolution" to the steel and aluminum tariffs issue.

Steel imports which will be eligible for duty-free treatment under the tariff-rate quota must be produced "entirely in Japan," according to Biden administration officials. The so-called "melted and poured" requirements are seen as a measure to prevent Chinese steel from ducking U.S. tariffs by being exported through Japan.

The Biden administration officials explained that the aluminum issue was not covered by the agreement at the request of Japan, indicating that Tokyo was not ready to make a commitment Washington wanted to receive duty-free access for the imports.

"Should Japan decide that it would like to make commitments on aluminum, including ensuring that any primary aluminum that they use does not come from nonmarket sources in order to receive duty-free access....we are open to discussing this issue with them in the future," one of the officials said.

However, Japanese Foreign Minister Yoshimasa Hayashi was at odds with the U.S. administration officials over the aluminum issue.

Hayashi suggested the two nations remain in disagreement over aluminum tariffs, telling reporters he feels it "regrettable" that Washington has taken no steps regarding removing such duties.

Hayashi cited a "big gap" between about 20,000 tons of Japan's aluminum exports and 280,000 tons of those of the European Union, both in 2020, although he added it is not appropriate to make a simple comparison.

Tokyo and Washington have been discussing the steel and aluminum tariffs issue after Hagiuda and Raimondo agreed on the launch of negotiations in November.

The steel and aluminum tariffs have been initiated under Section 232 of the Trade Expansion Act on the grounds that the imports in question could pose national security risks. They have affected key U.S. trade partners including the EU.

In October, the Biden administration reached an agreement with the EU to end the Trump-era tariff rift, with the U.S. side allowing a certain quantity of European steel and aluminum to enter duty-free and the EU suspending retaliatory tariffs on U.S. products.