Insurgencies, geographical conditions, and a lack of adequate knowledge among the locals have made coffee originated from Indonesia's easternmost, restive province of Papua less popular globally than those from the western part of the archipelago.

A relative newbie in the coffee world, Rini Sulistyawati Danudjaja is taking on the challenges of promoting Papuan coffee, including tirelessly educating Papuans on how precious the commodity is and how to do post-harvest work properly. 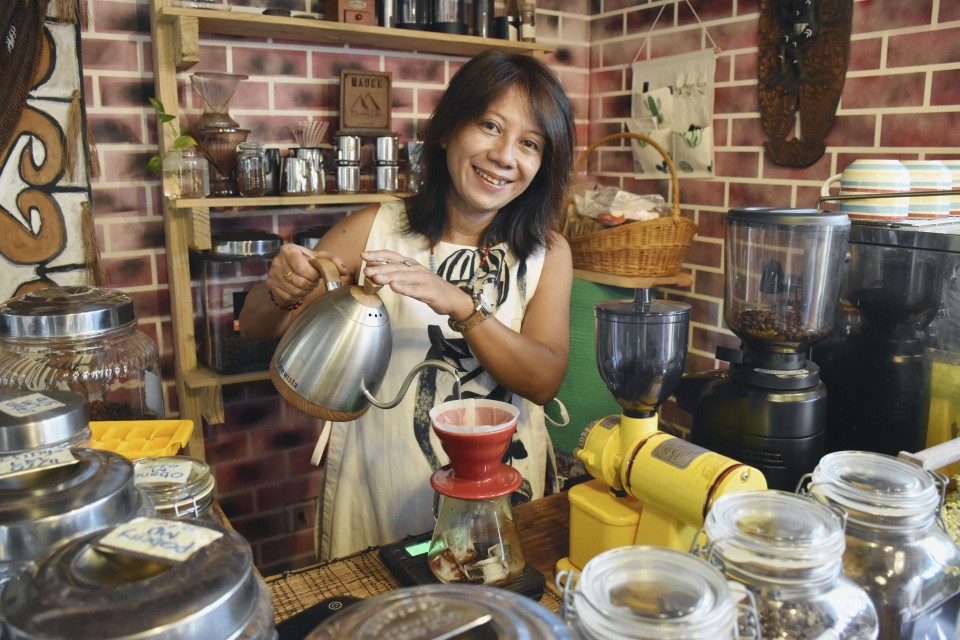 Rini Sulistyawati Danudjaja, owner of the Maoke coffee shop in Timika, Papua Province in eastern Indonesia, is pictured at the shop on Nov. 13, 2021. (Kyodo)

Leaving her comfortable life in the capital Jakarta, Rini decided to continue staying in the Papuan mining city of Timika in March 2020 after her work contract with the U.S. Agency for International Development in a Papuan biodiversity program ended.

Her seven-year stint with USAID had led her to get acquainted with Papuan-based Christian missionaries, well-established among the local population in far-flung villages from whom she could procure coffee beans.

The beans she received later opened her eyes to how varied Papuan coffee is, with each variant holding its unique characteristics.

However, she also learned that the commodity had been neglected for decades since Dutch colonialists ended their occupation in Papua in 1963, leaving their coffee plantations unharvested.

"In highland villages, a lot of coffee trees are let to grow up as high as 2 meters. The fruits just fall down to the ground and nobody cares to pick them up," the former journalist and university lecturer said in a recent interview.

In mid-2020, Rini opened a small coffee shop where she roasts beans herself at a rental house in Timika. It is called Maoke, named after a range of mountains extending Papua New Guinea's cordillera, stretching from west to east of Papua's central part.

It quickly became popular, mainly among the staff of gold mining company PT Freeport Indonesia, an affiliate of U.S. Freeport-McMoRan Inc., and Mining Industry Indonesia, which has a copper and gold mining site near the town.

Located in a small alley, the coffee house is packed every night with customers, including military and police officers posted in the area. Each cup of coffee is offered for 25,000 ($1.70) to 50,000 rupiah.

"My coffee house is the only one in Papua that serves coffee with beans originating from 13 villages in the province," Rini said, insisting that unlike her beans that range from the very sour to the fruity, others only serve two or three types of Papuan coffee.

Getting the beans, however, has become her first challenge. 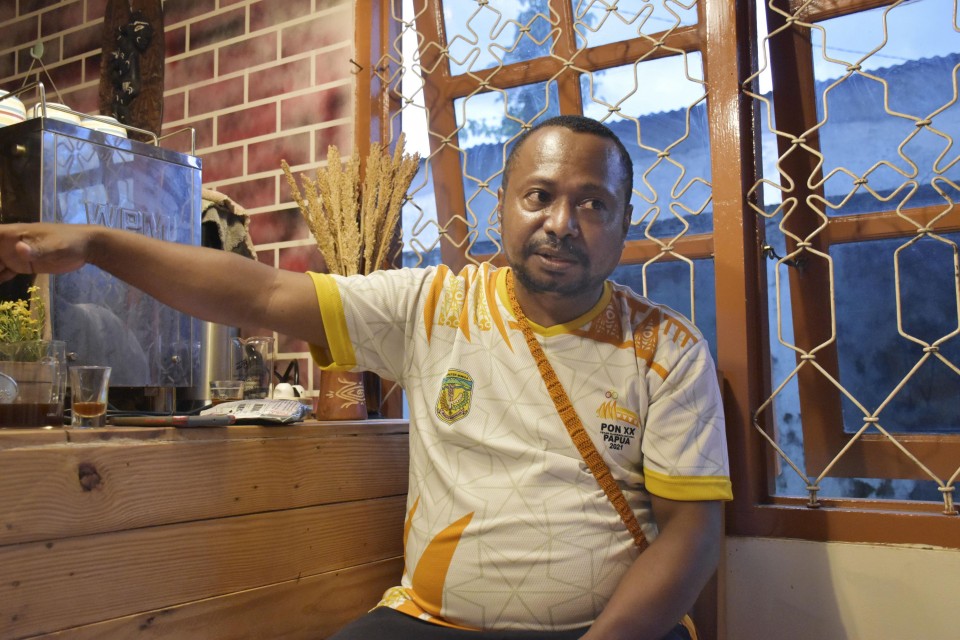 Bernard Ansaka, head of the plantation department at Mimika Regency's agricultural agency, is pictured at the Maoke coffee shop in Timika, Papua Province in eastern Indonesia on Nov. 13, 2021. (Kyodo)

Papua is mostly covered by high mountains broken up by valleys, while its lowland is clothed in dense, tropical rainforests. Traveling from one city to another can only be done primarily by air or river due to a lack of road infrastructure.

Since its launch in 2014, President Joko Widodo's administration has been extensively developing road infrastructure in the province. But in some areas, the development is disrupted by attacks by the Free Papua Movement, a rebellious movement seeking Papua's independence from Indonesia.

"We sometimes need choppers to go to the highlands to take the coffee beans down," said Bernard Ansaka, head of the plantation department of a local agricultural agency.

He said that renting a helicopter costs 65 million rupiah for a one-way trip.

"If we do it by land, we must walk, passing through the jungle for three to four days in a bad security situation in some areas."

The trip must sometimes be continued by a speed boat that costs 45 million rupiah.

"This geographical condition makes Papuan coffee very expensive," Rini said. In addition to the transportation cost she has to cover, she pays local farmers or priests, who bring the coffee beans from the farmers, between 130,000 and 150,000 rupiah per kilogram.

The average export price of coffee from other parts of Indonesia is 90,000 rupiah per kilogram.

The quality of the beans is another problem. In the beginning, the priests who helped native Papuan farmers sell the beans brought her unsorted, unpeeled, and undried ones.

Along with Ansaka, the department head, Rini continues to ask the priests and local farmers to give her good, dried beans so she can quote premium prices.

"The current challenge is to improve post-harvest management -- how to harvest properly, dry and peel the beans up to get good-quality beans -- at the farmers' level," Ansaka said.

According to Ansaka, Papuan farmers lack adequate knowledge about coffee, let alone its cultivation techniques. They even did not know that trees growing up near their houses, or even inside their yards, were coffee trees, he says.

"Yesterday, I got 5 kg of coffee beans from Tsinga," a village in Papua's Mimika Regency, she said. "But there is no guarantee I can get the same amount regularly."

However, both Ansaka and Rini are resolved to help the farms see that their coffee can be a precious commodity.

Ansaka said the farmers cannot bring the plants down from the highlands because they dry up. "It's also impossible to bring cassava down because it's too heavy. But you can bring up to 100 kg of coffee beans and get a lot of money," which is what he tells the farmers.

Rini has a bigger dream: helping Papuan coffee farmers to become independent of her or other coffee shops. This means being proud of their own coffee products and brands.

"We have to prove to them first that coffee can become a source of income, including by buying the beans they harvest."