Japan took the silver medal in women's curling Sunday at the Beijing Winter Olympics following a heavy 10-3 loss to Great Britain in the final. 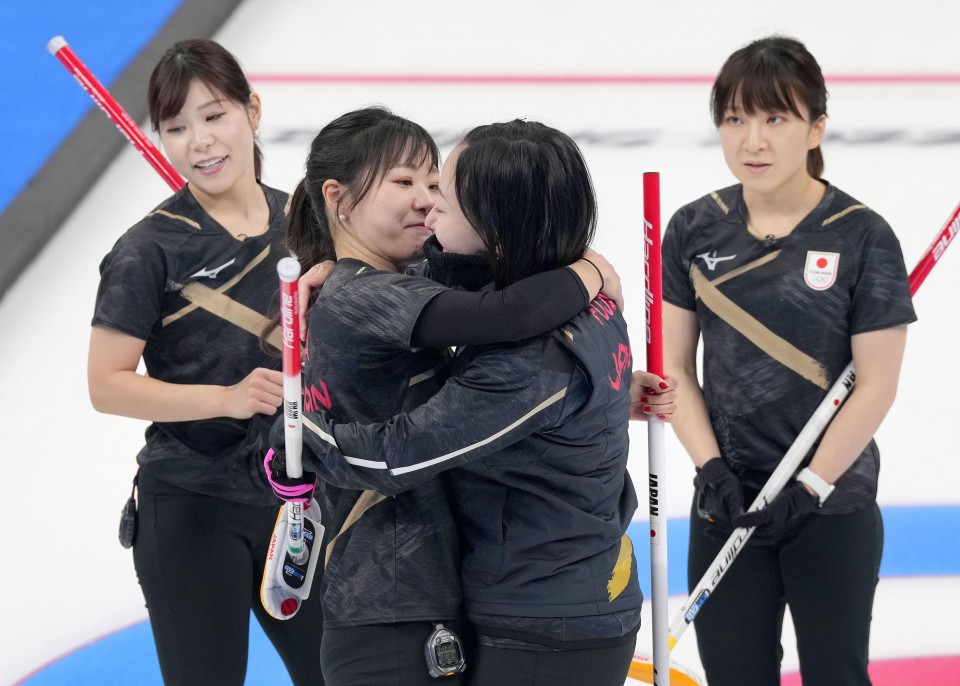 "The color of the medal has changed from four years ago, but to be honest, I'm a bit disappointed," Fujisawa said.

"But I'm really happy I could play until the final day with these teammates, and I'm so proud of the team."

Known in Japan by its club name, Loco Solare, the team from the city of Kitami in Hokkaido advanced to the gold medal game by stunning world champion and tournament favorite Switzerland 8-6 in the semifinal.

But Great Britain, beaten for bronze by Japan in 2018, dominated the rematch at Beijing's National Aquatics Centre, starting strongly and eventually sealing the contest with four points in the seventh end.

The gold medal swept away unhappy memories for British skip Eve Muirhead, who missed badly with a chance to win bronze with her last shot of the tournament in Pyeongchang, South Korea.

"In Pyeongchang, coming fourth was incredibly tough," Muirhead said. "It took me a long time to get over that and even now I still think of that shot. Hopefully it will be out of my mind now."

Her Scotland-based team had already exacted a measure of revenge for that defeat by overwhelming Japan 10-4 on Tuesday before the two sides finished the round-robin phase of the tournament with identical 5-4 records.

Both advanced to the semifinals via a tiebreaker based on draw-shot accuracy, while Canada, which also finished the round robin 5-4, was eliminated. 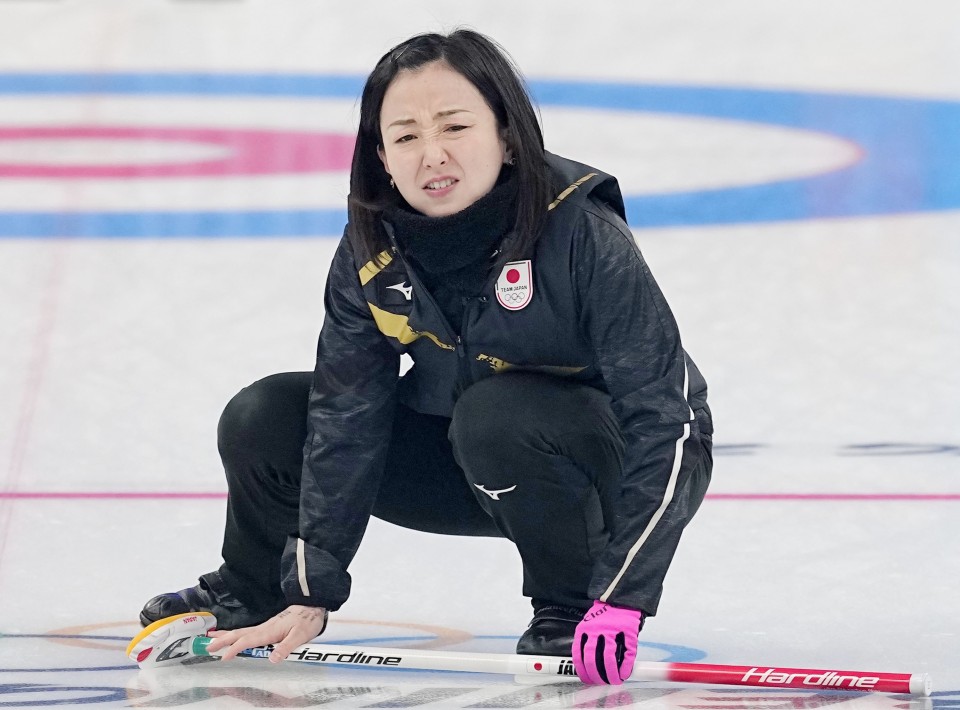 Japanese skip Satsuki Fujisawa reacts to her shot in the fifth end of the women's curling gold medal game against Great Britain at the Beijing Winter Olympics on Feb. 20, 2022, at the National Aquatics Centre in Beijing. (Kyodo) ==Kyodo 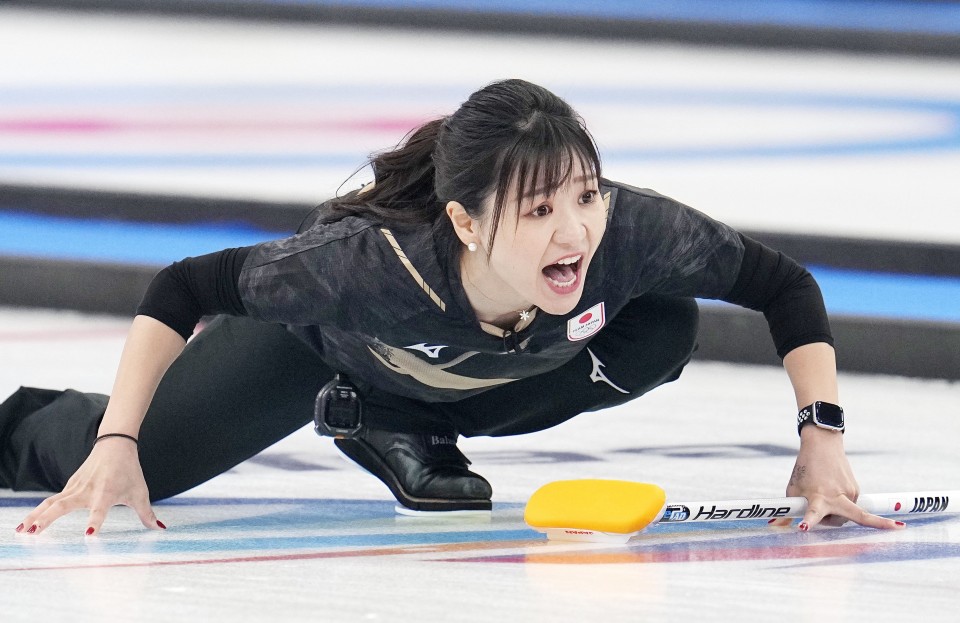 Chinami Yoshida of Japan gives instructions to her teammates during the second end of the women's curling gold medal game against Great Britain at the Beijing Winter Olympics on Feb. 20, 2022, at the National Aquatics Centre in Beijing. (Kyodo) ==Kyodo

Despite falling in the final, Fujisawa and her teammates -- Yumi Suzuki, the Yoshida sisters, Chinami and Yurika, and reserve Kotomi Ishizaki -- once again provided one of Japan's most enthralling Winter Olympic storylines and will be warmly welcomed home in the northernmost prefecture of Hokkaido.

"It was a wonderful experience, I had so much fun," lead Yurika said. "Of course we lost, but to be here with all my teammates and (coach J.D. Lind)...I am just super grateful for everything."

Starting the final with the hammer, Great Britain opened with a two-ender, then made Fujisawa take a difficult last shot to prevent a steal in the second.

The European champions blanked the third to retain the hammer but could only take one in the fourth, its bid for a pair coming up short on a heavy final throw.

Japan trailed 4-1 after the fifth, giving up one with the hammer after Fujisawa could not find the target on a hit-and-roll attempt.

It had to settle for one in the sixth after its second counter rolled centimeters too far for a two-ender.

Four-time Olympian Muirhead effectively ended the contest in the seventh with a takeout that gave her team four counters and an 8-2 lead. With Great Britain taking another two in the ninth, Japan conceded without playing the 10th end.

After the team collected its silver medals, Lind spoke proudly of the players who have helped bring their once-fringe sport to mainstream attention in Japan.

"The best trait of this team is how positive they are and how they work together through difficult situations," Lind said. "I only hope that everybody (in Japan) is proud of what they did and can relate to their spirit out there."

Muirhead, who has staked her place among curling's greats, also spoke fondly of a Japanese team which has shared some of the defining moments of her career.

"I'm super happy for those girls to get on the podium beside me," the 31-year-old said. "We always have strong battles, so it's really nice to stand next to them." 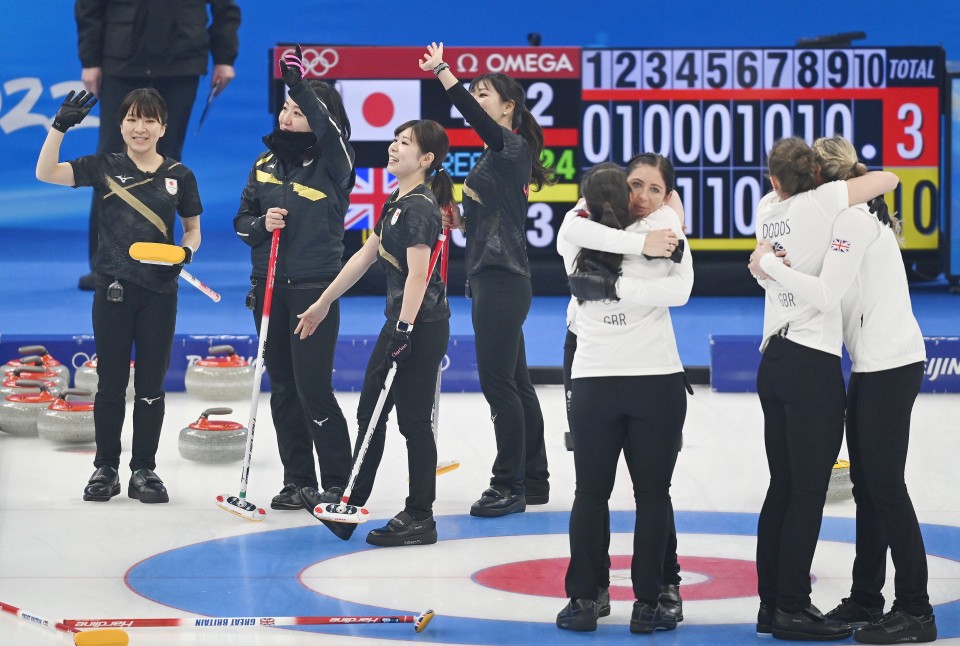 Great Britain curlers (white) celebrate after winning the women's gold medal game against Japan at the Beijing Winter Olympics on Feb. 20, 2022, at the National Aquatics Centre in Beijing. (Kyodo) ==Kyodo