Sekiwake Mitakeumi said Monday he fought with a new-found intensity at the New Year Grand Sumo Tournament, where he clinched his third Emperor's Cup and a promotion to ozeki.

The 29-year-old Mitakeumi beat the sport's sole yokozuna, Mongolian-born juggernaut Terunofuji, in the final bout of the 15-day meet Sunday at Ryogoku Kokugikan to take the title with a 13-2 record. 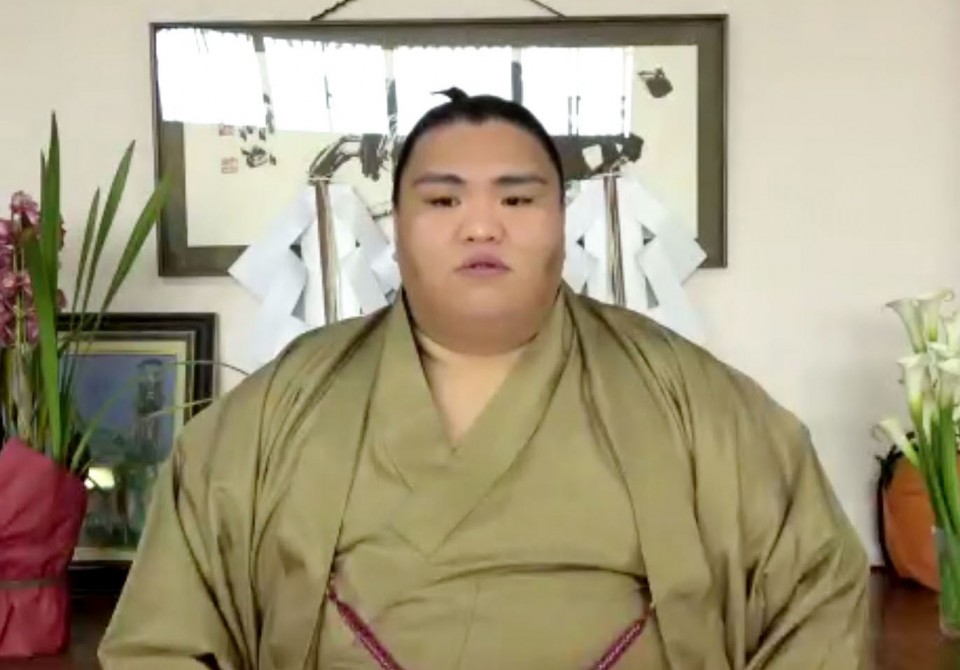 Having started the day with a one-win lead over Terunofuji and two other wrestlers, a loss to the imposing yokozuna would have resulted in a playoff to determine the championship.

But after an initial tussle, Mitakeumi managed to penetrate his taller opponent's defense and force him over the edge.

"I was able to wrestle (at the tournament) with an unprecedented spirit," Mitakeumi said during an online press conference.

The Nagano Prefecture native has held the third-highest rank of sekiwake over the past four meets. His promotion to the second-highest rank of ozeki is a formality, having achieved the Japan Sumo Association's benchmark of 33 wins across three tournaments.

According to the JSA, he will be the first ozeki from Nagano in 227 years, with Edo Era great Raiden the last wrestler from the central Japan prefecture to hold the rank.

"I'm really happy that even people unfamiliar with sumo will hear the name Raiden," Mitakeumi said.

The JSA board will make Mitakeumi's promotion official at an extraordinary meeting on Wednesday.

The powerfully built grappler's ascent is a welcome development for the association following the recent retirement of yokozuna Hakuho, now a sumo elder under the name Magaki, and problems within the ozeki rank.

Both current ozeki, Takakeisho and Shodai, will start the next tournament with demotion-threatened "kadoban" status. The former missed most of the New Year meet through injury, while the latter posted a losing record of 6-9, his latest in a series of subpar performances.

Mitakeumi had looked to be on the path to ozeki promotion after winning his first top-division championship as a sekiwake in July 2018, but a subsequent run of inconsistent results saw him bounce up and down in the rankings.

He won his second top-division title in September 2019, again as a sekiwake, but once again failed to follow up with the victories needed for promotion.

Having finally reached the target while winning his third Emperor's Cup, Mitakeumi is focused on continuing his climb toward the highest rank of yokozuna.

"There is still one higher level to reach, so I have to make that my goal," he said.