But efforts to tackle diplomatic challenges could be complicated by Biden's weakening political standing in his own country, where he faces headwinds due to the unabated coronavirus pandemic, rising inflation and sluggish popularity in a year of crucial midterm elections.

Pitching his extensive experience in Congress and foreign policy as a longtime senator and former vice president, Biden took over from Republican Donald Trump on Jan. 20 last year with a pledge to beat COVID-19, rebuild the pandemic-hit economy and restore America's leadership on the global stage.

One year in, however, the picture has been mixed. 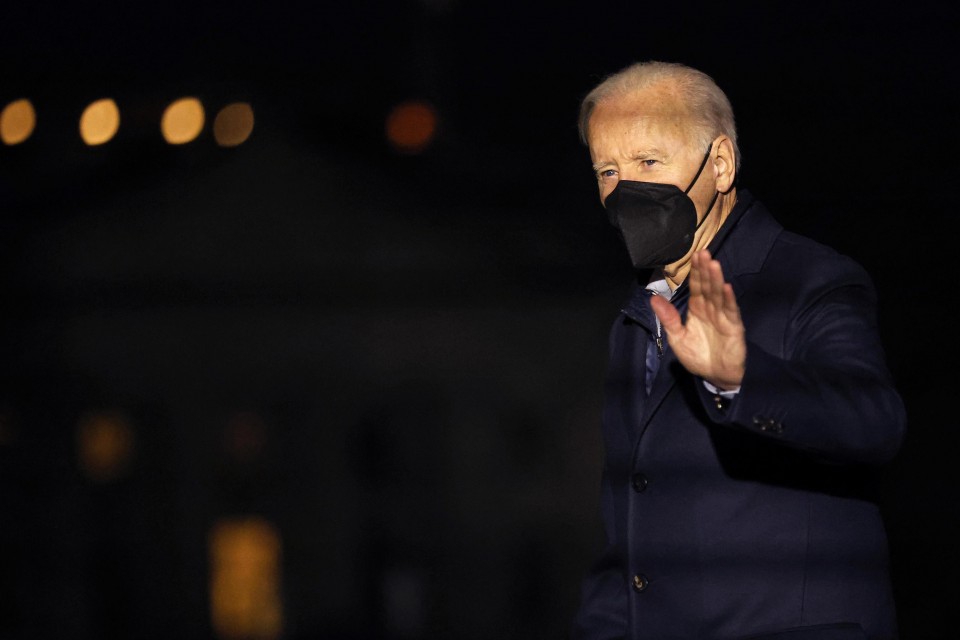 U.S. President Joe Biden waves to journalists as he returns to the White House on Jan. 17, 2022, in Washington. (Getty/Kyodo)

The administration under the Democratic president has credited itself for COVID-19 vaccination efforts, which it says have helped bring the "biggest year of job growth in American history," while touting the enactment of a $1.9 trillion coronavirus relief package and a $1 trillion infrastructure investment bill.

But a series of setbacks have arisen recently, with Biden's signature $1.75 trillion social safety net and climate bill facing opposition from a Democrat who holds a critical vote in the narrowly divided Senate, and COVID-19 cases surging as the highly contagious Omicron variant sweeps the country.

On the diplomatic front, what tops the list of the administration's missteps is the chaotic U.S. troop withdrawal from Afghanistan in August to bring an end to its 20-year war, said James Lindsay, a foreign policy expert at the Council on Foreign Relations.

But he said the United States saw "some success" in getting its allies to coordinate more closely with Washington on policy toward China, touching on a deal between Australia, Britain and the United States that will help Canberra acquire nuclear-powered submarines in the face of Beijing's maritime assertiveness.

The announcement in September of the trilateral security partnership, dubbed AUKUS, created a diplomatic rift with France, a U.S. ally that was blindsided by the deal despite being a key player in the Indo-Pacific.

But Lindsay said, in general, the administration "has done a lot to try to coordinate and communicate with allies who felt neglected, ignored or dismissed" under Trump's "America First" policy and his deep skepticism toward the role of longstanding alliances.

The expert also hailed the Biden team for seeking to work in lockstep with members of the North Atlantic Treaty Organization and European partners against concerns over potential further Russian invasion of Ukraine, following its 2014 annexation of Crimea.

"America is back -- if by being 'back' you mean that it is more engaged with traditional allies and alliances, especially in Europe and Asia," said Lindsay, who served on the National Security Council's staff in the 1990s, referring to Biden's often-used phrase to reassure allies in the wake of four tumultuous years of Trump diplomacy.

"Now having said that America is back...is not to say all of the problems have been solved, or all the challenges have been mitigated or managed well," Lindsay said.

The Biden administration is expected to continue to work with allies to counter China's rise while warning Beijing of the "cost" of seeking to upend the long-rooted international order in Asia, but there will always be a possibility of events that could "scramble the picture very quickly," he added.

Risks that could lead to confrontation among the world's two largest economies include China trying to reassert control over Taiwan by force, although many pundits consider such a move unlikely to occur this year. China could also take coercive actions short of military force to intimidate the self-ruled island, which Beijing views as its own.

Concerns also remain over unanticipated incidents involving U.S. and Chinese naval forces such as in the South China Sea, where Beijing pushes its territorial claims. North Korea could also ratchet up tensions through continuing weapons tests that would require Washington to focus more on addressing Pyongyang's nuclear ambitions.

Andrew Oros, a political science professor at Washington College, called on the administration to set "strategic priorities," saying it now seems to be "outreaching to all equally."

While the U.S. exit from Afghanistan was a "tragedy" due partly to poor execution, it underscored that the United States cannot "be the solution to every problem in the world" and can be seen as a "positive" example of priority-setting, he said.

With the administration clearly looking to the Indo-Pacific region as a critical area for U.S. prosperity and security, it should avoid getting "pulled into a conflict that is going to be a stalemate in an area that is not of critical U.S. interests," Oros said.

He also said it is incumbent on the government to explain its policy for deepening U.S. economic engagement in the Indo-Pacific this year. Biden's plans have remained vague on the matter, with Trump having pulled the United States out of a Pacific free trade agreement originally known as the Trans-Pacific Partnership.

But the professor noted that the prolonging COVID-19 crisis may distract U.S. policymakers from laying out priorities in terms of foreign policy, while an appetite for new trade agreements in the United States will likely remain low as supply chain constraints emanating from the pandemic and inflation are hitting households.

Lindsay indicated that Biden's current political standing may affect the credibility of his foreign policy, citing his sagging poll numbers, difficulty in getting his domestic agenda through Congress and bleak prospects for the Democratic Party to hold on to both houses of Congress in the November midterm elections.

Noting that Trump remains "incredibly popular" with the base of the Republican Party, he said questions are emerging on "whether or not it's Joe Biden that is going to be the aberration," with the United States potentially returning to Trump and "America First," or some version of it, following the 2024 presidential election.

Ali Wyne, a senior analyst at Eurasia Group, also said the greatest challenge for the Biden administration may be "the unpredictability" of American domestic politics, which tends to make its allies and partners "nervous about the potential for instability in U.S. foreign policy from one administration to the next."