China's economy is expected to slow down ahead of the ruling Communist Party's twice-a-decade congress in fall 2022 as President Xi Jinping's radical "zero corona" policy and socialist ambition are set to choke private spending in the country.

Even after the end of the Beijing Winter Olympics, slated to start Feb. 4, the Communist-led government is likely to continue implementing strong anti-epidemic measures including locking down major cities and suspending all public transportation services. 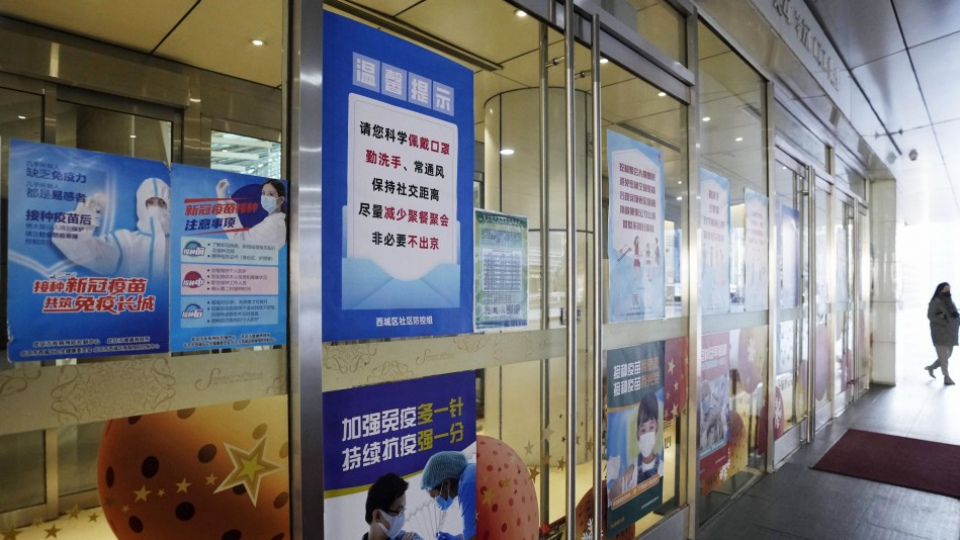 A shopping mall in Beijing is closed on Jan. 16, 2022, after the first person in the Winter Olympic host city to be diagnosed with the Omicron coronavirus variant was found to have stopped by. Beijing is stepping up measures to keep the coronavirus at bay. (Kyodo) ==Kyodo

To make an achievement in the economic field to secure a controversial third term as party leader at the congress, Xi would also promote "common prosperity," aimed at reducing income gaps at home, by levying more regulations on the nation's lucrative sectors.

Consumption in China has been "tepid" as the movements of people have recovered only to half the level before the coronavirus outbreak began nearly two years ago, said Kokichiro Mio, a senior researcher at the NLI Research Institute in Tokyo.

A scholar familiar with the Chinese government's thinking said, "The Communist Party's zero corona policy is certain to remain in place almost throughout 2022, given that President Xi has been keen to end the congress successfully after the Beijing Olympics."

"For at least another one year, Chinese citizens and companies would be frustrated by severe restrictions by authorities and lose their motivation to increase spending and investment. This would put serious downward pressure on the economy," the scholar, speaking on condition of anonymity, said.

The world's second-largest economy grew 8.1 percent in 2021 from the previous year with domestic demand recuperating from the coronavirus shock, marking the biggest expansion in 10 years, government data showed Monday.

The economy, however, edged up only 4.0 percent in the October-December period of 2021 alone, as the outlook has become dim amid mounting fears about another wave of infections, first detected in China's central city of Wuhan in late 2019.

In Xi'an, more than 2,000 people have been infected with the virus for around one month since early December, prompting municipal authorities to lock down the central Chinese city of 13 million since the middle of the month.

Tianjin, known as a key gateway to Beijing, has also conducted COVID-19 nucleic acid testing targeting all the 14 million residents since earlier this month, as community infections with the highly contagious Omicron variant were identified.

The Beijing government said Saturday that it has found its first case of the Omicron variant.

In Shanghai, China's largest commercial hub, some restaurants and stores have been closed since infections were confirmed there. 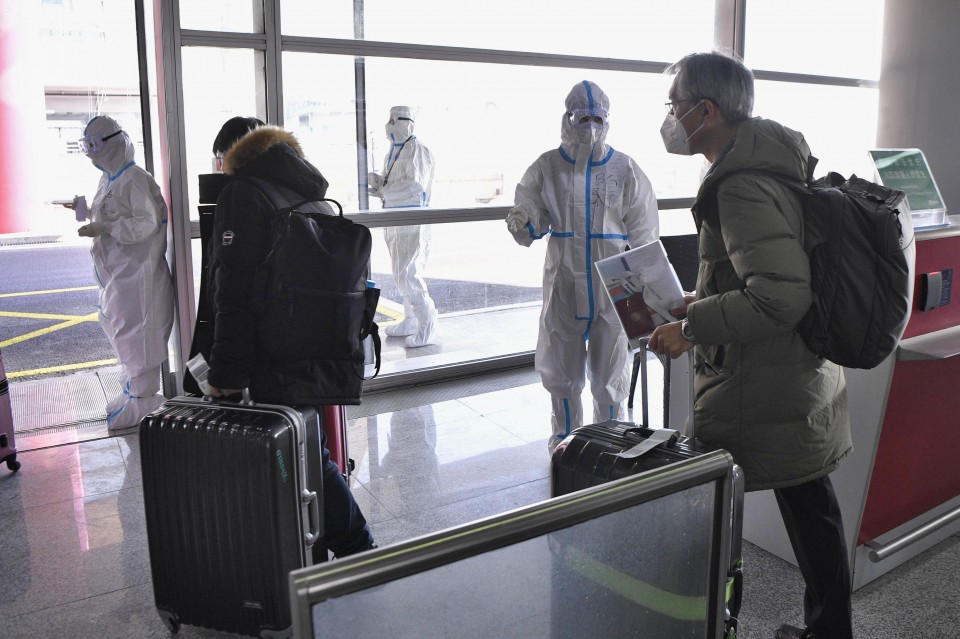 Officials wearing protective gear work at Beijing Capital International Airport on Jan. 4, 2022, amid concerns over the novel coronavirus ahead of the Beijing Winter Olympics starting next month. (Kyodo) ==Kyodo

Hiroyuki Tanaka, a 36-year-old Japanese employee in the city said, "We are not in a situation where we can do business as usual. What we have to do is to stay in Shanghai and stay home."

"Many Chinese people have refrained from going outside and they have tighten their purses as they are feeling anxiety about the future," he said, adding, "Under such circumstances, it is very difficult for the Chinese economy to maintain growth momentum."

In January, the World Bank said in a report that it has cut its forecasts for China's economic expansion in 2022 to 5.1 percent, down from 5.4 percent against a backdrop of the pandemic.

Tanaka said, "I think the pace of China's economic growth would be much slower than the World Bank estimates. I don't know what can be an impetus to the Chinese economy this year unless the coronavirus crisis recedes."

Xi's push to attain common prosperity has been also fanning concern that the most populous country would become a less attractive market, as the goal may place heavy burdens on the rich so that the government can coercively rectify economic inequality.

Drastic policy changes designed to put emphasis on income distribution might "hinder technological progress based on the free ideas of the private sector," said Kenta Maruyama, an economist at Mitsubishi UFJ Research and Consulting Co. in Tokyo.

Indeed, the Communist Party has been bolstering surveillance of the nation's IT giants to curb their monopolistic behavior and disorderly capital expansion, sparking worries that innovation of the Chinese high-tech industry would be impeded.

Chinese big enterprises and business leaders are also believed to be compelled by the central authorities to take steps that could contribute to narrowing income disparities, such as making donations and providing social supports.

"If the government uses common prosperity as a means of power struggle and moves ahead with it in an unpredictable way, that could put a sharp brake on the Chinese economy. Common prosperity is a double-edged sword," Maruyama said.

Some pundits, meanwhile, said a potential escalation of tensions between China and Taiwan would make foreign firms -- especially those in democratic countries -- reluctant to invest in the mainland, which would deal a crushing blow to the broader economy in 2022.

Speculation is rife that Xi's leadership could take military action against democratic Taiwan to reunify the self-ruled island with the mainland, in the run-up to the party congress where he would attempt to lay the groundwork to hold on to power for life in China.

But Jeff Kingston, director of Asian Studies at Temple University Japan, denied the possibility, saying, "There is little chance of an invasion of Taiwan because it is a high-risk option that could backfire on Xi."

China and Taiwan have been governed separately since they split in 1949 as the result of a civil war. Their relations have deteriorated since independence-leaning Tsai Ing-wen became the island's president in 2016.