The Nikkei index plunged Wednesday to its lowest level in nearly five months due to increasing concerns about Japan's economic recovery after the country logged its highest number of coronavirus cases the day before. 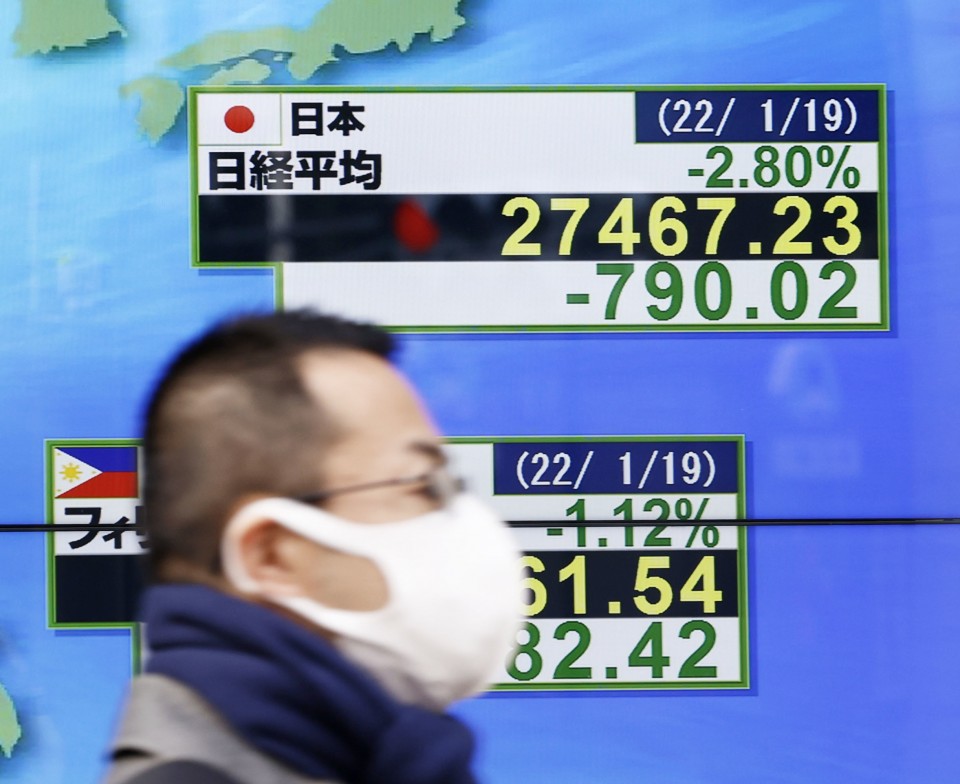 A financial board in Tokyo shows on Jan. 19, 2022, the Nikkei Stock Average ending at its lowest level in nearly five months. (Kyodo)

"Investors have been cautious about the recent surge in infections, as it may disrupt supply chains further and spur inflation," said Maki Sawada, a strategist at Nomura Securities Co.'s investment content department.

The U.S. dollar fell into the lower 114 yen range, as investors fled to the perceived safety of the yen following an overnight fall in U.S. shares in the wake of a rise in Treasury yields, dealers said.

The yield on the benchmark 10-year Japanese government bond inched down 0.010 percentage point from Tuesday's close to 0.135 percent, as investors bought the safe-haven debt on the sharp fall in Tokyo stocks. Bond yields move inversely to stock prices.

The Tokyo market plummeted from the outset, sending the Nikkei index below the 28,000 line. The benchmark extended its losses in the afternoon, briefly falling over 900 points on a decline in U.S. stock futures and some weak Asian markets.

Sentiment was dampened by increasing uncertainty over the continuation of Japan's economic recovery.

Tokyo and other areas are asking the central government to place them under a quasi-state of emergency after the country logged over 30,000 daily COVID-19 cases Tuesday, a figure surpassing the previous record of 25,992 confirmed in August last year.

Selling was led by large caps consisting of high-tech shares after the technology-heavy U.S. Nasdaq index fell over 2 percent on Tuesday. Issues such as Tokyo Electron widened their losses and weighed down the market further in the afternoon, she added.

Meanwhile, a rise in crude oil prices, which soared to their highest level since October 2014 in New York trading, added to the negative mood as the upward trend could pressure corporate profits, brokers said.

On the First Section, declining issues outnumbered advancers 2,111 to 58, while 15 ended unchanged.

Sony Group plummeted 1,820 yen, or 12.8 percent, to 12,410 yen, a day after Microsoft Corp. said it would acquire gaming company Activision Blizzard Inc., raising concerns that the move will intensify competition within the industry.

Exporters such as automobile manufacturers were also hit as the yen strengthened against the dollar. Suzuki Motor was down 163 yen, or 3.4 percent, at 4,590 yen, and Mazda Motor sagged 28 yen, or 2.9 percent, to 933 yen.

Toyota Motor dropped 120.5 yen, or 5.0 percent, to 2,303.0 yen, a day after the automaker said it may not reach its global output target of 9 million vehicles for the year through March.

Japan to put Tokyo, 12 other areas under COVID quasi-emergency