The original curtain-raiser for Japan's new elite rugby union competition, set for Friday, was canceled after six players from one team tested positive for the coronavirus, but Kobe and Tokyo-Bay Urayasu did not disappoint in a nail-biting encounter at Kobe Universiade Stadium. 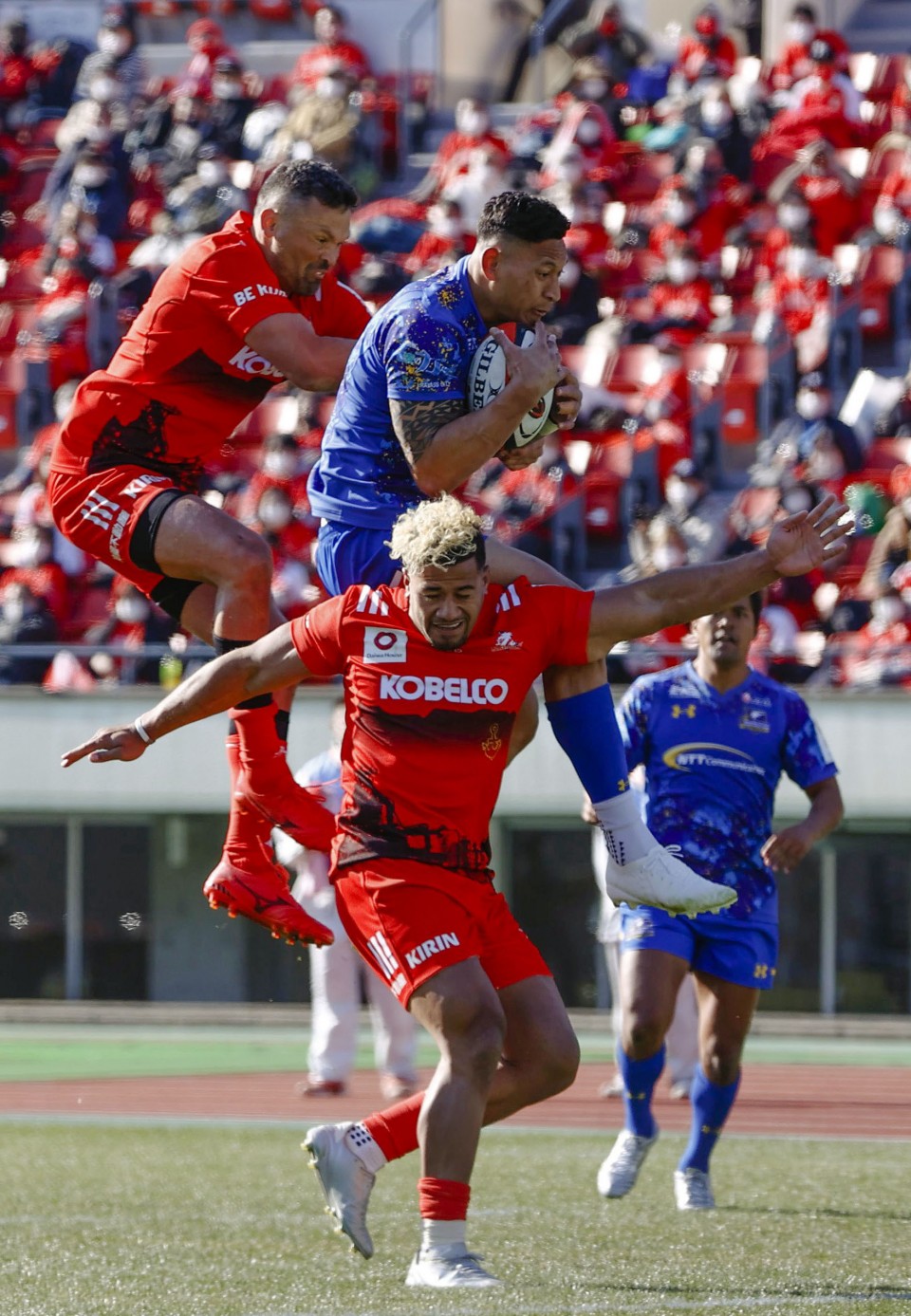 Rugby: Japan give gritty performance but fall 29-20 to Scotland

Folau, a record three-time winner of the John Eales medal for Australia's best player, slotted in at fullback for the visitors and scored two tries to herald the new competition, which aims to recruit even more of the world's top players than the previous Top League and build upon the excitement generated by Japan's successful 2019 World Cup.

Richard Buckman scored the league's first try in the third minute for Kobe, the home side stringing together phases on the visitors' tryline before the center went over following a pass from flyhalf Aaron Cruden, who added the extras.

Folau quickly showed his prowess by powering his way through a crowd of Kobe players in the opposing half. He had another run in which he shoved aside hooker Ryuhei Arita before getting his first try with another carry.

A pass from Japan lock James Moore sent Folau clear deep in the Steelers half and he just grounded the ball over the try-line, with fly-half and former Super Rugby star Otere Black kicking the conversion to level the scores.

Things got worse for Steelers. Wing Ataata Moeakiola deliberately knocked-on in the 15th minute, landing himself in the sin bin and handing the Shining Arcs a penalty try. 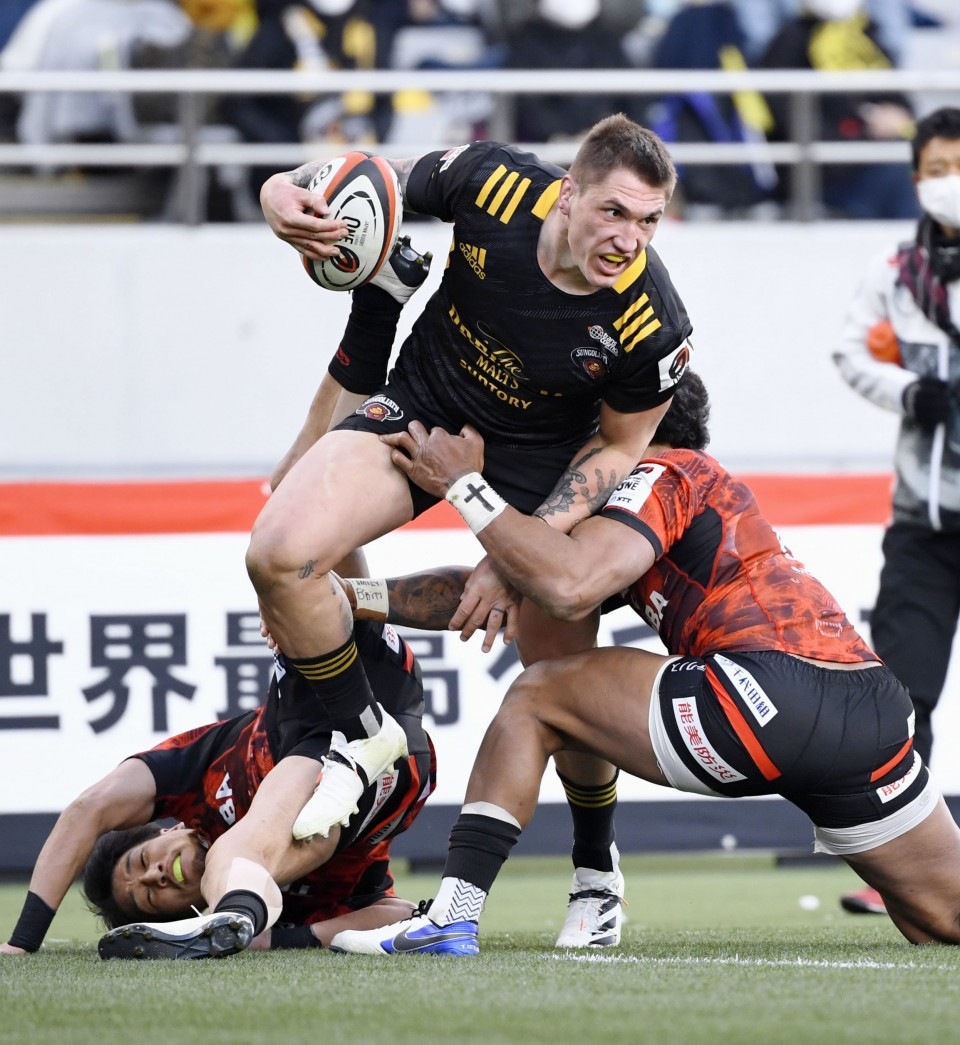 Tokyo Suntory Sungoliath's Sean McMahon (C) breaks through the defense on his way to scoring a try during the first half of a Japan Rugby League One match against Toshiba Brave Lupus Tokyo on Jan. 8, 2022, at Ajinomoto Stadium in Chofu, western Tokyo. (Kyodo) ==Kyodo

But the hosts held on despite being pinned back for most of the half, and Japan fullback Ryohei Yamanaka played in Brodi McCurran to finish off a superb counter down the left touchline just before the break to cut the deficit to 14-12.

Cruden reclaimed the hosts' lead with a penalty 10 minutes into the second half as the half-time introduction of Japan's 2019 World Cup props Isileli Nakajima and Koo Ji Won had a telling impact for the Steelers.

A 68th-minute Cruden penalty stretched the Steelers lead, but Black nailed one back for the battling Shining Arcs three minutes later before a moment of world-class linking-up seemed to settle the tie.

Black's low punt to the left of the goal posts was covered by both Moeakiola and Yamanaka from the home side but Folau outjumped and muscled them to touch down, giving the visitors a 24-18 lead with four minutes left.

But the Steelers weren't done. The hosts pressed downfield after the hooter before scrum-half Daiki Nakajima grabbed an 84th-minute try. That gave Cruden the chance to win it at the death, only for his effort from an angle on the left to miss the target.

At Tokyo's Ajinomoto Stadium, new import McKenzie kicked 25 points, while No. 8 McMahon, the man of the match, scored three tries, two to open the second-half as Sungoliath overturned a three-point half-time deficit. The Brave Lupus' six tries, however, prevented Sungoliath from collecting a bonus point.

At Chiba Prefecture's Kashiwanoha Park Stadium, Tamura kicked two early penalties for the Eagles en route to a 13-5 first-half lead and the visitors never looked back.

League One's first division is comprised of 12 clubs, with each team playing 16 games through May before the top four teams compete in a championship playoff.