Dressed in colorful aristocratic robes and hats, "mariashi" players entertained visitors to Kyoto's Shimogamo Shrine earlier this month with the year's first game of "kemari," an ancient football game resembling "keepy-uppy," the objective of the game being to keep the ball in the air.

Sixteen members of the Shukiku Hozonakai, a kemari preservation society which was established in 1907 at the request of Emperor Meiji, took part in the "Kemari Hajime" festival at the shrine for the first time in two years on Jan. 4. Shimogamo Shrine has a history of hosting kemari performances, with Emperor Go-Toba and others enjoying the pastime. 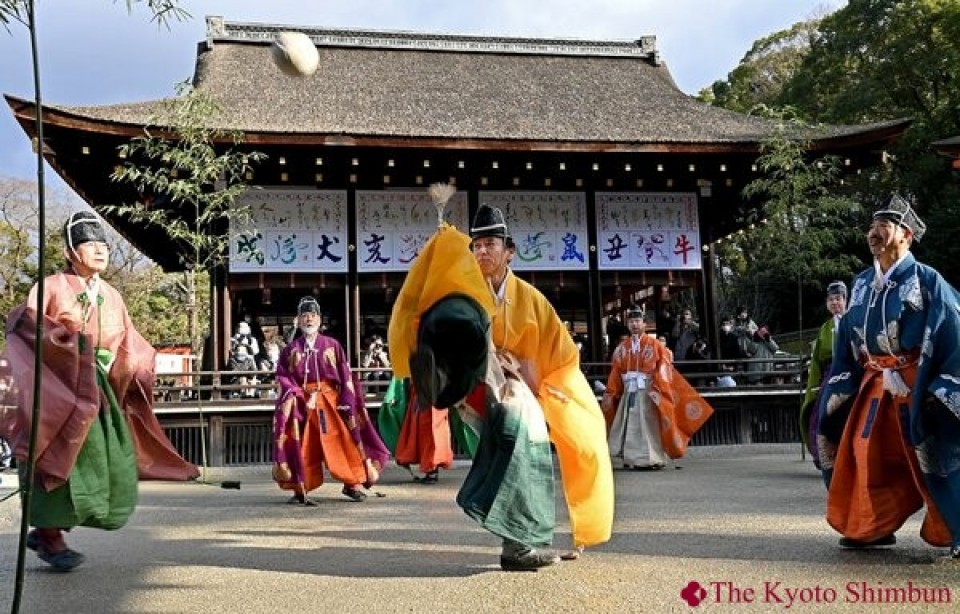 Members of the Shukiku Hozonakai play kemari at Shimogamo Shrine in Kyoto on Jan. 4, 2022.

It has been performed as an offering at the shrine for over half a century but was canceled last year due to the spread of the coronavirus.

Amid light rain, eight players set up the Kemari court following the Shinto ritual and started to kick the "mari" deerskin ball in the air.

In order to prevent the spread of infection, spectators were asked to refrain from cheering but they applauded nice plays.

The preservation society had to scrap practice from March 2019 because of the coronavirus pandemic and only started up again last month. Tsunehiro Ueda, 75, who heads the society said, "I was worried about getting injured but I was able to make an offering without incident. It was a good start."

Works of artists with disabilities exhibited in Kyoto