Another wave of novel coronavirus infections has sparked concern in China that the upcoming Beijing Winter Olympics cannot be held in their complete form, prompting the authorities to take some coercive measures to curb the latest outbreak.

President Xi Jinping has also been struggling to dispel the negative image of a "diplomatic boycott" initiated by the United States, as he has been trying to use the global sporting event to cement his grip to secure a controversial third term as leader. 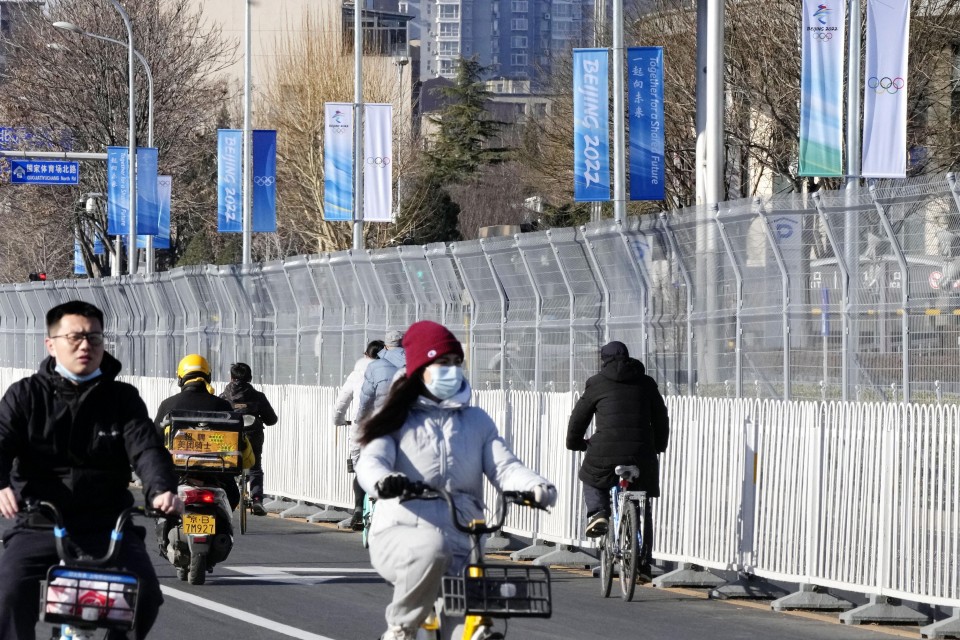 People ride bicycles in Beijing on Jan. 3, 2022, with banners of Beijing Winter Olympics seen ahead of the games' start in February. (Kyodo) ==Kyodo

On Feb. 4, Beijing is set to become the first city to hold both the summer and winter games, but the number of new infections has been rising due to failure to stem the spread of the virus, first detected in China's central city of Wuhan in late 2019.

As the Tokyo Summer Games were held without spectators at almost all venues, the Communist-led government has been forced to take whatever steps it can in a bid to host a safe and secure Olympics, diplomatic sources said.

The increase in new infections had apparently peaked in late February 2020 in the mainland on the back of the Communist Party's radical "zero corona" policy, but China is now wary of the highly contagious Omicron variant, they said.

In China's Xi'an, more than 1,000 people have been infected with the virus for around one month since early December, and municipal authorities have locked down the city of 13 million since the middle of the month.

The Beijing government, meanwhile, has urged residents not to move out of the capital unless necessary, ever since late October when COVID-19 cases rose in the city after a week-long national holiday early in the month.

Moreover, people in regions where new infections have been identified have been prohibited from entering Beijing, while visitors to the capital have been compelled to have a negative certificate of a PCR test taken within 48 hours.

"The worst-case scenario for China is that the infectious situation will deteriorate, putting pressure on it to hold a smaller-scale athletic festival," one of the diplomatic sources said.

The Tokyo Olympics took place from July 23 through Aug. 8 under a COVID-19 state of emergency against a backdrop of a resurgence of infections in Japan.

"Xi wants to host the Olympics in their complete form to show to the world that China has overcome the novel coronavirus. He believes it will be conducive to ensuring his appointment" at the ruling party's twice-a-decade congress in fall, the source said.

"The determination is unwavering. Xi's leadership is expected to accelerate efforts to tackle the pandemic in the run-up to the Beijing Olympics, regardless of whether Chinese citizens are fed up with strong restrictions," he added.

In addition to the epidemic at home, China has been irritated by announcements by the United States and other democratic nations including Britain and Australia not to send their government officials to the Beijing Games, the sources said.

A diplomatic boycott, which would not affect the participation of U.S. athletes, is seen as a response to China's alleged human rights abuses against Uyghur Muslims in its far-western Xinjiang region that Washington has labeled as "genocide."

While refraining from using such an expression, Japan and some countries have followed suit, prodding China to call for them not to smear the image of the Asian power.

"It is athletes, instead of politicians clamoring for 'boycott' out of selfish political gains, that should be in the spotlight," Chinese Foreign Ministry spokesman Zhao Lijian told reporters in Beijing in early December.

"In fact, no one would care whether these people come or not, and it has no impact whatsoever on the Olympics to be successfully held by Beijing," he added.

Xi pledged last week to make the Beijing Olympics a success, saying in his televised speech on New Year's Eve, "We will spare no effort to present a great games to the world. The world is turning its eyes to China, and China is ready."

A source familiar with the Communist Party's thinking said, "China has been eager to hold the Beijing Olympics, with national pride at stake, so the diplomatic boycott has become one of the headaches for Xi."

"What China has been also worried about is that the image of it would worsen if it retaliates too much for nations deciding to implement a diplomatic boycott. But Xi cannot forgive them. China has been frustrated," the source said.