Sayuri Oyamada, a Japanese film and television actress based in New York City for the past decade, has used the slowdown in filming caused by the coronavirus pandemic to build a local business selling "onigiri" rice balls made with innovative combinations of traditional and American ingredients. 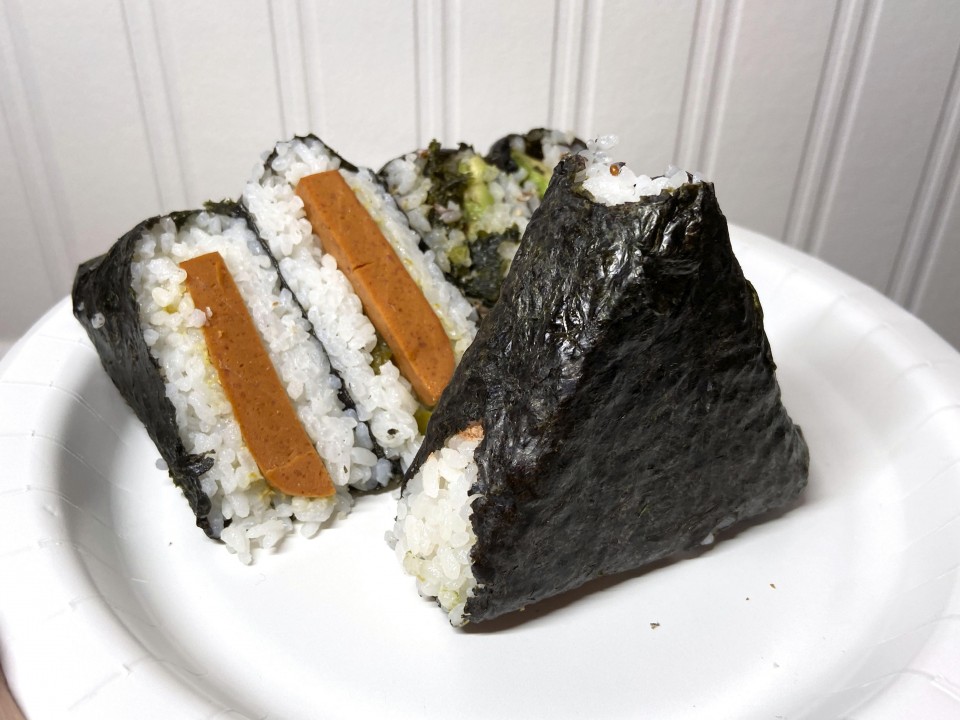 The products retail for around $4 each (roughly 450 yen) at several Japanese markets in Manhattan and Brooklyn as well as at pop-up events.

"When the city went into coronavirus lockdown in March 2020, I ended up stuck at home without any acting work," Oyamada recently told Kyodo News. "It was a depressing time, just passing the days with nothing on the horizon."

The release of the film she had most recently appeared in -- the horror movie "Bashira," directed by Academy Award-winning animation artist Nickson Fong -- was also postponed at the time as the pandemic intensified across the United States, leading to theater closures and widespread event cancellations.

The opportunity to try her hand at original onigiri recipes arose that summer when the city's lockdown measures gradually eased. A local Japanese food market chain, thinking it a novel idea to have an actor make onigiri, suggested Oyamada do so as a short-term collaboration, and she readily accepted.

"I had no food industry experience, but I decided to give it a shot anyway," said Oyamada, who had previously branched out from acting with other creative projects such as a T-shirt line featuring her drawings. 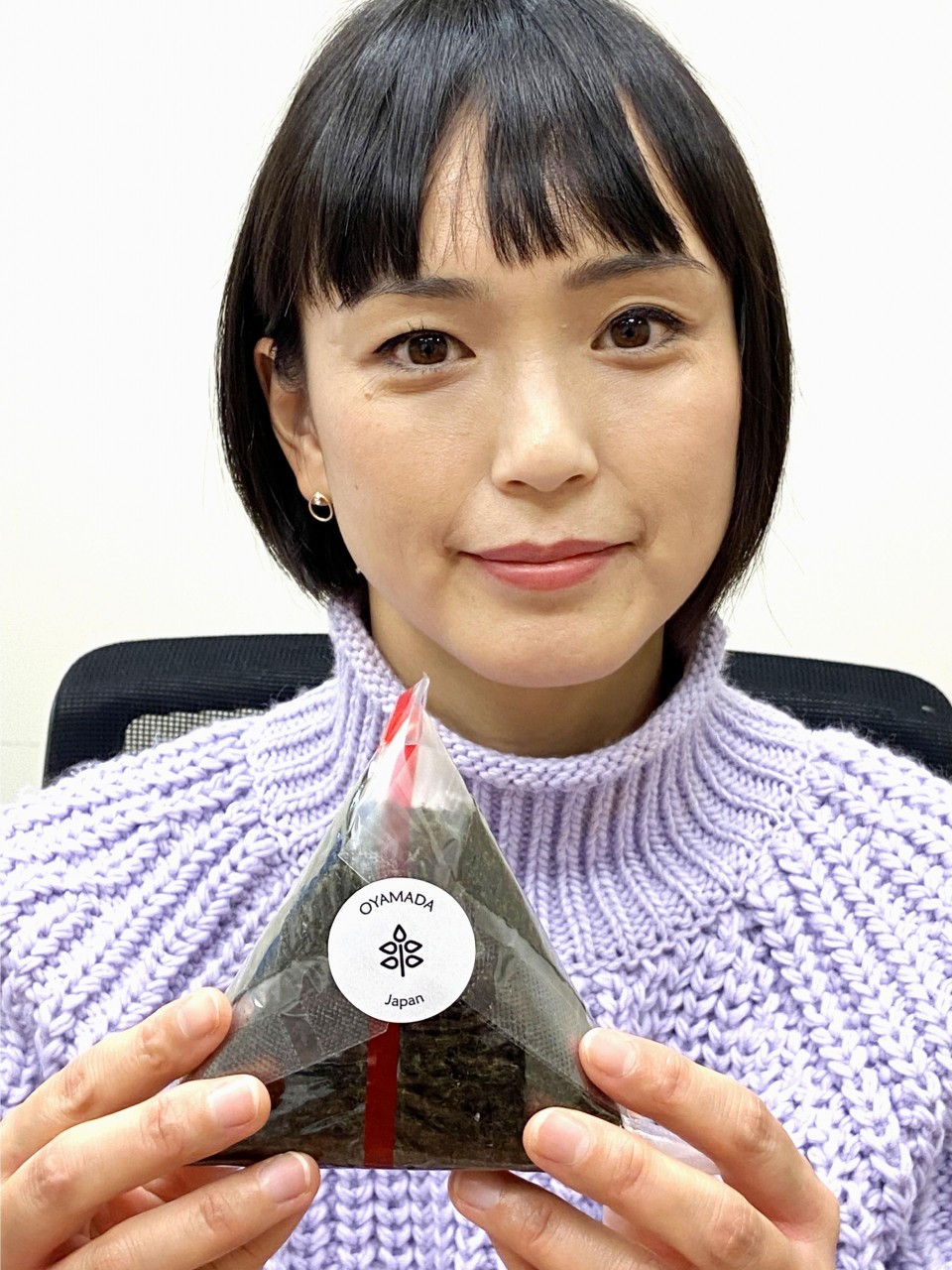 Japanese actress Sayuri Oyamada holds up one of her homemade rice balls in this photo taken on Dec. 23, 2021, in New York City. (Kyodo)

"In developing rice-ball recipes, I thought the best approach would be to combine traditional Japanese ingredients with ones already popular among Americans," she said. "I came up with things like 'nori no tsukudani' (simmered, flavored seaweed) with cream cheese, and red basil with avocado."

By the expected end of the collaboration, Oyamada's creations had started to garner a following with increased demand.

"It grew beyond something I could just do in my spare time," she said.

Putting her return to acting on hold although the film industry was resuming, Oyamada started a company in the fall of 2020 and set up a commercial kitchen with part-time workers -- trying to learn the ABCs of the business as she went along.

As a small-scale operation, the business makes all its products by hand and delivers them directly to local markets. The lineup of flavors includes innovations like vegan curry and vegan hot dogs and more traditional varieties such as tuna mayo, sour plum, and salmon with yuzu.

"(Oyamada's) onigiri remind me of homemade ones rather than store-bought," said Suzumi Abe, a New York City-based food blogger originally from Japan.

Abe, who has built an Instagram presence for This Plate NYC over the past six years with an eye on Japanese food businesses, said that Oyamada's is the first enterprise she has found showcasing home-style rice balls in the city.

"It's very important to share authentic food culture to the U.S. market," she added, noting that vegan options and the portable nature of the item "fits well with New Yorkers."

Oyamada, a native of Niigata Prefecture, first came to New York in 2010 on a government-run art exchange program that lasted about a year. She has been based in the city since returning on an artist visa in 2012, and before the pandemic had kept busy with acting work as her main focus, including playing a starring role in Wayne Wang's 2016 film "While the Women Are Sleeping."

Building and managing a food business has been a completely new experience.

"It's been a matter of figuring it out as I go along," Oyamada said. "I went around to potential buyers with samples and developed a sales network, but many of those contracts were suddenly dropped."

"That really showed me how difficult it is to do business in New York."

Additional concerns have come in the form of supply-chain bottlenecks and inflation. Oyamada's orders of red basil have been delayed up to three months, and her refusal to compromise on rice quality -- as a native of Niigata known for its specialty rice -- threatens her bottom line as the cost of premium rice increases.

Her clients have also sounded her out on the possibility of new products such as Japanese lunch boxes, but Oyamada is uncertain about taking on the risk of expanding her operations at such an unpredictable time.

"Since the coronavirus pandemic started, it's hard to plan for even the next few months, let alone a year in advance," she said.

While in-person gatherings remain feasible, Oyamada took the opportunity to attend the Japanese Artist Pop-Up Shop holiday market in December. She was one of 22 vendors selling various Japanese or Japan-inspired goods at the venue in Manhattan's Lower East Side.

Although organizers said it was only the second time for the pop-up event to include food sales in addition to items like accessories, clothing, and artwork, Oyamada's onigiri were quick to sell out.

"I never imagined myself selling rice balls in New York, but this is also a way to spread Japanese culture abroad as I've sought to do with my acting," said Oyamada, whose film career has included projects in China and Haiti as well as the United States.

While aiming to return to acting when the time is right, she plans to continue developing new rice ball flavors and collaborating with local companies, seeking opportunities amid the health crisis.

"For the time being, I am completely devoted to putting this business on track to succeed," she said.