Attempting to secure his third straight championship since getting promoted to the ancient sport's highest rank, Terunofuji was at his commanding best in brushing aside No. 1 maegashira Kiribayama (0-3) at Ryogoku Kokugikan. 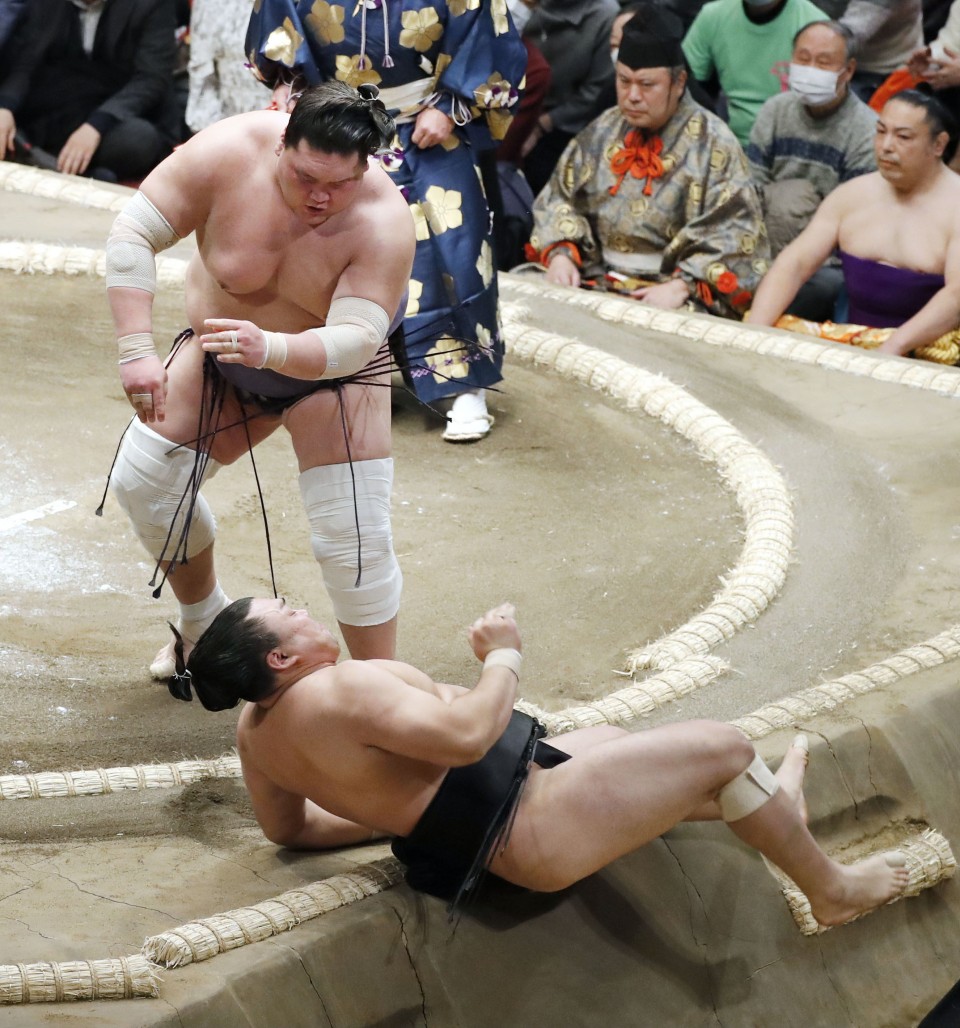 Terunofuji easily seized a left overarm belt hold off the initial charge and instantly forced his counterpart to the edge before showing no mercy in swiveling him off the raised ring.

Ozeki Shodai (2-1) had a day to forget as he was thrust out by previously winless komusubi Daieisho (1-2) in a surprisingly one-sided bout.

Despite starting the meet with two wins, a hapless Shodai had no tools to counter trademark shoves from the winner of last year's New Year tournament and found himself over the straw bales in a matter of seconds.

The two stocky wrestlers served up an entertaining bout in their initial encounter, Ura scurrying around and grabbing the front side of the ozeki's belt with his both hands only to hit the ground at the same moment in trying to claim a crush-out win near the edge.

Ura opted for a quick jump away at the start of the replay, leaving Takakeisho teetering before claiming an emphatic push-down win.

Sekiwake Mitakeumi won his third straight after managing to keep up with the nimble footwork of No. 1 Wakatakakage (0-3), never letting go the right underarm belt hold he had from the start to force out the maegashira.

After rivaling Terunofuji for the title during the November meet in Fukuoka, No. 6 Abi continued his perfect start here as he powerfully slapped down Tobizaru with his right hand to condemn the No. 8 rank-and-filer to his first defeat of the meet.

New elite makuuchi division entrant Oho, the grandson of 32-time Emperor's Cup winning-yokozuna Taiho, also made it three out of three as the No. 18 showed good patience in pushing out No. 16 Tsurugisho (0-3).

No. 5 Onosho and No. 10 Myogiryu won their bouts to join the six-man leading pack with 3-0 results so far.

Sekiwake Takanosho (2-1) was on the back foot but had pulled off a timely thrust down at the edge of the raised ring to floor No. 3 Tamawashi, who suffered his first loss of the tournament.

After downing Takakeisho a day earlier, komusubi Meisei made it 2-1 for the meet by overcoming a dogged resistance from No. 2 Ichinojo in a labored, force-out win.