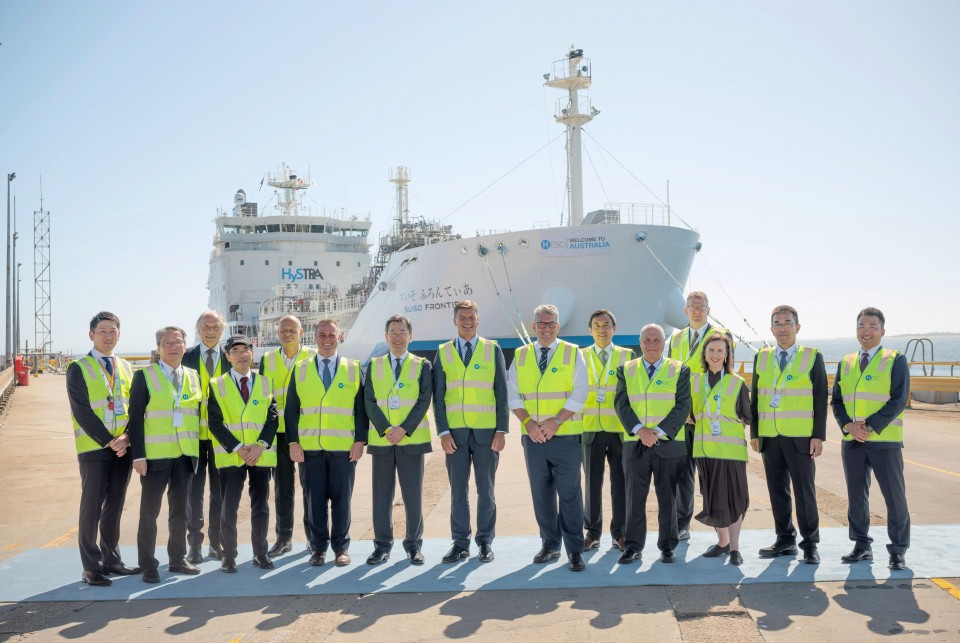 The Suiso Frontier liquid hydrogen carrier is docked at the Port of Hastings southeast of Melbourne on Jan. 21, 2022. (Photo courtesy of Kawasaki Heavy Industries Ltd.)(Kyodo)

It will transport hydrogen to Japan as part of a project between the two countries and undertaken by a consortium of companies from Australia and Japan including Australian company AGL Energy Ltd., Kawasaki Heavy Industries and Japanese company Iwatani Corp.

Australian Prime Minister Scott Morrison said the shipment of liquid hydrogen, which is a part of the project called Hydrogen Energy Supply Chain, is the start of a major new energy export industry for Australia.

"The HESC project puts Australia at the forefront of the global energy transition to lower emissions through clean hydrogen, which is a fuel of the future," Morrison said in a statement, adding the project is key to the two countries' hydrogen industries.

The project involves brown coal from the Latrobe Valley in the southeastern state of Victoria being steamed under high heat to create hydrogen.

The gas is transported some 160 kilometers west to the Port of Hastings where it is cooled to minus 253 C and turned into a liquid, reducing its volume to one-800th of the original gas, ready to be transported to Japan.

It is hoped the hydrogen, which produces only water as an emission when used as fuel, can be used for electric fuel cell vehicles and as an alternative to natural gas, among other uses.

Angus Taylor, the Australian minister for industry, energy and emissions reduction, also commended the arrival of the carrier and said the project would help Australia and Japan reach their goals of zero emissions by 2050.

Later this week, the Suiso Frontier will leave the port and arrive at Kobe in mid-February or later.

To support the project's precommercialization phase, the Australian government said it will provide AU$7.5 million ($5.4 million). Once full commercial production is realized, the project will produce 225,000 tons of hydrogen, which will help reduce global CO2 emissions by some 1.8 million tons per year, the government said.