The Reciprocal Access Agreement will facilitate faster deployment of Japanese Self-Defense Forces and Australian Defense Force personnel and ease restrictions on the transportation of weapons and supplies for joint training and disaster relief operations.

"This is a landmark agreement that will bring Japan-Australia security cooperation to a new level," said Kishida in signing the agreement. 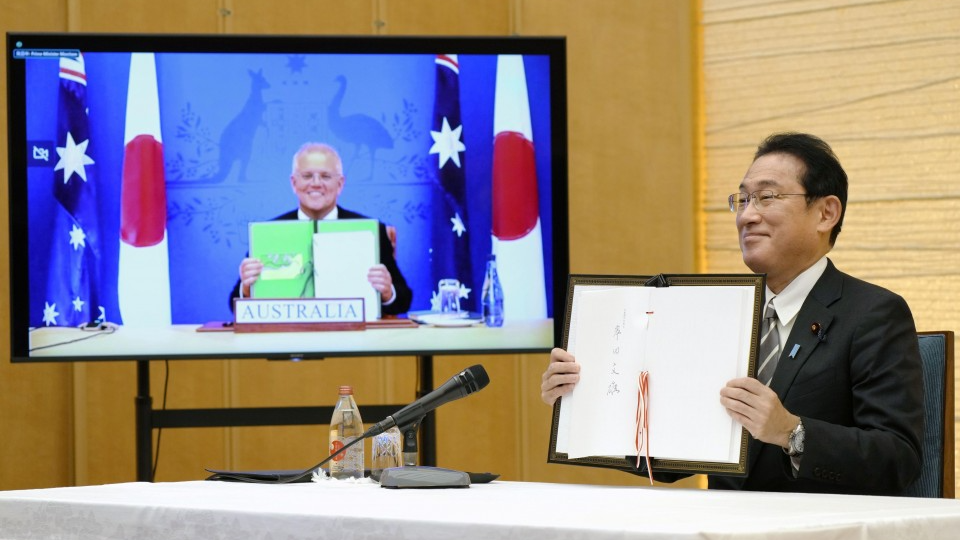 Japanese Prime Minister Fumio Kishida (R) is pictured at his office in Tokyo during a virtual meeting with Australian Prime Minister Scott Morrison (on screen) on Jan. 6, 2022, during which they signed a treaty to facilitate joint exercises. (Kyodo)

"It will underpin greater and more complex engagement, interoperability and cooperation between the Australian Defense Force and the Japanese Self-Defense Forces," he added.

The joint statement, released after their virtual meeting that stretched over more than 100 minutes, said the signing of the agreement underscored their "commitment to further elevating bilateral security and defense cooperation in the interests of peace and stability in the Indo-Pacific region."

The same statement said Kishida and Morrison voiced "serious concerns" about the situations in the South and East China seas, where China has been involved in territorial rows with its neighbors, in a veiled criticism of Beijing's maritime activities aimed at altering the regional status quo in its favor.

As the meeting came a day after Pyongyang fired what it claims was a newly developed hypersonic missile, the two leaders also "condemned North Korea's ongoing development of nuclear weapons and ballistic missiles" in the statement.

The latest signing of the pact made Australia the second country with which Japan has concluded such a defense cooperation accord after the United States. The statement said the two sides confirmed their intent to complete respective domestic procedures necessary to implement the RAA as early as possible.

Japan will also seek to reach such a pact with Britain, with which Japan launched negotiations in October, and France as the two countries have been increasing defense cooperation with Tokyo in response to an increasingly assertive China.

Japan and Australia agreed to start talks on the RAA in 2014 and reached a broad agreement in November 2020, but Japan's death penalty system had been an obstacle in concluding the deal.

Australia, which has scrapped capital punishment and called for its abolition worldwide, initially asked for its military personnel to be exempted from the death penalty for crimes committed in Japan.

However, the two sides struck the deal as Australia increasingly sees Beijing as a security threat.

The two countries will also launch a joint committee to discuss the details of how to implement the agreement, such as extradition of those involved in crimes.

China has ratcheted up economic pressure on Australia after Canberra pushed Beijing to investigate the origin of the novel coronavirus, which was first detected in Wuhan, central China.

Japan and Australia are part of the Quad framework also involving the United States and India, and Kishida voiced eagerness to strengthen ties with the fellow democracies in his New Year press conference on Tuesday.

Kishida had been considering a visit to Australia in January to sign the agreement but abandoned the plan to focus on the COVID-19 response in Japan.