A group of scientists and scholars on Thursday left the "Doomsday Clock" at a position 100 seconds from midnight, saying the world is "no safer than it was last year" from threats of nuclear war and climate change.

"This decision does not, by any means, suggest that the international security situation has stabilized," said the experts who advised the Bulletin of the Atomic Scientists journal in setting the hands of the symbolic clock located at the University of Chicago. 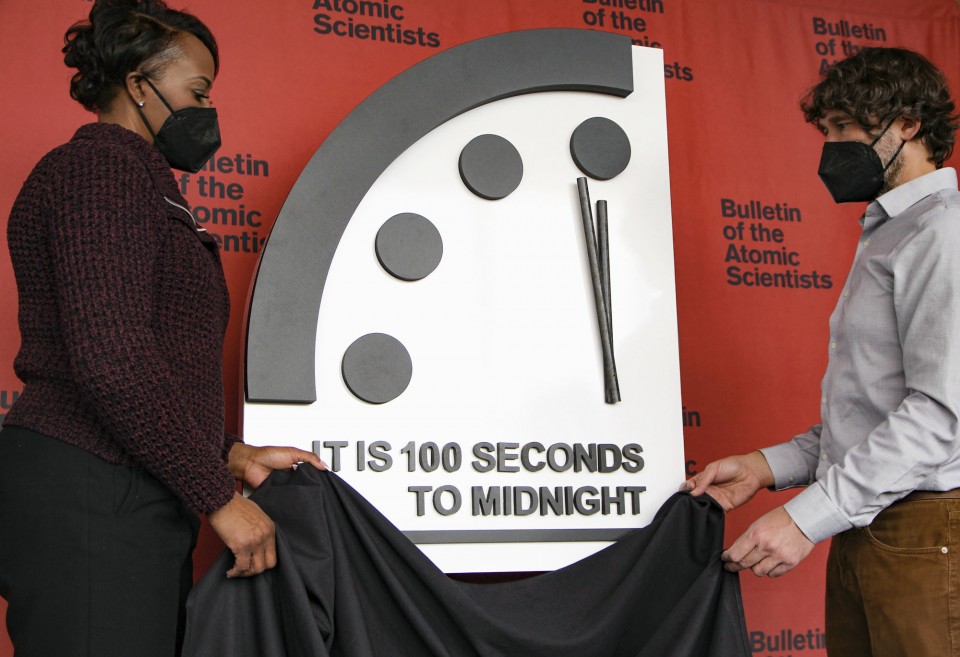 Photo taken Jan. 20, 2022 shows the "Doomsday Clock," set to a position 100 seconds from midnight. (Photo courtesy of the Bulletin of the Atomic Scientists)(Kyodo)

"On the contrary, the Clock remains the closest it has ever been to civilization-ending apocalypse because the world remains stuck in an extremely dangerous moment," they added in a statement.

The Doomsday Clock is a warning about how close humans may be to destroying the world with dangerous technologies, with midnight representing global catastrophe such as nuclear war or irreversible climate crisis.

The experts said some positive developments have been seen in the U.S. approach to dealing with global concerns following the exit of Donald Trump, who was known for his unpredictable, go-it-alone leadership style and provocative rhetoric during his presidency.

The Biden administration is also working to return to the 2015 Iran nuclear deal and rejoined the Paris climate deal, both of which the United States had left under Trump.

"A more moderate and predictable approach to leadership and the control of one of the two largest nuclear arsenals of the world marked a welcome change from the previous four years," the experts said.

But they warned that U.S. relations with Russia and China remain tense, with all three countries "engaged in an array of nuclear modernization and expansion efforts," including the push to develop hypersonic missiles.

"If not restrained, these efforts could mark the start of a dangerous new nuclear arms race," the scholars said, while noting that North Korea's nuclear and missile ambitions and potential unsuccessful attempts to revive the Iran nuclear deal contribute to growing dangers.

The Bulletin of the Atomic Scientists was founded in 1945 by Albert Einstein and University of Chicago scientists who helped develop the first atomic bomb in the Manhattan Project. The clock was created in 1947.