Changing the blades he attaches to his figure skating boots made all the difference for Japan's Shoma Uno, who is aiming to go one better than his Pyeongchang silver medal at the upcoming Beijing Winter Olympics.

Since he started using the made-in-Japan "Kozuka Blades" in recent years, the 24-year-old has seen a significant improvement in performance which has given him the extra boost of confidence he needed to include five quadruple jumps in his free skate this season. 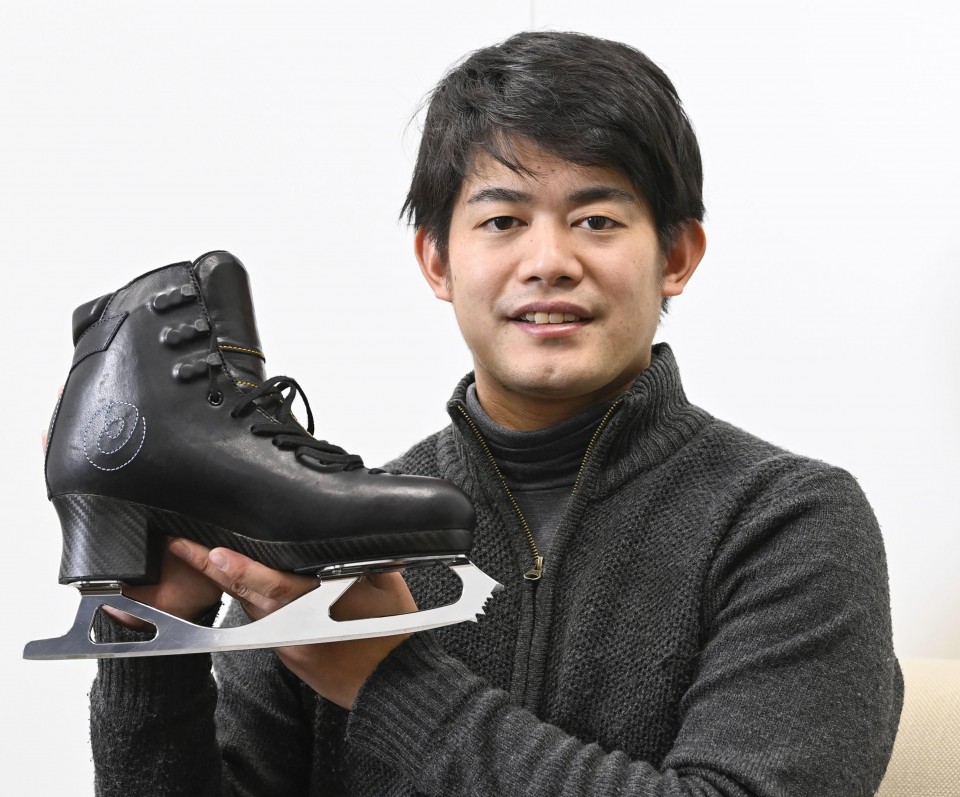 Former Olympic figure skater Takahiko Kozuka holds up a skating shoe with a blade named after him in an interview in Tokyo on Nov. 29, 2021. (Kyodo)

Like most sporting equipment, figure skates are designed to cater to a range of skill levels, with a skater who attempts triple and quad jumps needing something very different to a recreational skater. Elite-level skaters know an investment in quality boots and blades pays big dividends under the bright lights.

"Your blade edges are the only point of contact you have with the ice, so choosing the right shoes is important," 2010 Olympic figure skater Takahiko Kozuka said in a recent interview with Kyodo News.

Nagoya-based steel manufacturer Yamaichi Special Steel Co. and Nagoya native Kozuka teamed up to make the new set of blades that Uno trusts to support him as he stretches to reach new highs. They took six years to develop and went on sale in the spring of 2018. 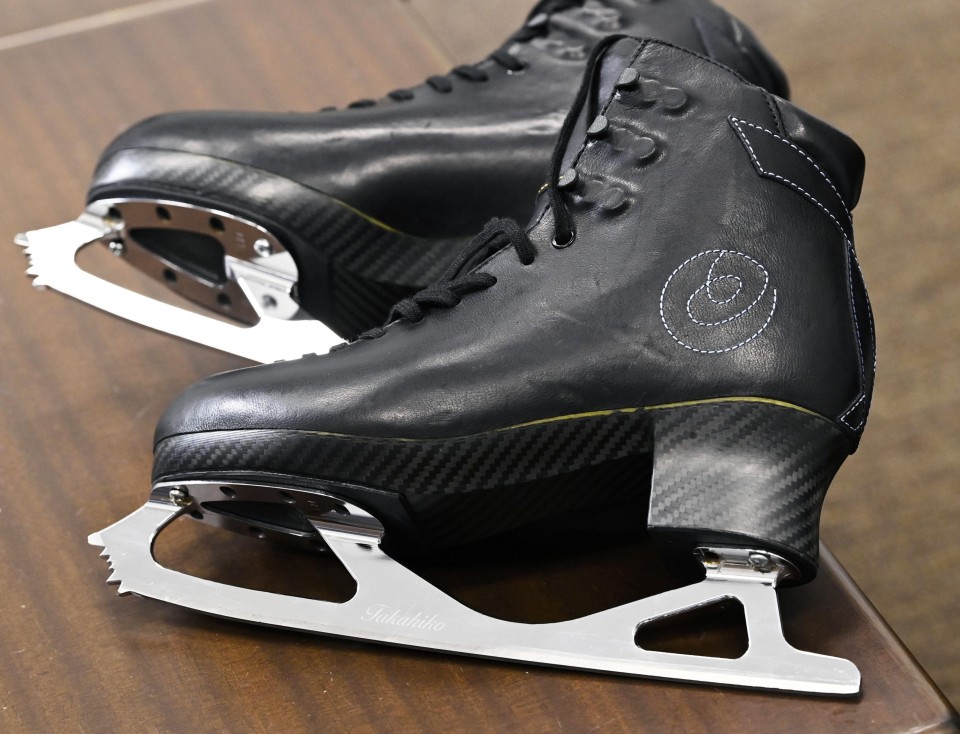 A figure skating season is made up of two halves, the main events in the first half beginning in October and running through the nationals in late December, and the second half continuing from January to March, when the world championships are held.

When he was actively competing, Kozuka struggled to find blades that worked in perfect concert with his boots.

"It takes about two weeks to break in a new pair so the ideal time to change any equipment is after the nationals," Kozuka said.

But in reality, because of the stress quad jumps put on his blades, they lasted less than one month.

There are four main types of blades used in ice sports -- hockey, figure skating, and short- and long-track speed skating.

Figure skating blades are longer and have a wider contact patch than hockey blades, which can help with balance. The toe pick at the front enables skaters to perform jumps and spins.

Before he retired from competitive figure skating in 2016, Kozuka started on the collaborative project with Yamaichi Special Steel.

Unlike conventional skates where the base parts are assembled and welded together, Kozuka Blades are milled from an 11.5-kilogram solid steel block to create a single-piece blade that weighs 271 grams.

They are three times stronger and lighter, and their six-month warranty demonstrates the company's confidence in their relative longevity. 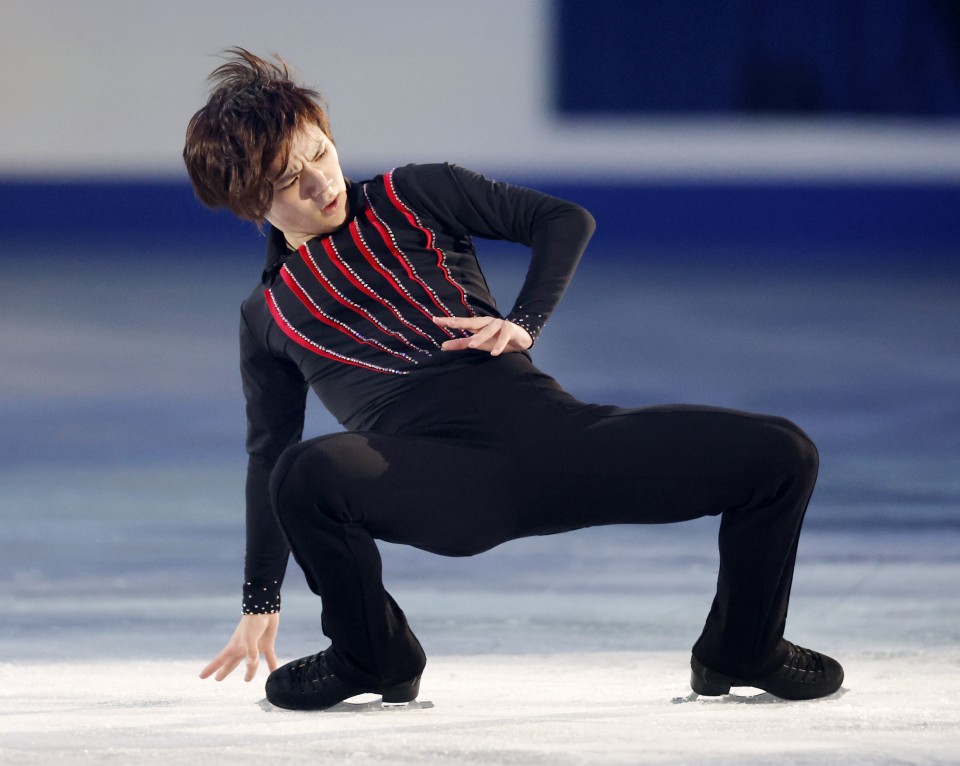 Shoma Uno performs during the exhibition gala at Yoyogi National Gymnasium in Tokyo on Nov. 14, 2021, after the NHK Trophy, the fourth event of the Grand Prix series. (Kyodo)

Uno, who has in the past worn out a set of blades in two weeks, said using Kozuka Blades has allowed for more graceful and athletic movements, and enabled him to focus on his skating instead of worrying about injuries and accidents.

"These blades don't bend or shift so I feel safe. I can focus on fixing my technical problems which should be my priority," Uno said.

Kozuka says these blades can flex like airplane wings and still not break.

Kozuka's constantly evolving journey to better skate-making will not end here, as he says blades are only part of the skate, and he is now designing boots.

"I wanted to make the full set, not just the blades. I think we're on about sample No. 30. Business has been affected by the pandemic but we've raised 5 million yen through crowdfunding. People have high expectations about our products. It's motivating," he said.

"These boots could be a secret weapon for better jumping. They're going to be really good. Fine Japanese craftsmanship has been poured into the creation of these boots."