Japan and the United States on Friday urged world leaders to visit Hiroshima and Nagasaki, the cities destroyed by U.S. atomic bombings in World War II, as they aim to build momentum toward a world free of nuclear weapons.

"Recalling the visit by former President (Barack) Obama to Hiroshima, Japan and the United States call on political leaders, youth, and others to visit Hiroshima and Nagasaki to raise and sustain awareness," the two governments said in a joint statement, referring to the former U.S. president's historic visit in 2016.

The move came after a U.N. conference to review the Treaty on the Non-Proliferation of Nuclear Weapons, scheduled to be held Jan. 4 to 28 in New York, was put off amid the rapid spread of the Omicron variant of the coronavirus. The gathering has been repeatedly postponed from its original date in 2020 due to the pandemic. 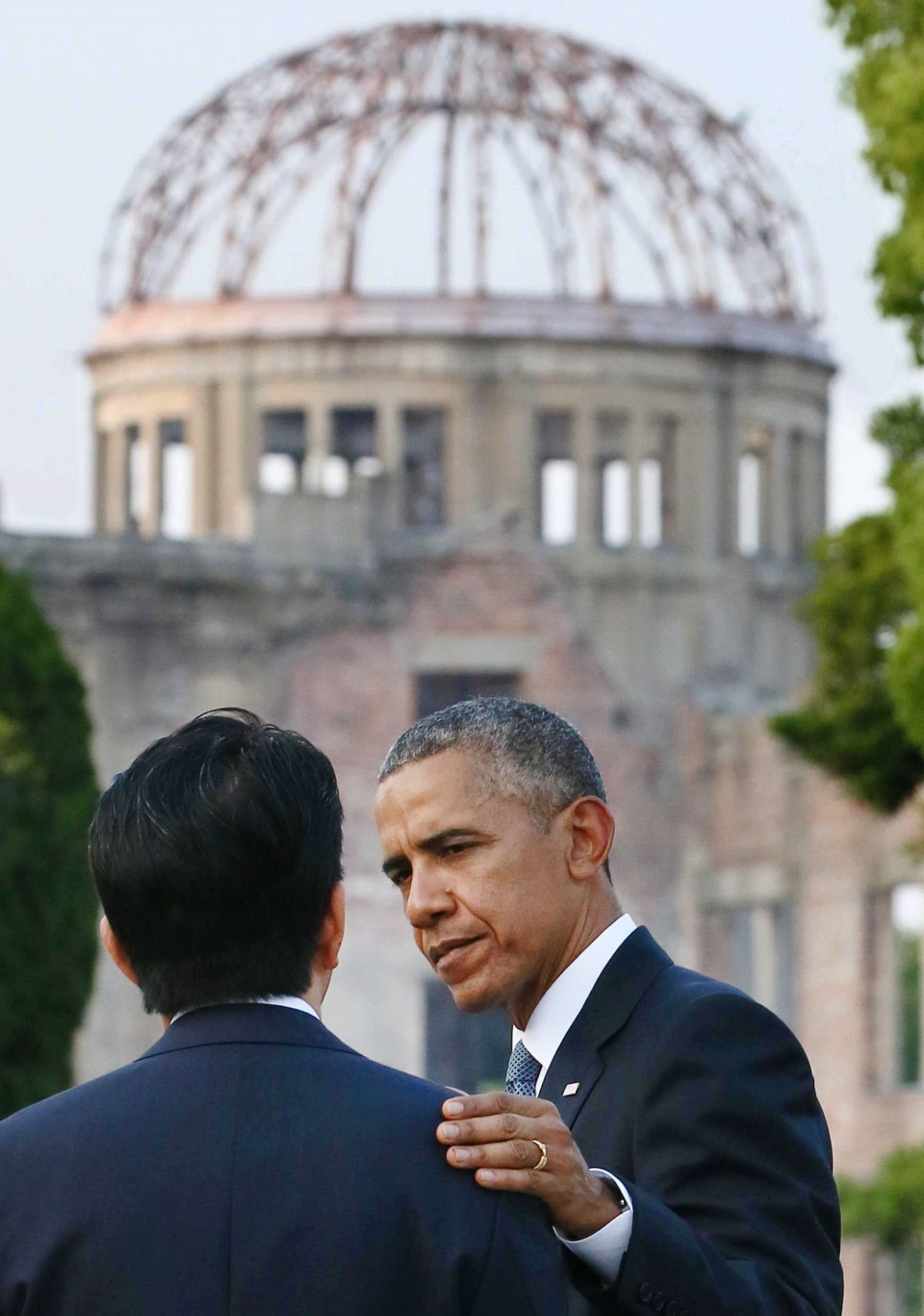 Then U.S. President Barack Obama (R) puts his hand on the shoulder of then Japanese Prime Minister Shinzo Abe at the Peace Memorial Park in Hiroshima on May 27, 2016. The Atomic Bomb Dome can be seen in the background. Obama became the first sitting U.S. president to visit the atomic-bombed city that day. (Kyodo)==Kyodo

A Japanese Foreign Ministry official told reporters that it was regrettable that the NPT talks were called off. "After consulting the U.S. side, we concluded that issuing this kind of statement now is the most effective way to maintain and increase the momentum" toward nuclear disarmament, the official said.

The statement was released ahead of an online meeting to be held later in the day between Japanese Prime Minister Fumio Kishida, who represents a constituency in Hiroshima and was foreign minister when Obama visited, and U.S. President Joe Biden. It will be the first summit of the two leaders since Kishida took office in October.

In April 2015, Tokyo and Washington issued a joint statement when the previous NPT review conference was taking place, but they did not make such a request for leaders to visit the western and southwestern Japan cities, where the world's first and second atomic bombs were dropped on Aug. 6 and 9, 1945.

The atomic bombings of Hiroshima and Nagasaki "serve as stark reminders that the 76-year record of non-use of nuclear weapons must be maintained," the statement said, recognizing the NPT as "indispensable for preventing the proliferation of nuclear weapons and achieving their total elimination."

Japan also welcomed a joint statement issued earlier this month by the United States, Russia, China, Britain and France -- the five recognized nuclear powers -- which affirmed that a nuclear war must be avoided, and that such weapons should be limited to defensive purposes and to deter aggression.

The United States said it "was pleased to co-sponsor" a resolution with Japan adopted by the U.N. General Assembly last month.

The resolution, calling for the total elimination of nuclear weapons, was backed by the United States, Britain and France, while Russia and China opposed it.

In the statement, Japan and the United States noted China's "ongoing increase in its nuclear capabilities" and urged Beijing to "contribute to arrangements that reduce nuclear risks, increase transparency, and advance nuclear disarmament."

Japan and the United States also said they are "strongly committed to the complete, verifiable, and irreversible dismantlement" of North Korea's nuclear weapons and ballistic missiles in line with U.N. Security Council resolutions.

The two nations urged Iran to "fully and immediately cooperate" with the International Atomic Energy Agency, the U.N. nuclear watchdog tasked with verifying Tehran's commitments under its 2015 nuclear deal with world powers.