North Korea had earlier criticized the United States for expanding sanctions on its nationals following the recent launches of what Pyongyang claimed were hypersonic missiles, threatening a "stronger and certain reaction."

Japanese Defense Minister Nobuo Kishi said North Korea fired at least one ballistic missile that is assessed to have landed in waters near the country's eastern coast and outside Japan's exclusive economic zone in the Sea of Japan. 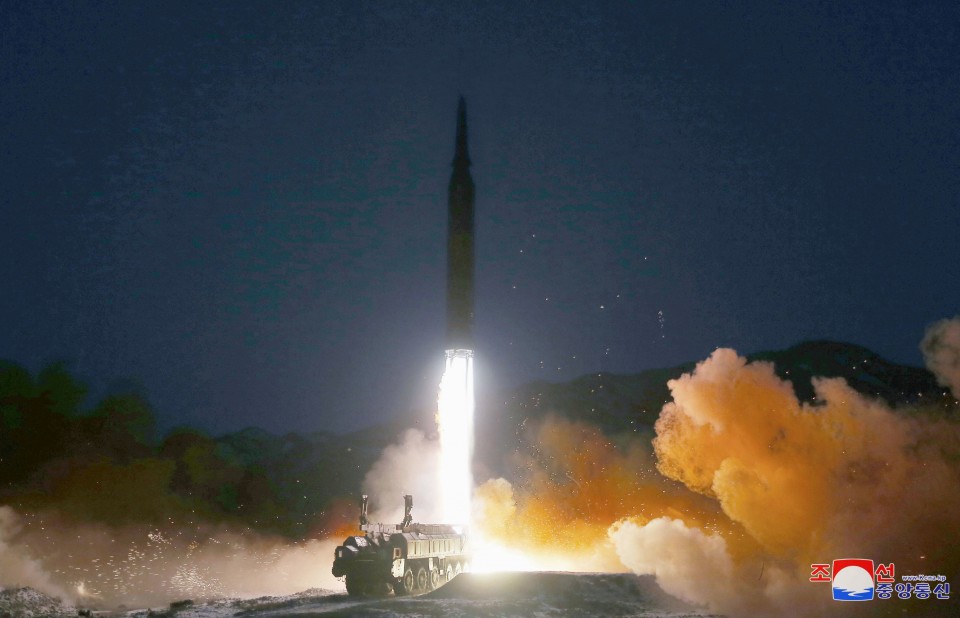 Photo shows the test-firing of a hypersonic missile conducted by North Korea's Academy of Defense Science on Jan. 11, 2022. (KCNA/Kyodo)

The United States also condemned the latest launch as a violation of multiple U.N. Security Council resolutions and said it "poses a threat" to North Korea's neighbors and the international community.

While emphasizing that the U.S. defense commitment to Japan and South Korea remains "ironclad," a State Department spokesperson said Washington will continue to call on Pyongyang to engage in dialogue over its nuclear and missile programs.

The South Korean military's Joint Chiefs of Staff said the missiles were fired from an inland area of North Pyongan Province in the North's northwest and traveled about 430 kilometers while reaching an altitude of about 36 km at one point.

The Japanese government estimated the missile flew about 400 km and reached a maximum altitude of around 50 km.

"It is obvious that the purpose of North Korea's frequent firing of missiles is to improve its missile technology," Kishi told reporters in Tokyo.

"We will consider all options, including the possession of so-called enemy base strike capabilities, and will continue to work to drastically strengthen our defense ability," he said.

Chief Cabinet Secretary Hirokazu Matsuno said the latest launch, along with repeated firings of ballistic missiles by the North, poses a "serious problem" to the international community.

The top Japanese government spokesman said there were no immediate reports of damage caused by Friday's launch.

South Korean media, quoting the country's military, reported the missiles flew as fast as six times the speed of sound and were likely not hypersonic missiles.

The office of South Korean President Moon Jae In held an emergency meeting of the National Security Council and called the series of launches by the North "regrettable."

The latest launch follows ones on Tuesday and on Jan. 5 that North Korea said were newly developed hypersonic missiles.

After the earlier launches, the U.S. State and Treasury departments announced sanctions on seven individuals, mostly North Koreans based in Russia and China, over their alleged ties to Pyongyang's weapons programs.

On Friday morning, North Korea issued a statement saying beefing up national defense capabilities is the legitimate right of a sovereign state.

"If the U.S. adopts such a confrontational stance, the DPRK will be forced to take stronger and certain reaction to it," a Foreign Ministry spokesperson said in a statement carried by the official Korean Central News Agency.