Undefeated sekiwake Mitakeumi easily forced out No. 4 maegashira Okinoumi on Monday to hold onto the outright lead at the New Year Grand Sumo Tournament.

The two-time grand tournament winner remained one win ahead of lone yokozuna Terunofuji, who overpowered No. 4 Hokutofuji in the final bout on Day 9 at Ryogoku Kokugikan.

Mitakeumi met little resistance as he improved to a perfect 9-0, flying out of the blocks and sliding Okinoumi (2-7) straight over the straw.

Mongolian-born grand champion Terunofuji, winner of the past two tournaments, secured a winning record for the 15-day meet at 8-1 with a textbook victory over former komusubi Hokutofuji (3-6).

The powerfully built yokozuna absorbed his opponent's opening charge and patiently held him at bay with a left-hand inside grip, eventually driving him back and toppling him with an underarm throw.

The struggles continued for ozeki Shodai, who dropped to 4-5 after being outmaneuvered by komusubi Meisei (4-5).

Shodai sent Meisei back toward the straw with a strong opening drive, but could not finish the job. The komusubi managed to circle around, pushing the ozeki toward the outside and crushing him out.

The referee initially signaled a win for Shodai, but the ringside judges quickly reversed the decision after conferring. 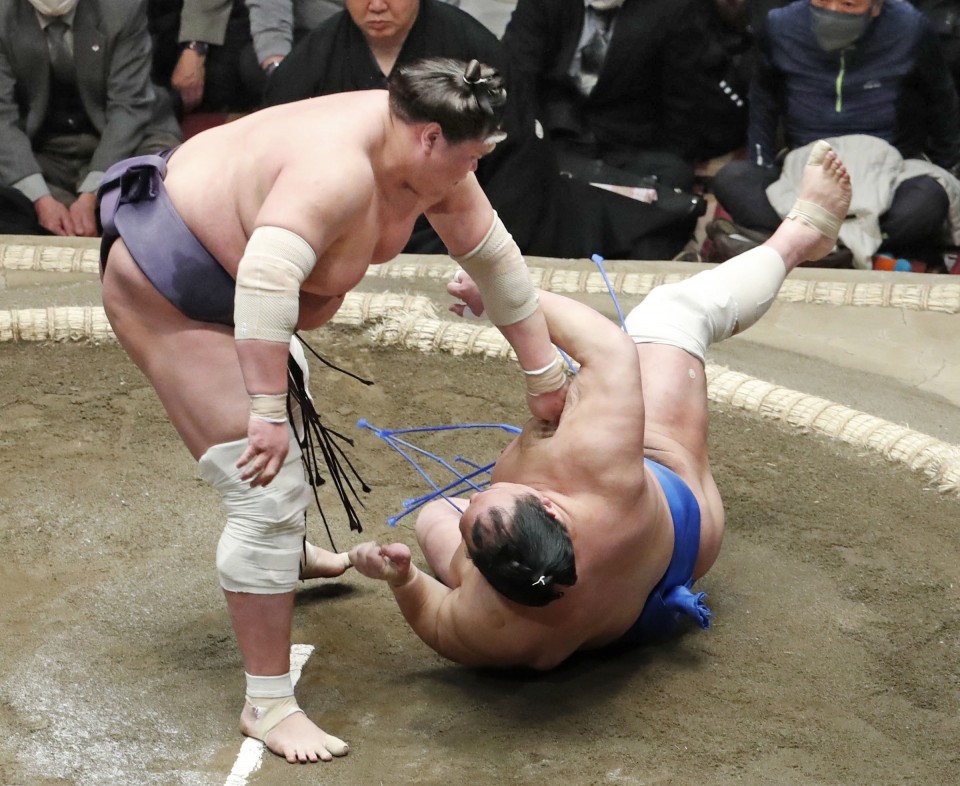 "When the referee pointed to Shodai, I was a bit surprised, because I thought I won," former sekiwake Meisei said. "I went chest to chest with the ozeki and I'm pleased to have beaten him."

No. 6 Abi is one of four rank-and-file wrestlers who are two wins off the pace at 7-2. The former komusubi, who held a share of the lead through Day 6, snapped a two-match losing streak by pulling down No. 10 Myogiryu (4-5).

Sekiwake Takanosho (5-4) pushed his way to a decisive win against No. 5 Onosho (6-3). Takanosho won the opening clash and promptly drove out Onosho, using the pusher-thruster's preferred method of attack against him.

Komusubi Daieisho continued to flounder, dropping to 3-6 after being forced out by No. 1 Kiribayama (3-6).

The winner of last January's New Year meet could not land a solid hit at the opening and gave up an inside grip that put Kiribayama in control of the bout.