Public schools in Japan short of over 2,500 teachers last year

Public schools in Japan were short of more than 2,500 teachers at the start of the school year last April, government data showed Monday, underscoring the challenges of finding substitutes in the education sector.

An education ministry survey of public elementary, junior and senior high schools, as well as special schools for children with disabilities, found that that 2,558 teaching posts were vacant at 1,897 schools, or 5.8 percent of the total schools surveyed.

The shortage stems from a growing number of young people shying away from teaching jobs due to the heavy workload, among other factors, leading many schools to struggle in finding replacements for teachers taking child care or sick leave, the survey showed. 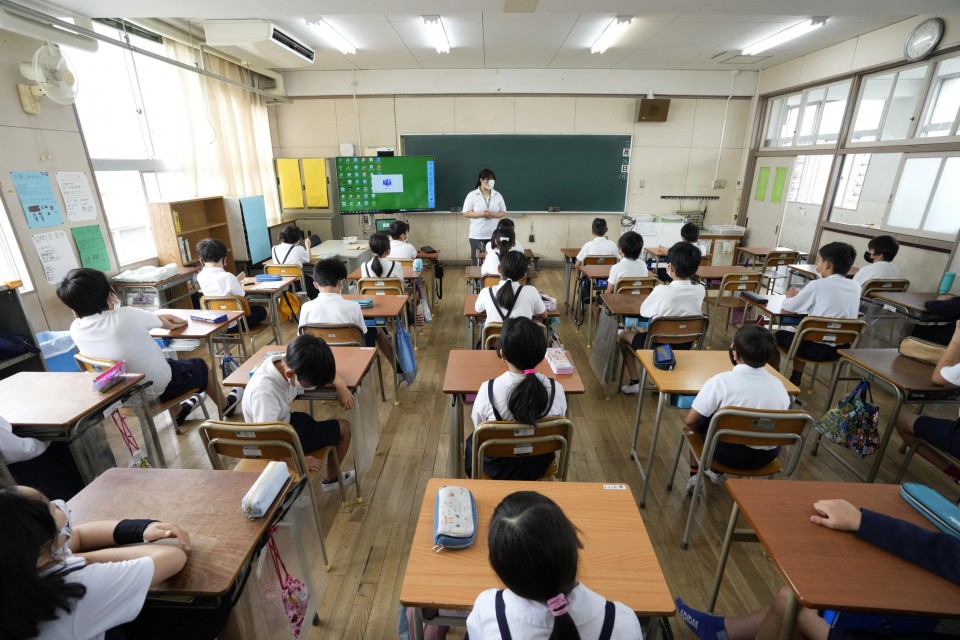 File photo shows a teacher giving a class at an elementary school in Osaka in May 2021. (Kyodo)

It was the first time that the Ministry of Education, Culture, Sports, Science and Technology had conducted a nationwide survey on the shortage.

The shortage and an increase in their duties are wearing out the teachers, according to Aki Sakuma, a professor of education at Keio University.

"The government needs to take drastic measures such as raising their wages as it is getting more and more difficult to attract good talent and thus leads to a decline in the quality of education," said Sakuma.

An official of the ministry said it will take the necessary steps to improve the situation as it is "not desirable to have such a shortage."

Asked about the shortage of teachers, 53 education boards cited that the number of teachers taking maternity or paternity leave was more than expected, while 49 boards said the number of people on sick leave had increased.

The survey, which covered education boards in 68 prefectures and government ordinance-designated cities, asked about the differences between planned and actual staffing as of April last year.

The survey found that 1,218 teachers were lacking at 937 elementary schools, while 649 junior high schools reported a shortage of 868 teachers.

There were vacancies for 217 teachers at 169 high schools while special schools were short of 255.

The shortage also resulted in principals, vice principals and other personnel doubling as homeroom teachers at some elementary schools. Some junior and senior high schools did not have any teachers in subjects such as math and science, the survey showed.

As of May last year, the percentage of public schools nationwide suffering a shortage of teachers did slightly improve, with a shortage of 2,065 teachers reported by 1,591 schools.