U.S. President Joe Biden said Wednesday that Russia could make a military move into Ukraine as it amasses troops on their border, while warning of the severe financial, economic and other sanctions Moscow would face if it mounts a full-scale invasion.

"My guess is he (Russian President Vladimir Putin) will move in," Biden said at a press conference to mark the end of his first year in office, where he sought to tout his achievements despite the difficulties he is facing in moving ahead with some key legislative and domestic priorities.

Tensions have grown over Ukraine since Russia began a massive military buildup on the border, raising concern among the United States and the North Atlantic Treaty Organization about another incursion following the 2014 annexation of Crimea. 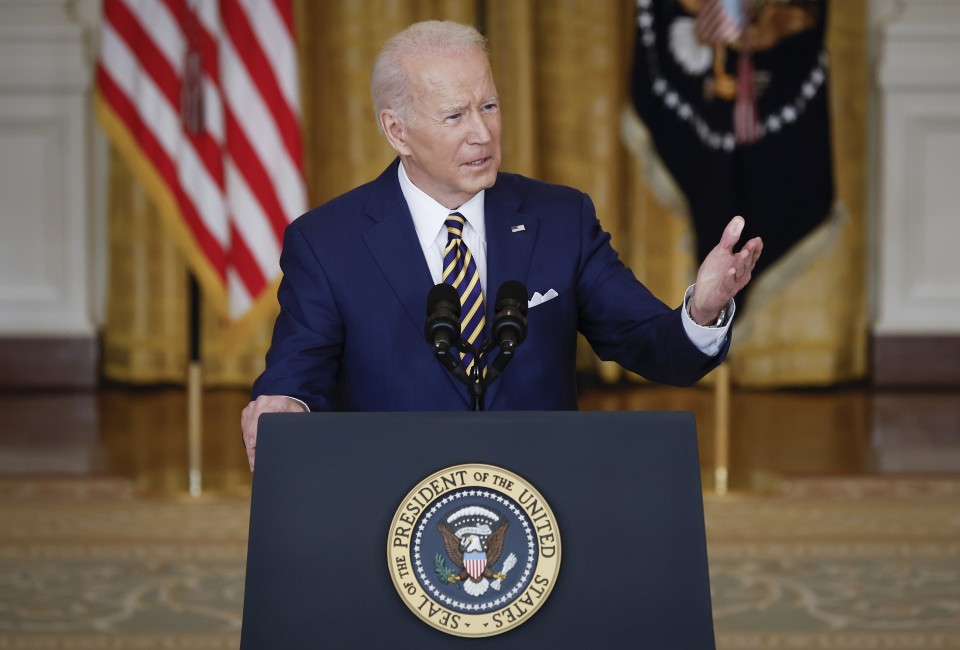 U.S. President Joe Biden answers questions during a news conference in the East Room of the White House on Jan. 19, 2022 in Washington. (Getty/Kyodo)

Russia has denied it intends to invade, blaming the heightened tensions on Ukrainian provocations and NATO's increasing military activities near its borders. The U.S. government says Russia has deployed nearly 100,000 troops on the border with Ukraine and could double the number in relatively short order.

Biden said, "If they actually do what they're capable of doing with the forces amassed on the border, it is going to be a disaster for Russia if they further invade Ukraine."

"Our allies and partners are ready to impose severe cost and significant harm on Russia and the Russian economy," he said, adding that the economic consequences could include limiting Russian access to U.S. dollars.

Biden at the same time said he believes Putin does not want "any full-blown war." He also suggested that a move short of a significant invasion may be less costly to Moscow.

"Russia will be held accountable if it invades, and it depends on what it does," Biden said during his nearly two-hour press conference, touching on the possibility of a "minor incursion."

The remarks apparently led the White House to issue a statement emphasizing that "any" move by Russian military forces across the Ukrainian border would constitute "a renewed invasion" and would be met with a "swift, severe, and united response from the United States and our allies."

The White House also said aggression short of military action, such as cyberattacks and paramilitary tactics, would be met with a "reciprocal" response.

Turning to China, Biden said it is not time to lift the punitive tariffs imposed on Beijing by the previous administration led by Donald Trump.

Noting that U.S. Trade Representative Katherine Tai is working on the issue, the president said he is "uncertain" about the possible easing of the tariffs as the United States is seeking to ensure that Beijing upholds a bilateral trade deal signed in 2020.

Under the so-called phase one deal, China agreed to increase its purchases of U.S. goods and services by at least $200 billion in 2020 and 2021, in a move that is expected to help reduce the chronic U.S. trade deficit.

But China is likely to have fallen short of its purchase commitments.

The formal solo press conference on Wednesday was Biden's second at the White House since he took office on Jan. 20 last year. He was also grilled about setbacks in the handling of the coronavirus pandemic and his push to pass a roughly $2 trillion social spending and environment bill, as well as rising inflation.