Japanese Prime Minister Fumio Kishida and U.S. President Joe Biden on Friday agreed to launch a high-level bilateral economic dialogue amid China's growing clout in the region, and to cooperate over security threats posed by North Korea as well as potential Russian invasion into Ukraine.

During their first formal summit meeting, held virtually, Biden signaled to Kishida his intention to travel to Japan in late spring when the Asian country plans to host a meeting of the leaders of the Quad, a U.S. official said, referring to the group of four Indo-Pacific democracies also involving Australia and India. 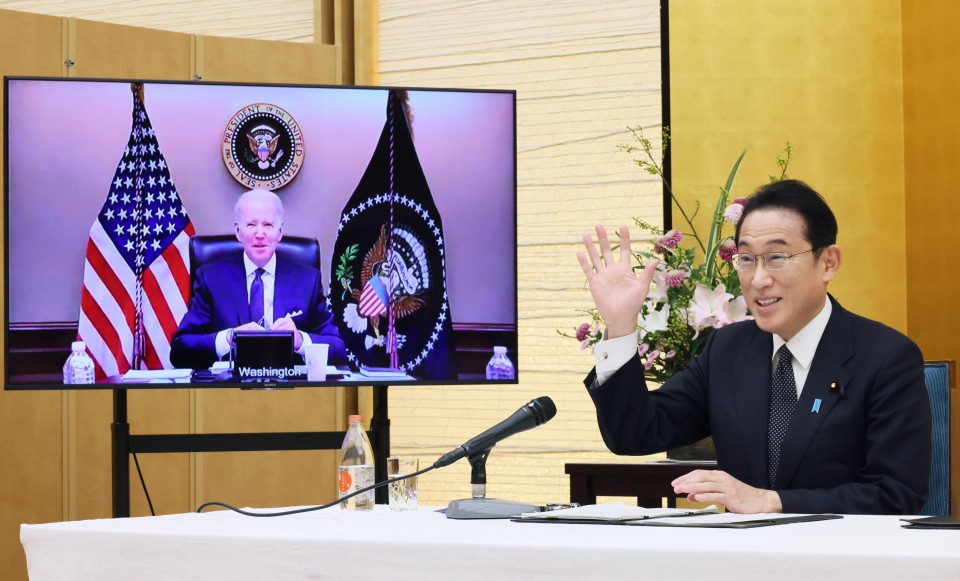 "The two leaders shared the intention to coordinate closely under the strong Japan-U.S. alliance and to deepen cooperation with like-minded countries such as Australia, India, ASEAN, and Europe, toward realizing a 'Free and Open Indo-Pacific,'" the Japanese government said in a press release.

The 80-minute meeting was the latest show of the robustness of the ties between the two allies and reflected their concerns over China's moves to undermine the rules-based international order, as well as its economic coercion and human rights violations.

To step up cooperation for resilient supply chains and technology investments, the two countries will launch ministerial talks on economic policy, with Japan's foreign and industry ministers to be joined by U.S. state and commerce secretaries.

The framework will be called the economic "two-plus-two," akin to the security talks involving the countries' foreign and defense chiefs.

The U.S. official noted that the agenda has "not been fully worked out" but that the expectation is to work "in a number of areas," including export controls. But he said the focus would mostly be on supply chains, technology investments and standard-setting.

Kishida, who took office in October, has placed priority on safeguarding national interests on the economic front, while the Biden administration has been tightening control over surveillance and other technologies that could be used to support the Chinese military or commit human rights violations.

The two leaders, meanwhile, were "resolved to push back" against China's attempts to change the status quo in the East China and South China seas, where Beijing has been pressing its territorial claims, the U.S. government said in a separate press release.

Biden reaffirmed that the U.S. defense commitment extends to the Japan-controlled, China-claimed Senkaku Islands in the East China Sea.

On Taiwan, a self-ruled democratic island facing military and diplomatic pressure from Beijing, Kishida and Biden underscored the importance of "peace and stability" across the Taiwan Strait and encouraged the peaceful resolution of cross-Strait issues.

Following North Korea's recent test-firing of ballistic missiles, the two leaders condemned the actions as violations of U.N. Security Council resolutions and committed to maintaining close coordination, including with South Korea, toward the complete denuclearization of the Korean Peninsula.

Biden expressed support for Tokyo's determination to secure the return of Japanese nationals abducted by Pyongyang in the 1970s and 1980s, an emotional issue for many Japanese.

According to the U.S. official, Kishida indicated that the security environment in Northeast Asia demanded that Japan "step up" and that he was "particularly concerned about the nuclear buildup in China and what that augured for regional security more generally."

Biden welcomed Kishida's determination to "fundamentally" strengthen Japan's defense capabilities to reinforce deterrence against common threats, and especially the country's decision to increase spending on defense, according to the U.S. government's press release.

As a lawmaker elected from Japan's western city of Hiroshima, which suffered U.S. atomic bombing in World War II, Kishida also affirmed with Biden their intention to work together toward a world without nuclear weapons.

With tensions running high over the Russian military buildup along the border of Ukraine, Biden and Kishida also committed to work closely together to deter Russian aggression against Ukraine.

The U.S. official said he believes Washington and Tokyo are "in very close alignment on the challenges that Russia is presenting to Ukraine" and that the Japanese leader made it clear his country will be "fully behind" the United States on the issue.

But when asked whether Japan will join the United States in imposing sanctions on Moscow should an invasion occur, the official only said, "We did not get into the specifics about possible steps that would be taken in the event that we see these (potential Russian) actions transpire."

The Biden administration has seen Japan as a key partner in its efforts to counter China's rise, and Kishida's predecessor Yoshihide Suga became the first foreign leader invited to the White House for talks with Biden, who took office in January last year.

Kishida had hoped to travel to the United States for his first official summit meeting with Biden, but Tokyo's request for an early in-person meeting did not get through, with a Japanese source saying the coronavirus pandemic has kept the U.S. administration busy.

Surging COVID-19 cases at home also forced Kishida to give up on the trip before the start of a parliamentary session in Japan earlier this month. He had a brief conversation with Biden on the sidelines of a U.N. climate summit in Glasgow, Scotland, in November.

The planned Quad summit, to take place in the first half of this year, may become a chance for Biden to visit Japan for the first time as president. Biden has not visited Asia since he took office, with regional summits having gone virtual amid the pandemic.

The Quad is expanding its cooperation in areas including COVID-19 vaccinations, emerging technologies and infrastructure investments, in a move that could serve as a counterweight to China. The members agreed last year to hold a summit meeting annually.