Ukrainian Ambassador to Japan Sergiy Korsunsky said Wednesday he wants Japan to get more involved in multinational efforts to ease growing military tensions over the Russian military buildup along its border with his country.

Korsunsky told a press conference at the Foreign Correspondents' Club of Japan in Tokyo that he expects Japan to "join" the Group of Seven industrialized nations' efforts "to resolve the issue to avoid military confrontation and to support Ukrainian democratic development in a peaceful manner." 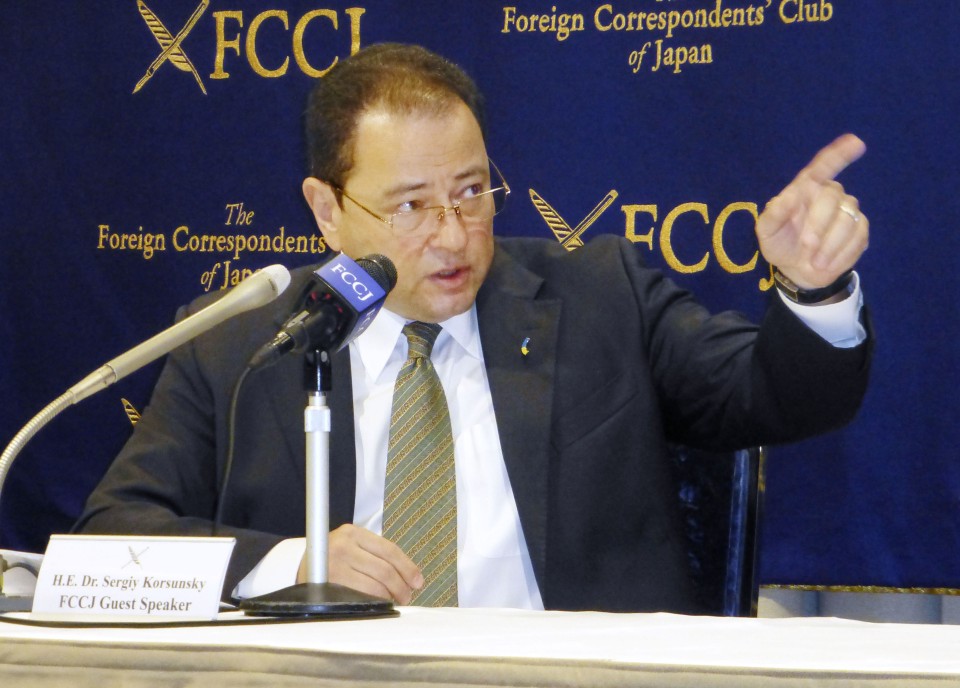 Ukrainian Ambassador to Japan Sergiy Korsunsky holds a press conference at the Foreign Correspondents' Club of Japan in Tokyo on Jan. 26, 2022. (Kyodo)

"We believe that Japan can play a very important role in that Japan is the only G-7 country" in Asia, he added.

The ambassador's remarks came as no progress has been made in talks between political leaders and officials from Western nations and Russia, amid increasing concern over Moscow's possible invasion of Ukraine.

Korsunsky welcomed that U.S. President Joe Biden and Japanese Prime Minister Fumio Kishida discussed the Ukraine situation during their virtual summit last Friday, and underscored that Japan was also the only Asian country that imposed sanctions on Russia following Moscow's annexation of Ukraine's Crimea region in 2014.

Japan "very carefully considers the situations around Ukraine" and is "ready to consider its own measures if another wave of aggression would begin," Korsunsky said.

The envoy also said it is highly unlikely that a "full-scale war" would happen between Russia and Ukraine although there may be "more localized conflicts." He repeatedly said that his nation is "not threatening anybody" and "never going to attack Russia."

Korsunsky said that his nation is fully committed to diplomatic solutions on the issue, but at the same time that Ukrainians are resolved to fight against Russia if needed.

"We are now prepared in territorial defense, we have a majority of the population ready to fight, but we are fully peaceful people, we want a peaceful resolution," he said.