Japan's central and local governments as well as many companies started the year's first day of work Tuesday amid growing fear over the Omicron variant of coronavirus.

The highly transmissible Omicron strain continued to spread in Japan during the year-end and New Year holidays, with 782 new COVID-19 cases reported nationwide on Monday. Tokyo saw its daily count surpass 100 for the first time in about three months the same day.

"I wasn't able to relax completely but had some rest nevertheless," a health ministry official said. "I want to get to work with a renewed feeling." A Tokyo metropolitan government official said, "We are determined to overcome the coronavirus this year." 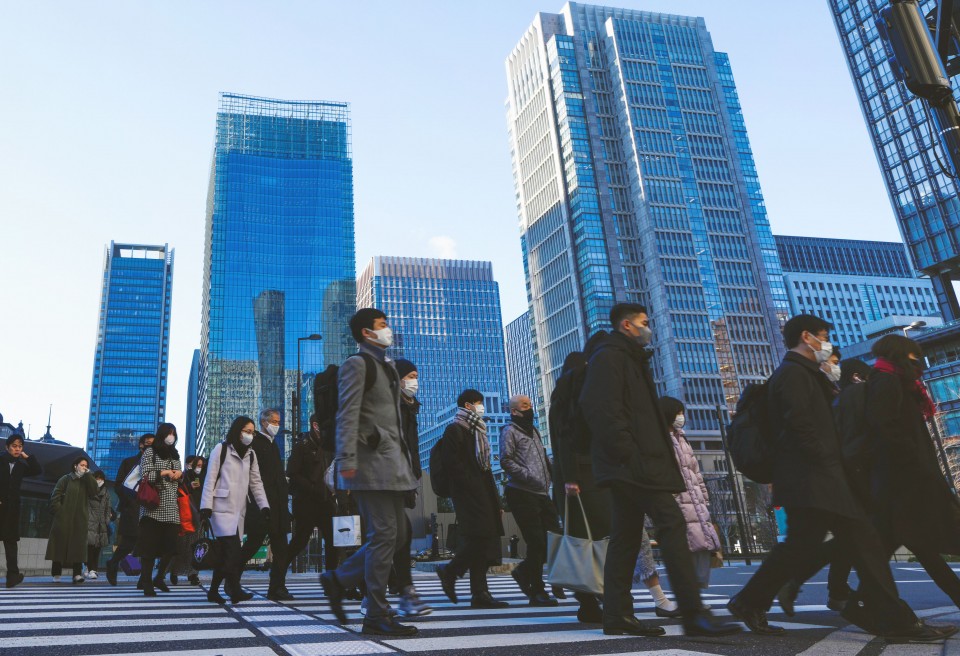 Commuters wearing face masks amid COVID-19 concerns walk in front of JR Tokyo Station on the first work day of the year for government offices and most companies on Jan. 4, 2022. (Kyodo) ==Kyodo

At Tokyo Station, many office workers wearing down jackets hurried to their workplaces in the morning.

"I was concerned about coronavirus so I didn't travel during the holidays," said a 58-year-old office worker who took about 10 days off during the period. "I hope the economy will improve this year."

At the Kanda Shrine in Tokyo, many visitors in suits bought bamboo rakes, which are lucky charms considered to bring success in business.

"My business has been thriving despite the pandemic. I want to try my best to keep it going this year," said 38-year-old Yuichiro Watanabe, who works for a building maintenance company.

Commuters formed a line at a bus stop in front of Osaka Station, a major transportation hub in western Japan.

Akiko Yamashita, 38, said she resumed her 90-minute commute to and from the office as instructed by the company after working from home for some time during the pandemic. "I loved spending time for my new hobbies. I really wanted this new lifestyle to take root," she said.

With just a month to go until the start of the Beijing Winter Olympics, a Japan Sports Agency official said, "We want to support athletes so they can demonstrate their ability to the full extent."

East Japan Railway Co. President Yuji Fukasawa said in his New Year's speech at the firm's Tokyo headquarters, "Customers have come back to some extent during the holiday season. Let's make this year a year of change and challenge."

At the Fukushima Daiichi nuclear power plant crippled by the 2011 quake-tsunami disaster in northeastern Japan, Tomoaki Kobayakawa, president of the operator Tokyo Electric Power Company Holdings Inc., told about 150 employees, "What is most important is fulfilling our responsibility for Fukushima."

"We need to regain our trust in this area in order to achieve both the decommissioning of the plant and the reconstruction of the region," he said.

The Japanese government has decided to begin releasing treated radioactive water from the Fukushima plant into the sea around the spring of 2023 and TEPCO Chairman Yoshimitsu Kobayashi instructed officials online to prepare for dialogue with concerned parties.

The planned water release has caused concern among local fishing communities as well as in neighboring countries China and South Korea.