Japanese and U.S. foreign and defense chiefs on Friday shared their concerns about China's attempts to "undermine the rules-based order" and challenges they pose to the region and world, vowing to cooperate in deterring and responding to "destabilizing activities."

In a joint statement issued after their virtual "two-plus-two" talks, the ministers highlighted the "importance of peace and stability in the Taiwan Strait" while opposing any unilateral actions threatening Japan's administration of the Senkaku Islands in the East China Sea, controlled by Japan but claimed by China. 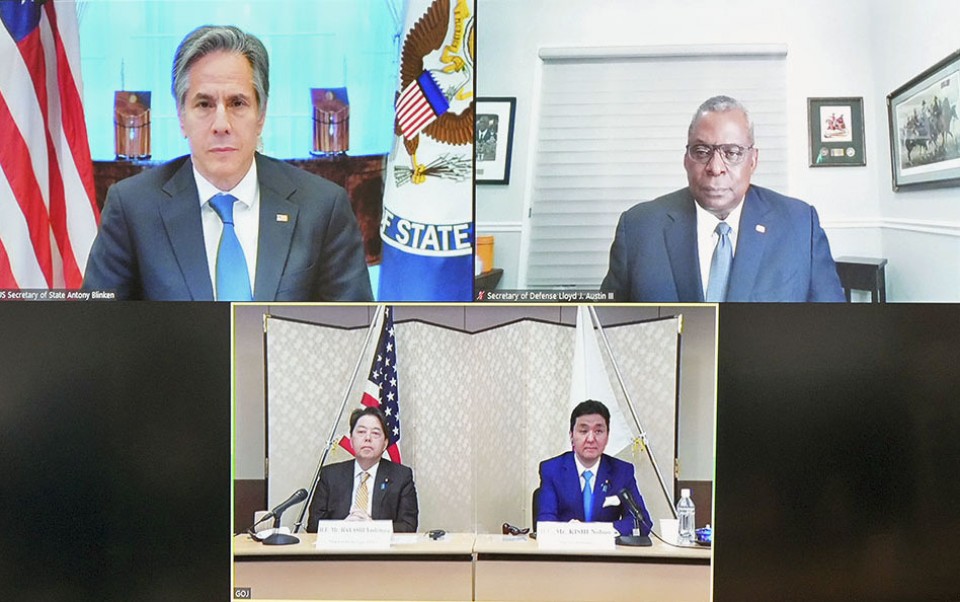 The teleconference came as concerns have been increasing over an escalation of Beijing's maritime assertiveness in the East and South China seas and stepped-up military pressure on Taiwan, as well as the missile and nuclear threats posed by North Korea, which fired what it claims was a newly developed hypersonic missile on Wednesday.

The human rights issues in China have recently drawn attention as major democracies such as the United States and Britain announced a diplomatic boycott of the Beijing Winter Olympics next month, citing what Washington says is China's "genocide" against the Muslim Uyghur minority in Xinjiang.

"We had an important discussion on how to evolve the Japan-U.S. alliance and how to counter present and future challenges effectively," Hayashi told reporters after the security talks, adding he found the joint statement "very ambitious."

In Beijing, China lambasted Japan, the United States and Australia for "grossly" interfering in the country's internal affairs, saying the Asian power has already lodged a solemn protest against the three nations.

As for North Korea, the Japanese and U.S. ministers aired "strong concerns" over Pyongyang's nuclear and missile development, reaffirming their commitment to the complete denuclearization of the Korean Peninsula.

In response to North Korea's latest missile launch, the two countries agreed to carry out "a joint analysis focused on future cooperation in counter-hypersonic technology."

On dealing with security threats, the joint statement said Japan will "examine all options necessary for national defense, including capabilities to counter missile threats."

Despite Japan's war-renouncing Constitution, a controversial plan to acquire so-called enemy base strike capabilities has been domestically debated ahead of a review of the country's long-term guideline, the National Security Strategy, by year-end.

After the meeting, Kishi told a separate news conference that Japan needs to "improve the detection, tracking and interception capabilities against all kinds of aerial threats" and "strengthen its comprehensive missile defense capability."

As for clusters of COVID-19 cases at U.S. military facilities in Japan, Hayashi and Kishi repeated Tokyo's request to impose curfews on U.S. bases in Japan to prevent the further spread of the virus.

Locals have blamed a recent surge in cases among American military personnel in Japan as the cause of a rapid increase in infections in some prefectures amid the spread of the highly transmissible Omicron variant.

The Japan-U.S. two-plus-two meeting, last held in person in Tokyo in March, is the first since Kishida became Japan's leader in October and Hayashi took up his post in November.

Newly appointed U.S. Ambassador to Japan Rahm Emanuel, a former White House chief of staff who was approved as envoy by the Senate last month, also participated in the meeting, according to Blinken.

After the security talks, Hayashi and U.S. interim ambassador to Japan Raymond Greene signed an agreement in Tokyo on host-nation support for U.S. forces stationed in Japan, under which Tokyo will pay 1.05 trillion yen ($9 billion) over five years from April.

The four ministers were initially planning to meet face-to-face in Washington, but the rapid spread of the Omicron variant in the United States forced them to switch to a virtual format, the Japanese officials said.

In addition, Austin was found to have contracted the novel coronavirus on Sunday and has been working from home with mild symptoms.