Myanmar's junta chief Senior Gen. Min Aung Hlaing said he will assure an ASEAN special envoy to Myanmar that he can meet with all parties involved in the country's political turmoil, including armed ethnic minority groups, according to a joint statement issued after a meeting between the chief and Cambodian Prime Minister Hun Sen in the capital Naypyitaw on Friday.

Min Aung Hlaing also pledged support to the envoy of the 10-member Association of Southeast Asian Nations in fulfilling his mandate to implement a so-called five-point consensus made at a special summit in April, which mentioned a call for an immediate end to violence in Myanmar, according to the statement.

The prime minister of Cambodia, this year's chair of ASEAN, stressed his support for the military leader, saying complete peace and national reconciliation cannot be achieved without participation and agreement from all parties involved, citing Cambodia's lessons learned from the country's peace process that took place from the late 1980s to early 1990s. 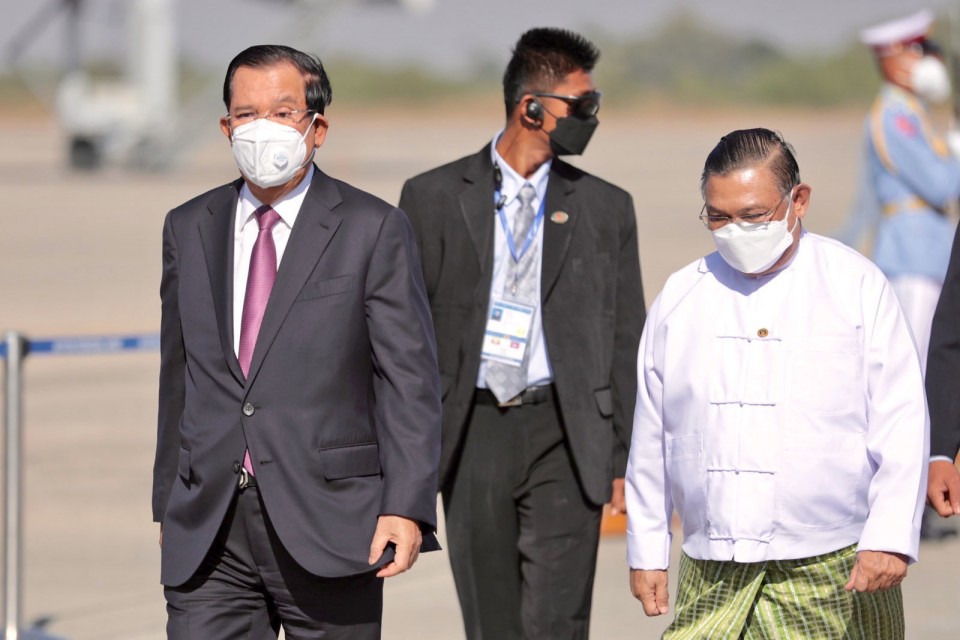 Hun Sen became the first foreign leader to visit the Southeast Asian country since the military seized power in February 2021. He is visiting Myanmar, seeking to make progress on ending the turmoil in the member country, while military authorities appear in no hurry to loosen their grip on power.

However, opponents of the military have protested Hun Sen's visit to Myanmar, claiming he is legitimizing the military government by meeting only the commander of the armed forces but not ousted civilian leader Aung San Suu Kyi, who has been detained since the Feb. 1 coup.

The Cambodian leader arrived at an airport in Naypyitaw on Friday morning and was greeted by the junta-appointed foreign minister, Wunna Maung Lwin, according to a military spokesperson. Hun Sen is scheduled to stay in Myanmar until Saturday.

ASEAN leaders agreed on the five-point consensus and the dispatch of an ASEAN special envoy to meet with all the parties concerned. But the junta has ignored the directive, leading ASEAN to exclude the military leader from summit meetings from October.

Meanwhile, Suu Kyi, who has led the country's pro-democracy camp, remains under house arrest and faces multiyear imprisonment over charges her supporters believe are politically motivated.

Ousted from power in the coup, the pro-democracy camp has been engaging in guerrilla warfare against the military in concert with some armed ethnic minority groups, further deepening turmoil in the nation.

Prior to Hun Sen's visit to Myanmar, pro-democracy forces in the country protested against it and burned photos of the prime minister, according to local media reports. The protests followed explosions near Cambodia's embassy in Yangon on Dec. 31, which caused no damage or casualties.

Phil Robertson, deputy Asia director of Human Rights Watch, said Hun Sen's decision as ASEAN chair to meet the military leader was an affront to the people of Myanmar who strongly opposed the visit.

"In one single, selfish move, Hun Sen showed he's more interested in building his own legacy than listening to the Myanmar people who are demanding ASEAN leaders also meet with their leaders elected in Myanmar's November 2020 election," Robertson said in a statement.