"Today we face a critical juncture. But our nations can confront common challenges, united in the belief about shared values, our shared interest and our shared goals," Emanuel said in a video message posted on the U.S. ambassador's official Twitter account, a day after arriving in Japan. 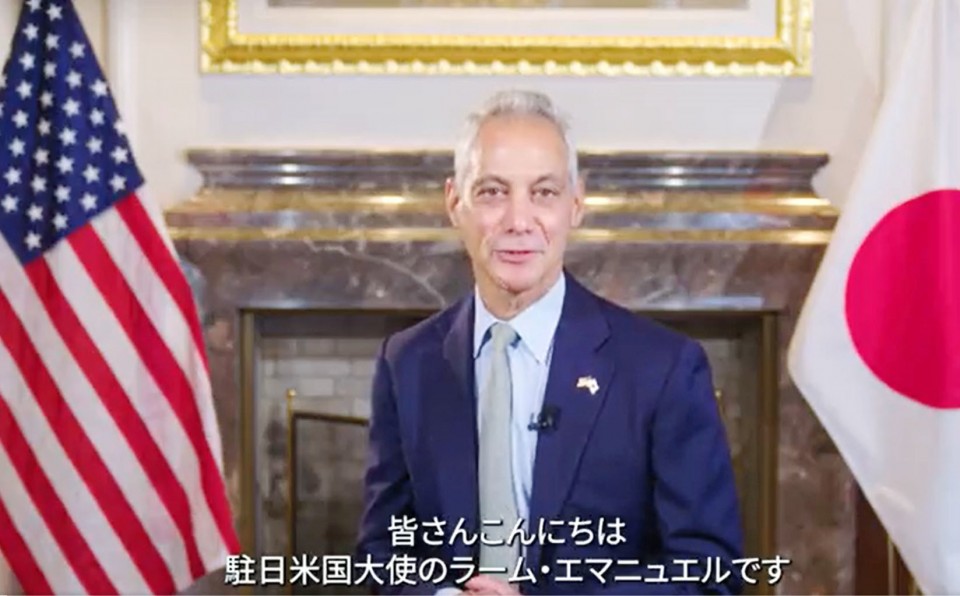 New U.S. Ambassador to Japan Rahm Emanuel speaks in a video message posted on Twitter on Jan. 24, 2022. (From his official Twitter account)(Kyodo)

"This work, our work will determine the destiny of the democratic examples," he added.

Known for his close ties with President Joe Biden, the 62-year-old former top aide to former President Barack Obama filled a key post that has been vacant for more than two years.

Emanuel said the U.S.-Japan partnership has promoted peace and prosperity in the Indo-Pacific region for more than 60 years as a "beacon of endless possibility and promise."

The ambassador added, "Our two nations will not shy away from any challenge, any adversary who undermines those (democratic) values."

During the flight from Chicago to Tokyo, I kept thinking about my parents. Their values and dreams lit a spark in me to pursue public service. Here is my story. pic.twitter.com/oRxDS7cLi9

The Japanese government welcomed his arrival.

"It will be a good opportunity for us to take a new step toward the realization of a free and open Indo-Pacific region, as well as further strengthening of the Japan-U.S. alliance," Chief Cabinet Secretary Hirokazu Matsuno said at a press conference earlier in the day.

The U.S. ambassador post in Japan had been vacant since William Hagerty stepped down in July 2019 to run for the Senate.