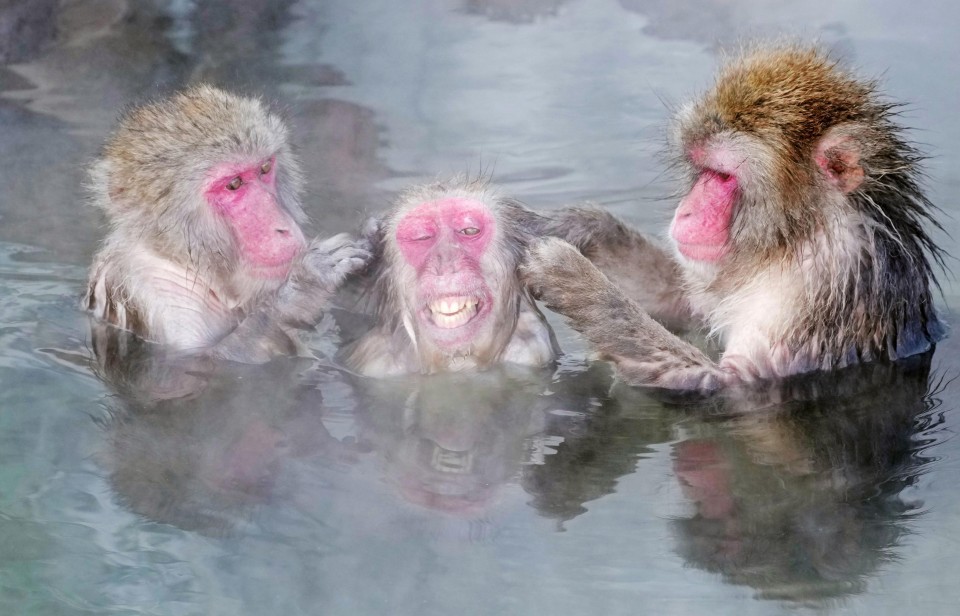 Japanese monkeys look relaxed as they soak in a hot spring at the Hakodate Tropical Botanical Garden in Hakodate in Hokkaido, northern Japan, on Jan. 14, 2022. (Kyodo) ==Kyodo

The tally, based on data provided by local governments across the country, stood at 25,742. Some prefectures reported all-time high numbers of infections, with Osaka and Okinawa confirming 3,692 and 1,829 cases, respectively. Hiroshima reported over 1,000 cases for the first time.

TOKYO - Two high school students and a man were wounded in a knife attack on Saturday just outside the University of Tokyo ahead of nationwide entrance exams and a teenager apparently frustrated with his academic performance has been arrested on suspicion of attempted murder, police said.

The 72-year-old man was seriously injured after he and the two students, aged 18 and 17, were slashed in their backs around 8:30 a.m. in front of one of the gates to the university's main campus, according to the police.

Djokovic has been trying to challenge the cancellation of his visa amid controversy over the entry into Australia on Jan. 5 by the world's No. 1, who has not been vaccinated for COVID-19, ahead of the Australian Open starting Monday.

TOKYO - With the Beijing Winter Olympics and Paralympics approaching, International Paralympic Committee President Andrew Parsons has vowed to deliver a safe event amid the pandemic by making the most of lessons learned from the successful staging of last summer's Tokyo Games.

"I think we have learned a lot from Tokyo, and this will help us navigate through the situation, protecting the athletes and everyone involved," Parsons told Kyodo News in an online interview ahead of the March 4-13 Winter Paralympics.

Japan, France to hold 2-plus-2 security talks in mid-January

The defense and foreign ministers of the two countries are expected to release documents after the two-plus-two talks, the first of their kind since the last session was held in France in January 2019, the sources said.

WASHINGTON - The U.S. government on Friday stepped up its warning against Russia's possible plan to invade Ukraine, saying Moscow appears to be readying an option for a "false-flag" operation in eastern Ukraine to create a "pretext" for aggression.

Tensions have been growing as Russia has amassed troops on its border with Ukraine, triggering concerns over further invasion by Moscow following its 2014 annexation of Crimea. A series of engagements with Russia by the United States and its European allies earlier this week failed to yield any breakthroughs.

The report by the Korean Central News Agency came a day after the launch by the country of what appeared to be two short-range ballistic missiles in its third missile launch in 10 days.