An online petition demanding that Japan ease its tight entry rules to prevent the spread of the Omicron variant of the coronavirus was submitted to the Foreign Ministry on Thursday with about 12,000 signatures, a civic group said.

The petition addressed to Foreign Minister Yoshimasa Hayashi says that the "excessive" border controls have affected those who want to see their families living overseas.

Japan has banned new entries by foreigners worldwide since Nov. 30, following increasing reports on the highly contagious variant. Even entry of spouses and children of Japanese nationals or permanent residents is denied unless they are in "special exceptional circumstances." 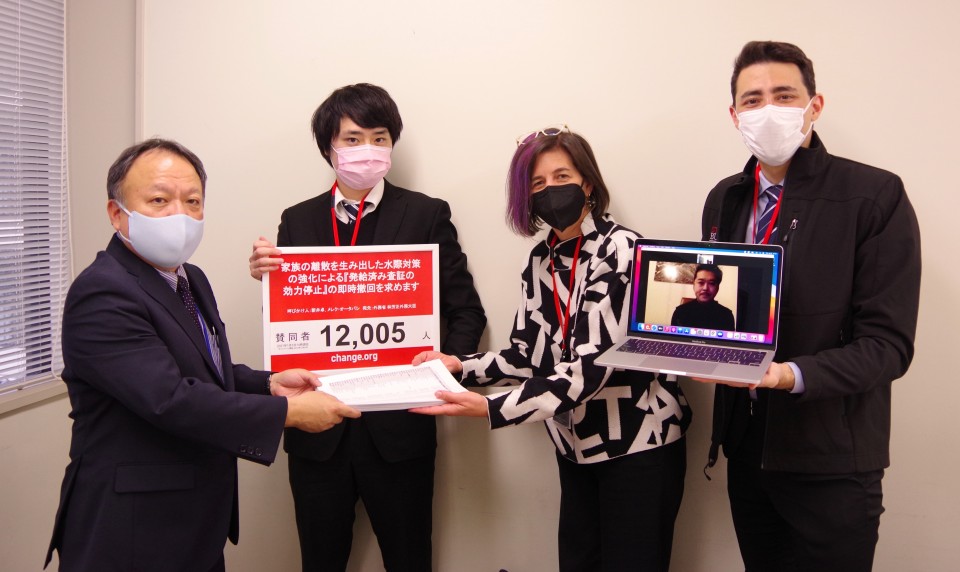 Canadian researcher Melek Ortabasi (2nd from R) and her supporters submit a petition to a senior Foreign Ministry official in Tokyo on Jan. 6, 2022, demanding that Japan ease its entry rules to prevent the spread of the coronavirus. (Photo courtesy of Change.org Japan)(Kyodo)

The government has also suspended the validity of visas issued before Dec. 2 other than those for diplomats, spouses of Japanese nationals and permanent residents, among others.

The campaign to collect signatures for the petition was launched in early December by a group led by Japanese artist Takashi Arai and Melek Ortabasi, an associate professor at Simon Fraser University in Canada.

"We recognize it as an issue of international human rights law," said Arai, whose German wife was denied entry to Japan, at an online press conference held after the group submitted the petition to the ministry.

Ortabasi, a single mother who left her three children in Canada to come to Japan for research work in October, said she will "keep fighting" because she does not want other people to have the same experience.

The children, who had been denied entry, were recently allowed to enter Japan exceptionally. But the family has yet to be reunited as the children are quarantined at a designated facility.

The Japanese government initially said the tightened entry rules would be in place for about a month to year-end but later decided to extend them at least through early this year as the country braces for its sixth wave of COVID-19 infections amid the spread of the Omicron variant.

The measures have been criticized as discriminatory by the World Health Organization, which has urged countries not to impose blanket travel bans, saying they are ineffective in preventing the virus from spreading and place a heavy burden on people's lives.