Daizen Maeda made an excellent first impression with Celtic fans on Monday when he netted within after four minutes on debut as the Scottish giant beat Hibernian 2-0 in the league.

The former Yokohama F. Marinos winger found himself unmarked in the center of the box and made no mistake with the finish, right-footing the ball into the net for the perfect start to his time in Glasgow. 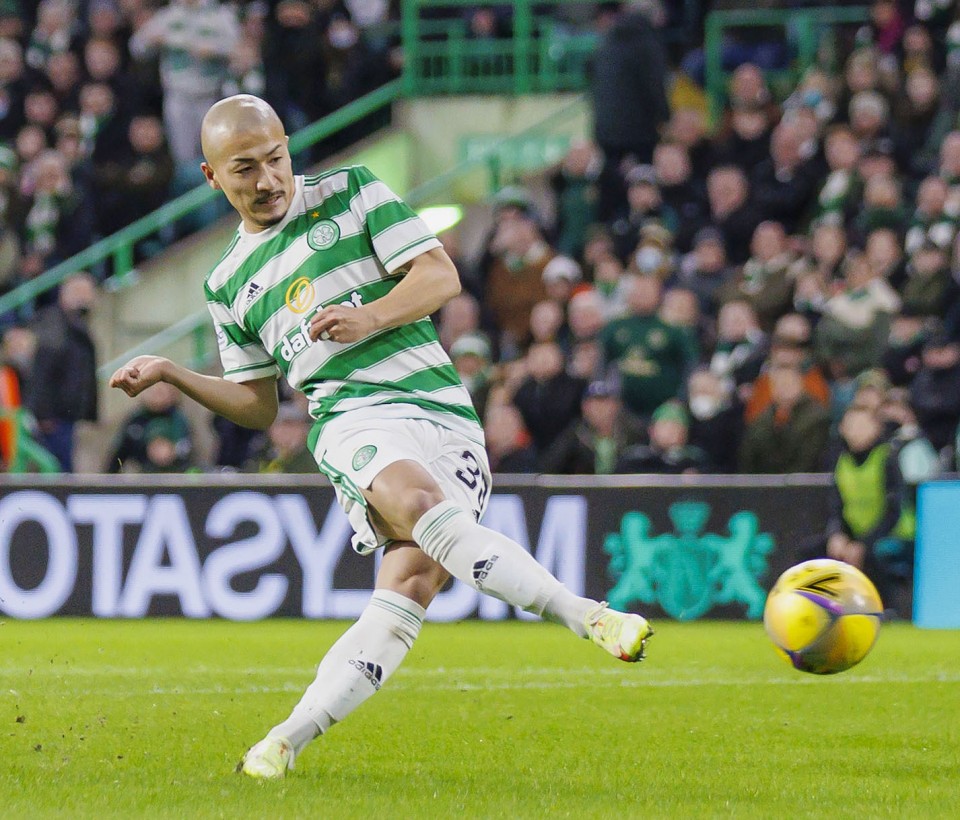 Daizen Maeda of Celtic scores a goal against Hibernian on Jan. 17, 2022, in Glasgow. (Kyodo)

Maeda was joined on Scottish Premiership debut by his countrymen Reo Hatate and Yosuke Ideguchi, the latter coming off the bench to take the place of the former in the 74th minute at Celtic Park.

Former Marinos manager Ange Postecoglou, who brought the Japanese trio to Scotland in the January transfer window, was glowing in his praise of all three.

"I'm sure he is pleased," the Australian said of Maeda. "He's a striker, he's a goal scorer. I thought it was a good game to just expose the lads, and Yosuke later on, to what it is like to play for this football club."

"I thought all three acquitted themselves well."

Maeda grabbed the headlines but it was Hatate who had the biggest impact on the game from midfield, and he almost scored in the 40th minute with a right-foot strike from outside the box that brought a great save out of Hibernian goalkeeper Matt Macey.

"When you get to know him, he is a very determined young man," Postecolglou said.

"He shows signs of reaching the very top of the game, he will come off the pitch tonight knowing he did OK and performed at a level, but he will want more. That is the kind of personality he is."

Celtic's other big-name Japanese player, Kyogo Furuhashi, missed the game as he is still recovering from a hamstring injury sustained in December, with the manager saying he has not recovered as well as the club had hoped he would and will be on the sidelines for another one or two weeks.

"We will just wait and see what happens this week. We were hoping he would return quicker, but we will probably know better later in the week," the 56-year-old said.