Sole yokozuna Terunofuji continued his career dominance over rank-and-file opponent Wakatakakage on Monday at the New Year Grand Sumo Tournament, but things did not go so smoothly for ozeki Takakeisho, who took an upset loss against komusubi Meisei.

Terunofuji, who is bidding for his third consecutive championship, improved to 8-1 head-to-head against No. 1 maegashira Wakatakakage, with the only loss coming from an injury withdrawal in September 2020. 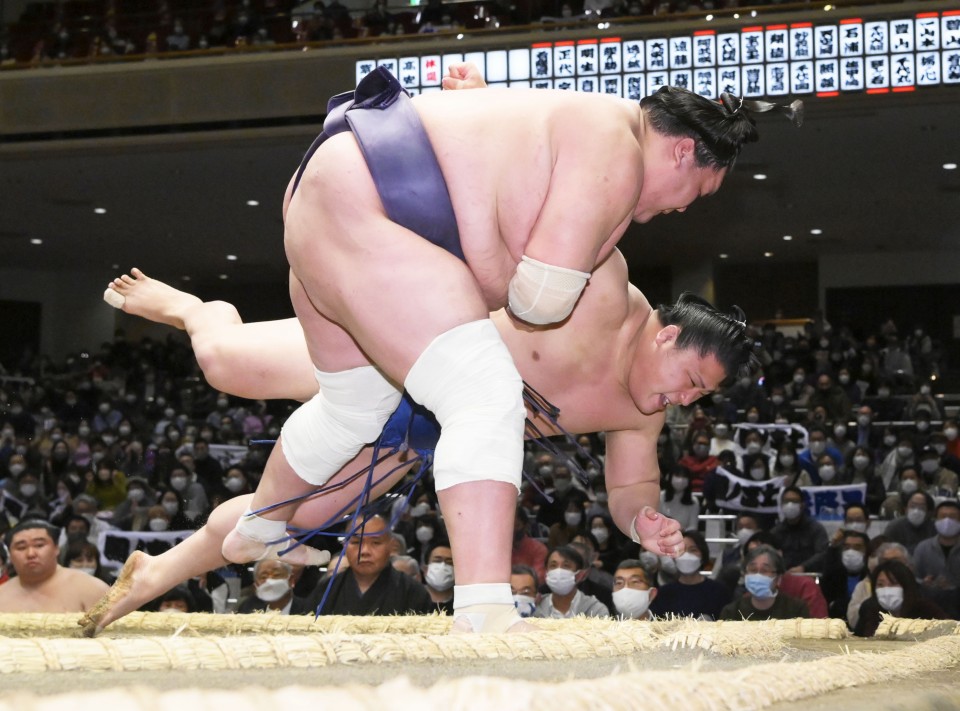 The Mongolian-born grand champion nevertheless had to work for the win on Day 2, digging deep once again following his hard-fought opening-day victory over komusubi Daieisho.

The athletic Wakatakakage (0-2) took Terunofuji right to the edge before the yokozuna snared his arm and sent him tumbling with an arm-lock throw.

Meisei, who was demoted from sekiwake after going 7-8 in November, notched his first win of the year in impressive fashion against two-time grand tournament winner Takakeisho.

The ozeki opened with a strong charge before Meisei (1-1) turned the tables, using quick footwork to slip to the side and thrust Takakeisho (1-1) down.

"I think (my opening charge) went well. I just went with the flow," Meisei said. "I just want to believe in my ability and continue to do my best."

Ozeki Shodai made short work of dangerous No. 2 Ura (0-2), shoving him straight back and out to improve to 2-0. Shodai claimed his first win over the maegashira in their third top-division meeting.

Sekiwake Mitakeumi, looking to make his case for ozeki promotion, notched a convincing win against giant No. 2 Ichinojo (1-1).

Mitakeumi (2-0) fended off Ichinojo's early attempt for a grip and attacked from a low angle to push out his towering adversary.

Sekiwake Takanosho (1-1) earned his first win in his return to sumo's third highest rank, finishing strong against No. 1 Kiribayama.

Former komusubi Kiribayama (0-2) had the initial momentum and drove Takanosho back to the edge, but the sekiwake kept his balance and used an under-shoulder grip to swing his opponent down to the clay.

Daieisho (0-2) took his second loss at the hands of No. 3 Tamawashi (2-0), who quickly wrapped up the bout with a thrust out.

Former komusubi Abi (2-0) continued to look strong with an easy push-out win against No. 5 Chiyoshoma (0-2). Now fighting as a No. 6, Abi jumped nine places after going 12-3 at the November tournament, his first top-division meet since being suspended for breaking coronavirus safety rules in July 2020.