FOCUS:Sino-US growing tensions may jeopardize security in East Asia in 2022

An acceleration of Sino-U.S. tensions may jeopardize the security environment in East Asia in 2022 ahead of key political events in the world's two major powers, making circumstances surrounding Taiwan and North Korea more volatile.

Relations between Beijing and Washington would deteriorate further as U.S. President Joe Biden is set to take a tougher approach to the Communist-led government to garner support from voters with anti-China sentiment before the midterm elections in November. 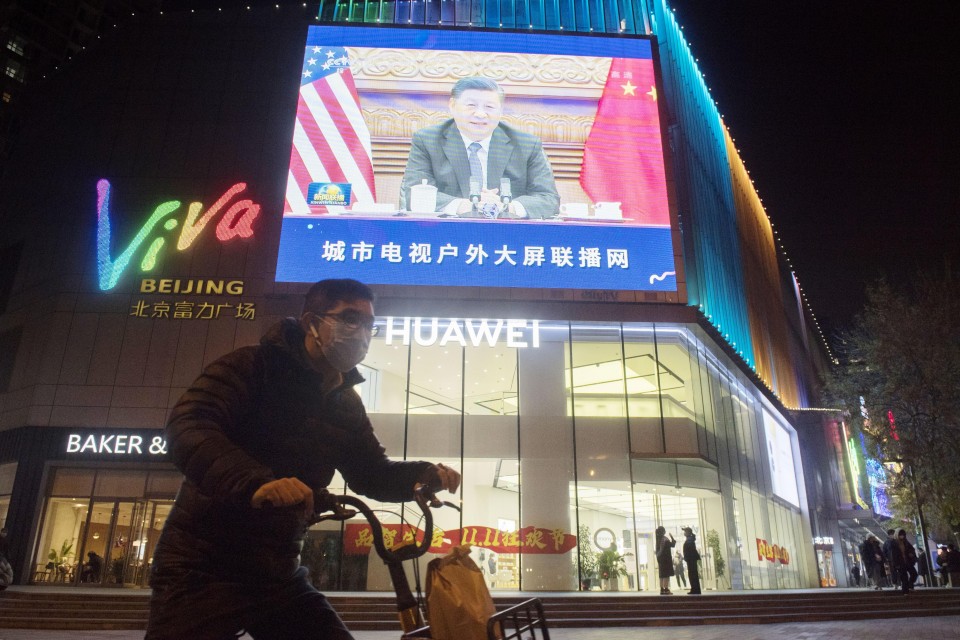 A screen on a street in Beijing shows on Nov. 16, 2021, footage of Chinese President Xi Jinping who held a virtual summit with U.S. President Joe Biden. (Kyodo)

While Chinese President Xi Jinping is expected to intensify provocations against Taiwan to pave the way for his controversial third term as leader, U.S.-North Korea talks on denuclearization and sanctions relief are almost certain to make no headway.

To ease security concerns in the region, Japan and South Korea, whose president will be replaced in May, would be forced to seek balanced diplomacy that will not hurt their ties with either China or the United States, foreign affairs experts say.

"Xi needs to look strong in the run-up to his appointment" at the ruling Communist Party's twice-a-decade congress in fall, "while Biden has been weakened politically and thus it will be difficult for him to adopt a more conciliatory policy toward China," he said.

In addition, the U.S. decision not to send its government officials to the Beijing Winter Olympics, slated for February, will "reinforce perceptions of a new Cold War" and make it "more difficult to pursue diplomatic engagement," Kingston said.

The United States and other democratic nations including Australia and Canada have announced they will conduct a "diplomatic boycott" of the Olympics. Some countries such as Japan have followed suit, although they have refrained from using that expression.

Victor Teo, a political scientist at the University of Cambridge, said, "The United States is doing its very best to rally and strengthen its camp or bloc to prevent China from catching up."

With Sino-U.S. tensions escalating, the cross-strait security situation would become more fragile, as Xi has been keen to reunify self-ruled, democratic Taiwan with the mainland during his tenure.

Teo expects Beijing not to use military might to invade Taiwan this year as it could backfire on Xi, but he warned Washington and its allies "should not underestimate the resolve" of the party to "protect China's sovereignty."

"The triggering mechanism will be something Taiwan does in tandem with the United States or Japan which the Chinese find unacceptable," he said. 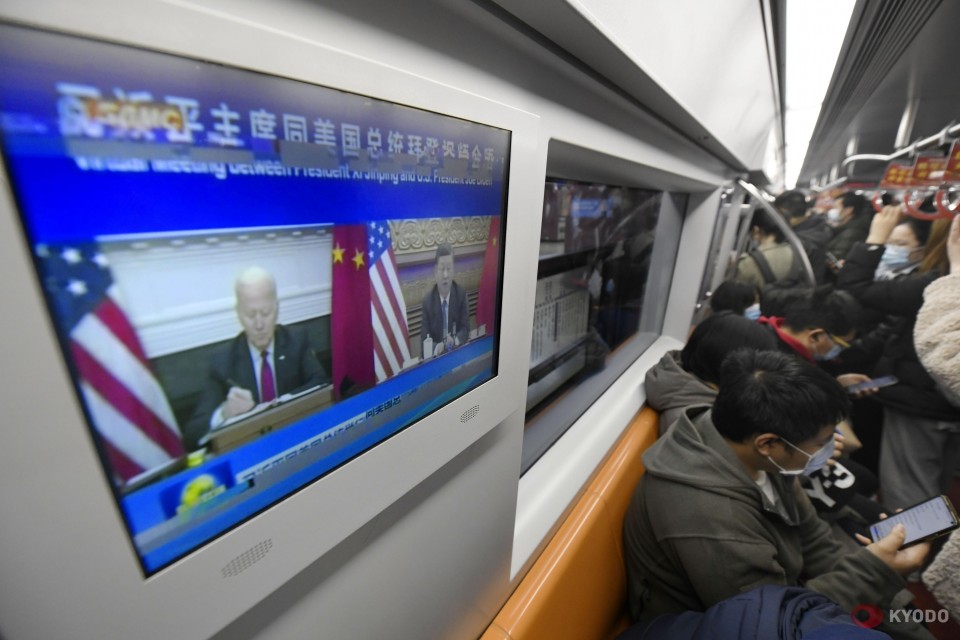 A screen inside a subway train in Beijing shows on Nov. 16, 2021, the news of a virtual summit between Chinese President Xi Jinping and his U.S. counterpart Joe Biden. (Kyodo) ==Kyodo

Late last year, Biden signed into law a defense bill voicing the desire of Congress that the nation's support to Taiwan include inviting the island in 2022 to join a U.S.-led multinational naval drill that started in 1971 -- one of the world's biggest of its kind.

If Taiwan takes part in the Rim of the Pacific exercise, known as RIMPAC, it would be the first time since Washington switched its diplomatic recognition from Taipei to Beijing in 1979.

A diplomatic source in Beijing said the island's participation would "absolutely anger the party and could cause military conflict in the Taiwan Strait."

The movements of North Korea, whose economy has been stagnant amid the COVID-19 global outbreak, would also draw attention, as its negotiations with the United States, stalled for over two years, have shown few signs of resuming in 2022.

North Korea has acknowledged it faces a severe food crisis due in part to natural disasters and sluggish trade with China, its closest and most influential ally, in the aftermath of the novel coronavirus spread.

At a plenary meeting of the Central Committee of the ruling Workers' Party of Korea in late 2021, leader Kim Jong Un pledged to rebuild the agricultural sector, state-run media reported, suggesting he would concentrate on revitalizing the domestic economy.

North Korea might become eager to begin talks to formally end the 1950-1953 Korean War for sanctions relief, but Temple's Kingston said this would "require a level of diplomatic engagement" between Washington and Pyongyang that "seems unlikely."

"It could be a confidence-building measure but there is precious little trust to build on," he added.

The war -- in which U.S.-led U.N. forces fought alongside the South against the North backed by China and the now-defunct Soviet Union -- ended in a cease-fire, not a peace treaty. South Korean President Moon Jae In has sought a declaration to formally bring an end to the state of war.

Troy Stangarone, a senior director at the Korea Economic Institute in Washington, said, "Until an end of war declaration is embedded in a deeper process of building a lasting peace, it is likely to remain more of an aspiration than reality."

With the security environment in East Asia becoming more challenging, South Korea and Japan, U.S. security allies in the region, should work as intermediaries between the United States and China, the experts say.

Japan has been recently at odds with China over Taiwan, while Moon's government is believed to be putting more emphasis on relations with Xi's leadership than on those with the Biden administration from the economic perspective.

Moon, however, has agreed with Biden that South Korea and the United States will try to bolster their ties in various fields such as diplomacy and security. The agreement has been supported by both ruling and opposition parties in Seoul.

A source familiar with politics in Asia, meanwhile, said the role of Japan's Prime Minister Fumio Kishida, who assumed the post in 2021, is "to improve relations with South Korea," which have worsened sharply over unresolved historical grievances and other disputes.