Sekiwake Mitakeumi officially joined sumo's second-highest rank of ozeki after his promotion was decided by the Japan Sumo Association board of directors on Wednesday.

The 29-year-old, whose real name is Hisashi Omichi, clinched his third career championship with a 13-2 record at the just-ended New Year Grand Sumo Tournament, and achieved 33 wins over three straight tournaments which is a benchmark for ozeki promotion.

Sumo wrestler Mitakeumi (2nd from R) bows as he is officially informed of his promotion to ozeki, the second-highest rank in the sport, during a ceremony at the Dewanoumi stable in Tokyo on Jan. 26, 2022. (Pool photo) (Kyodo) ==Kyodo

Messengers from the JSA delivered news of his promotion to the Dewanoumi stable where Mitakeumi gave his acceptance speech, a custom for wrestlers newly promoted to the rank.

"I will try not to tarnish the name of ozeki by embracing gratitude, expressing my own style and devoting myself to the way of sumo," Mitakeumi said.

According to the JSA, Mitakeumi is the first Nagano Prefecture native in 227 years to reach ozeki status.

At 29 years and 1 month, he is also the sixth-oldest wrestler since the six-basho system was introduced in 1958 to move up to ozeki rank, one below yokozuna.

"I feel relief. I was really nervous," Mitakeumi said after bowing and speaking into the microphone on a red-carpeted stage.

"My mentor from junior high school taught me to always be grateful for sumo," he said, explaining why he chose to use the word "gratitude" when formally accepting the honor.

The last wrestler to make his debut as ozeki was Shodai. He did so after the autumn meet in 2020.

Mitakeumi's promotion means there will be one yokozuna and three ozeki at the March basho in Osaka. 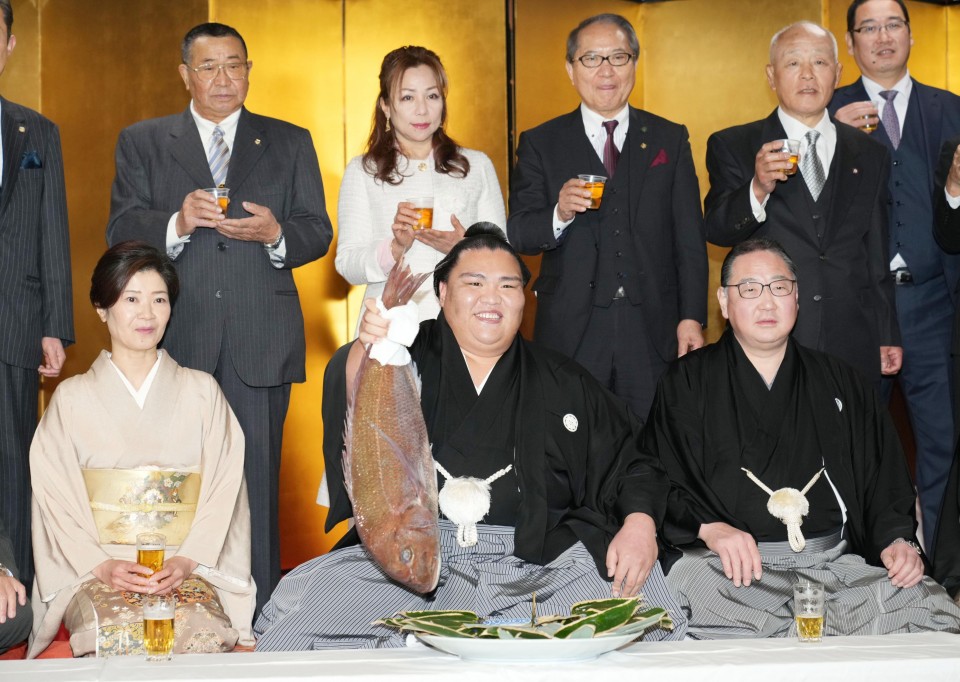 Sumo wrestler Mitakeumi (C in front row) holds a sea bream at the Dewanoumi stable in Tokyo on Jan. 26, 2022, after being officially informed of his promotion to ozeki, the second-highest rank in the sport, earlier in the day. (Pool photo) (Kyodo) ==Kyodo