The Japanese government reopened a mass COVID-19 vaccination center in Tokyo on Monday to speed up administering third shots to cope with the new wave of infections driven by the highly transmissible Omicron variant.

The center, which opened amid criticism that the government has been slow to offer booster shots, is being run by the Self-Defense Forces and will offer people aged 18 or above U.S. pharmaceutical firm Moderna Inc.'s vaccine.

Prime Minister Fumio Kishida, who visited the site on Monday, said his administration "will explain in detail about the importance of booster shots and the effectiveness of mixing and matching vaccines" to the public. 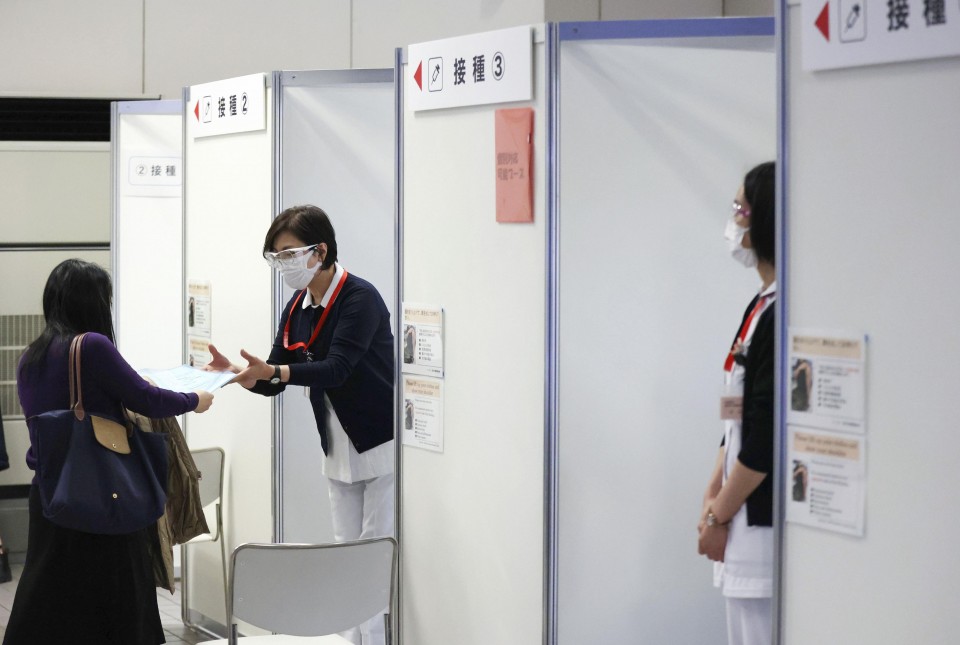 COVID-19 mass vaccinations operated by the Japan Self-Defense Forces begin at a facility in Tokyo's Otemachi business district on Jan. 31, 2022, for people aged 18 or older getting their third shots. (Pool photo) (Kyodo) ==Kyodo

Kishida urged people to get jabbed speedily after receiving their vaccine tickets from local municipalities.

The center, however, is unlikely to contribute drastically to accelerating the pace of inoculations. Capacity is initially limited to 720 slots per day, much fewer than the 10,000 available at the same venue from May to November last year, with the malfunctioning of an elevator in the aging facility reducing available space to one floor.

Responding to criticism on the low availability of such slots, Kishida told parliament his government will "make thorough efforts to expand the numbers," adding he has also been seeking the cooperation of municipalities to set up such mass inoculation centers.

Japan is facing a resurgence of infections, with new cases nationwide reaching 84,000 Saturday, a record high for the fifth straight day.

The nationwide count on Monday totaled 60,836, with patients having severe symptoms up 16 at 783, according to a Kyodo News tally based on local government releases.

The number of daily COVID cases in Tokyo on Monday topped 10,000 for the seventh straight day with 11,751 infections, while the ratio of designated hospital beds occupied by COVID-19 patients in the capital hit 49.2 percent the same day, nearly reaching the 50 percent threshold above which the metropolitan government will consider seeking a state of emergency declaration.

Daily cases on Mondays tend to be lower due to less testing over the weekend.

The Tokyo center will expand slots to 2,160 on Feb. 7, while an Osaka mass vaccination center will start operation on the same day with 960 slots per day.

The number of slots at the Osaka venue is down from 5,000 available at an SDF-run facility in a different location in the city last year due to constraints on the size of the building the government could secure this time.

The Tokyo and Osaka venues will be open from 8 a.m. to 8 p.m. every day. Those who want to receive the shots need to have vaccination tickets issued by local governments and make reservations on the designated website.

People can make reservations from anywhere in Japan, but six months must have passed since their second vaccination. The slots from Monday through Saturday have all been filled, according to the government.

"I am thankful as I wanted to take the shot as soon as possible, but I could not receive it in my hometown. I feel relieved because I don't want to spread the virus to my family," said Hiroshi Ito, a 57-year-old resident of Tokyo's Sumida Ward who came to the Tokyo venue in the morning. 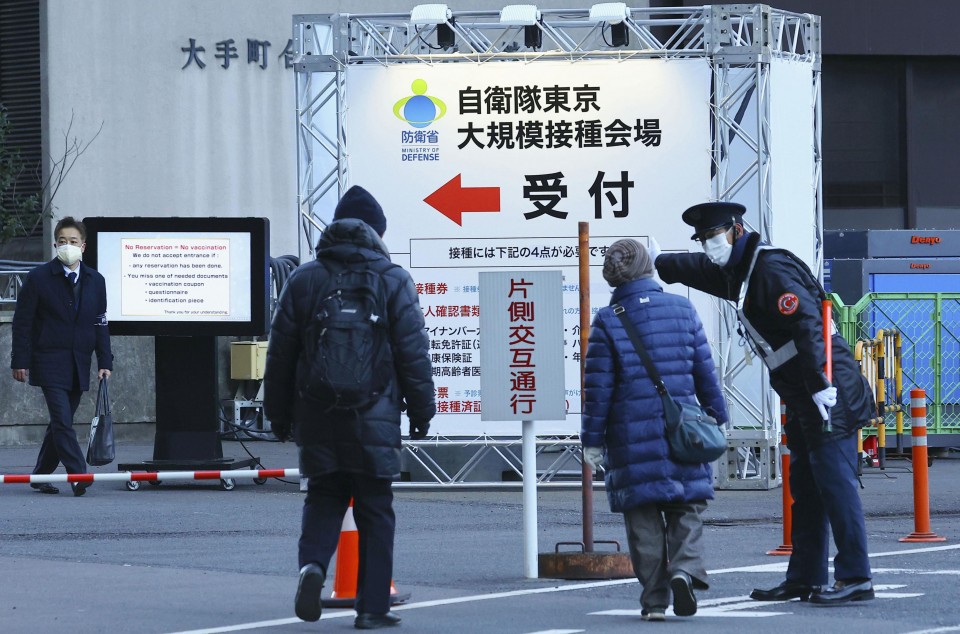 People head to a facility in Tokyo's Otemachi business district on Jan. 31, 2022, for COVID-19 vaccinations. Mass vaccinations operated by the Japan Self-Defense Forces began the same day for people aged 18 or older getting their third shots. (Kyodo) ==Kyodo