A transport vessel of Japan's Maritime Self-Defense Force departed Monday for Tonga as part of the country's continuing relief efforts to the Pacific islands nation, which was hit by an undersea volcanic eruption and a tsunami earlier in the month.

The Osumi departed from the Kure base in western Japan with 60,000 liters of drinking water prepared by the Japan International Cooperation Agency, a government-linked aid agency, as well as 60 high pressure washers to remove volcanic ash, according to the Defense Ministry. 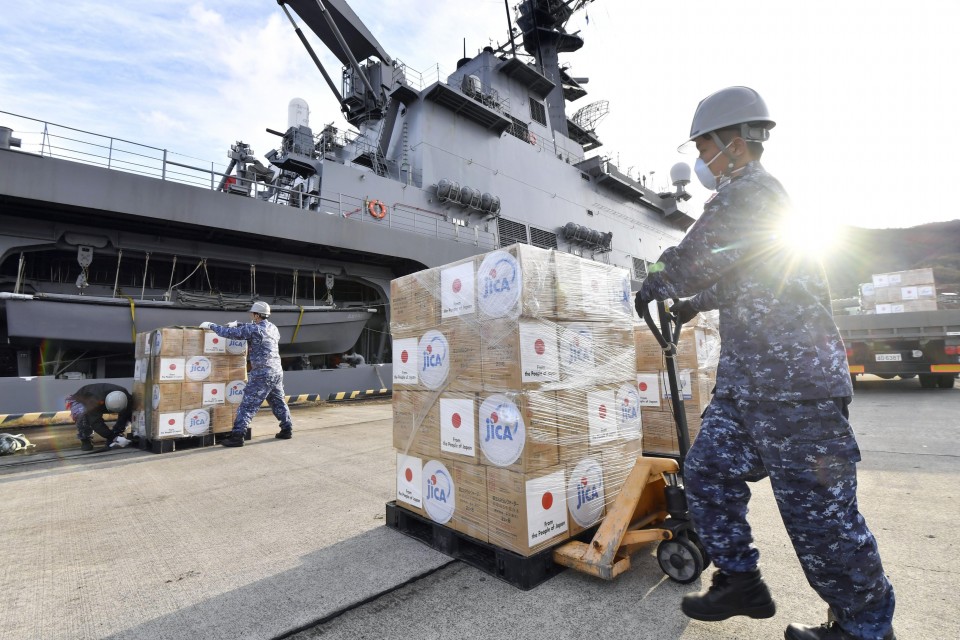 Aid bound for Tonga is being loaded onto the Maritime Self-Defense Force vessel Osumi at the Kure base in Hiroshima Prefecture on Jan. 24, 2022. (Kyodo)

Around 300 people are also aboard as part of the aid effort. The vessel is also carrying two hovercraft and two CH-47 Ground Self-Defense Force transport helicopters.

The helicopters will be used to rapidly disburse relief material, the Self-Defense Fleet's commander-in-chief responsible for the relief effort said.

Hideki Yuasa said in a statement the fleet will do its "utmost" to help the nation in its recovery efforts.

The eruption of the undersea volcano on Jan. 15 sent tsunami waves across the Pacific, killing at least three people in Tonga and causing extensive damage to infrastructure and disrupting water supplies and communication networks.

The Tonga government said Friday that 84 percent of the population of around 107,000 have been affected by falling ash and tsunami.

As part of its aid effort, Japan has already dispatched two C-130 and two C2 transport planes carrying drinking water and other supplies with the first batch having arrived in Tonga on Saturday.