An increasing number of schools in Japan are using tablet computers to bring the classroom virtually to students who cannot attend lessons in person for reasons such as long-term illness or unwillingness to come to the campus.

Experts say the remote lessons could act as an impetus to get them used to eventually learning amongst their peers again in the classroom. 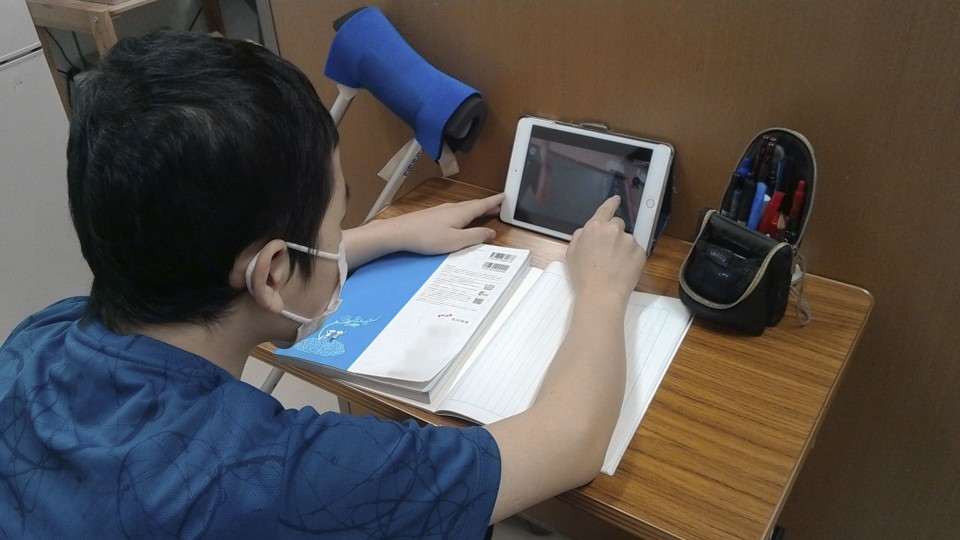 A student uses a tablet computer to take a lesson at a hospital in the city of Kyoto in October 2021. (Photo courtesy of iPresence)(Part of the photo has been pixilated for privacy reasons)(Kyodo)

At Kyoto Sowa High School operated by the Kyoto municipal government, a first-year student who had stopped attending school because of the psychological discomfort he felt now studies via a tablet in a separate room from his classmates.

"I find it difficult to enter the classroom," said the student, explaining that he found it hard to get along with others. But he is still eager to learn.

Initially, Sowa provided him with a conventional tablet for study in a separate room but he found it ineffective because he could hardly make out the words on the blackboard or hear his teachers' lessons in the classroom.

To remedy the situation, the school introduced a new tablet device with a built-in camera set up on a desk in front of the teacher's podium to film the teacher and the blackboard.

The student can remotely operate the camera via an app on his tablet, allowing him to magnify the images of his teacher or change the camera angle to get a better view of the blackboard.

The brainchild of iPresence, an information technology company based in Kobe, Hyogo Prefecture, the service is called "kubi." As the name, which means "neck," would suggest, the stand can turn left and right (by 300 degrees) and move up and down (by 90 degrees).

With the tablet system, "we would like to increase options for learning for students unable to come to school," said Kaori Onjo, a teacher at Sowa. The system will "also be a step toward group learning," she added.

The use of tablets also provides hospitalized children with opportunities to learn away from the classroom.

A sixth-grade boy at Kyoto Municipal Katsurazaka Elementary School who suffers from a serious illness was hospitalized almost throughout the first term of the current school year. After leaving the hospital, he was still unable to immediately attend school and took lessons online using the "kubi" service, mainly from home. 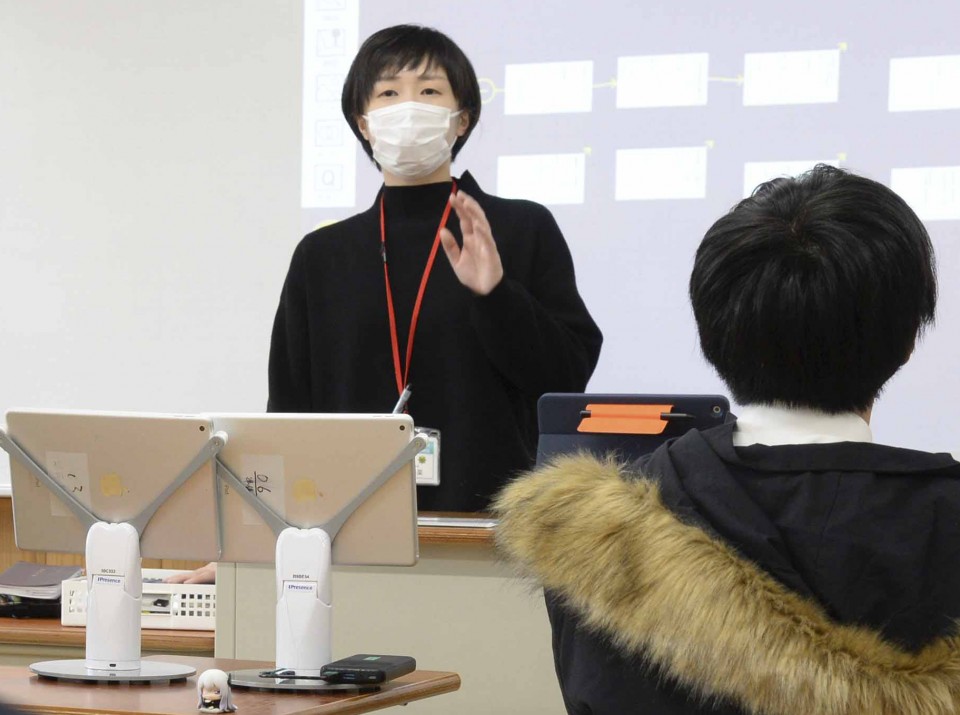 A teacher at Kyoto Sowa High School in Kyoto uses a tablet computer to stream a lesson in December 2021. (Kyodo)

Since the tablet enabled the boy to ask his teacher questions and talk with friends, "the lessons were really no different from those in the classroom, and I was glad because I could attend them during my follow-up visits to the hospital," he said. He attended classes online two to three days per week.

"There are children unable to go to school because they are sick. We want to create learning opportunities for as many children as possible through the widespread use of devices like this," said Akihiro Ueda, principal of the elementary school.

According to the education ministry, some 240,000 elementary, junior high, and senior high school students in Japan did not attend school for health and other reasons, including concerns over interacting with classmates, in the 2020 school year.

The ministry permits schools to use information and communication technology to provide learning opportunities for such children as part of their compulsory education. As long as certain conditions are met, online participation in lessons is counted as school attendance.

"The use of tablets may enable truant kids to take a step forward because not only can they receive lessons but also communicate with teachers and friends via the tablets," said Noriko Obana, an analyst familiar with online education.