Hayashi points to U.S. forces over COVID surge in parts of Japan

Foreign Minister Yoshimasa Hayashi said Thursday clusters of COVID-19 cases at U.S. military facilities in Japan have possibly caused a resurgence of infections in some areas of the country.

"We cannot deny the possibility that the infection situation in the facilities of U.S. forces is one of the factors behind the spread of the virus in their surrounding areas," Hayashi told a press conference at the Japan National Press Club, adding, "I take it so seriously."

Hayashi's remarks came as Japan has seen its sixth wave of the pandemic spurred by the Omicron variant of the coronavirus. Some governors argue that increasing cases in their prefectures are attributable to the spread of infections at U.S. bases in Okinawa and Yamaguchi prefectures. 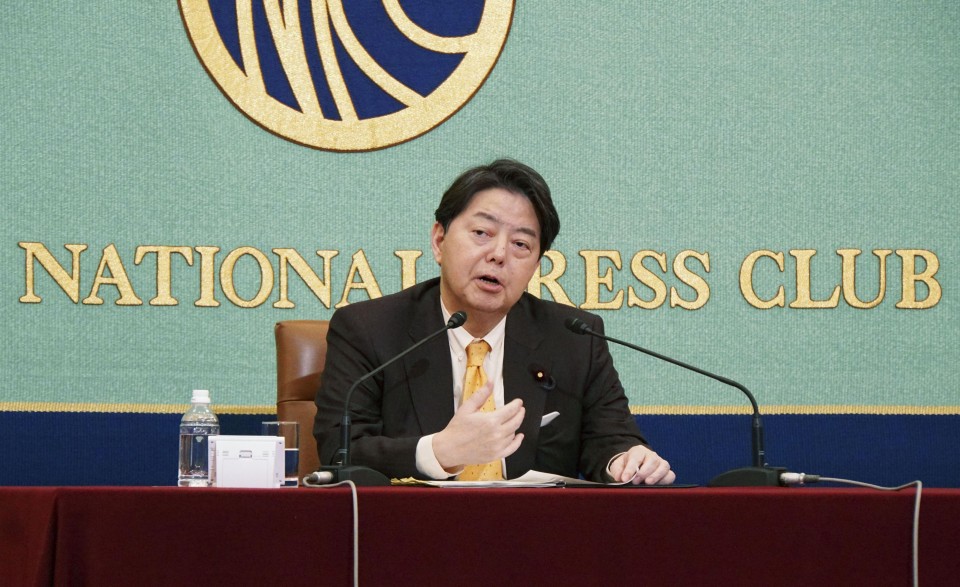 Yamaguchi and its neighboring Hiroshima Prefecture in western Japan as well as Okinawa, a southwestern island, have been under a quasi-state of emergency since Sunday, with the governors enabled to request restaurants and bars to close early and stop serving alcohol.

U.S. forces personnel coming to Japan were previously exempt from being tested for the coronavirus. But a cluster of infections at one of the bases in Okinawa in December prompted the Japanese government to ask the U.S. military to introduce stronger antivirus measures, including a curfew on bases in Japan.

Meanwhile, Prime Minister Fumio Kishida has avoided expressing his view on a possible causal relationship between surging infections among the U.S. military personnel and local residents, saying that it is "difficult" to determine the cause of infections.

Kishida has also turned down Okinawa Gov. Denny Tamaki's request to overhaul the Japan-U.S. Status of Forces Agreement, a hosting deal under which U.S. military personnel and related people are exempt from Japanese quarantine rules.

Hayashi, who took up his post in early November, said that China's military expansion and attempts to unilaterally alter the status quo in the East and South China seas pose "strong concerns."

The foreign minister said it is vital for Japan and China to play a role as major regional powers for peace and prosperity in the region and the international community.

"We need to build a stable Japan-China relationship through cooperation in common challenges," such as climate change and North Korea's missile and nuclear programs, Hayashi said.

The minister added that China's ruling Communist Party's twice-a-decade congress in fall will re-elect President Xi Jinping as the leader for an unusual third term.

Hayashi said 2022 is "an election year," referring to presidential elections in South Korea in March and France in April, as well as Japan's House of Councilors election in the summer and U.S. midterm elections in November.

"Nations that have overcome domestic challenges will get more aggressive on the diplomatic front," he said.

All U.S. forces' personnel to take virus test after arrival in Japan