Japanese Prime Minister Fumio Kishida said Tuesday he will push for a green and digital transformation as part of his efforts to create a new form of capitalism, in an address at a virtual World Economic Forum event.

In his speech at the Davos Agenda conference, Kishida, who took office in October, stressed the need to overhaul economic and social structures by keeping universal values such as democracy, pointing to the risks posed by state capitalism in an apparent reference to countries such as China. 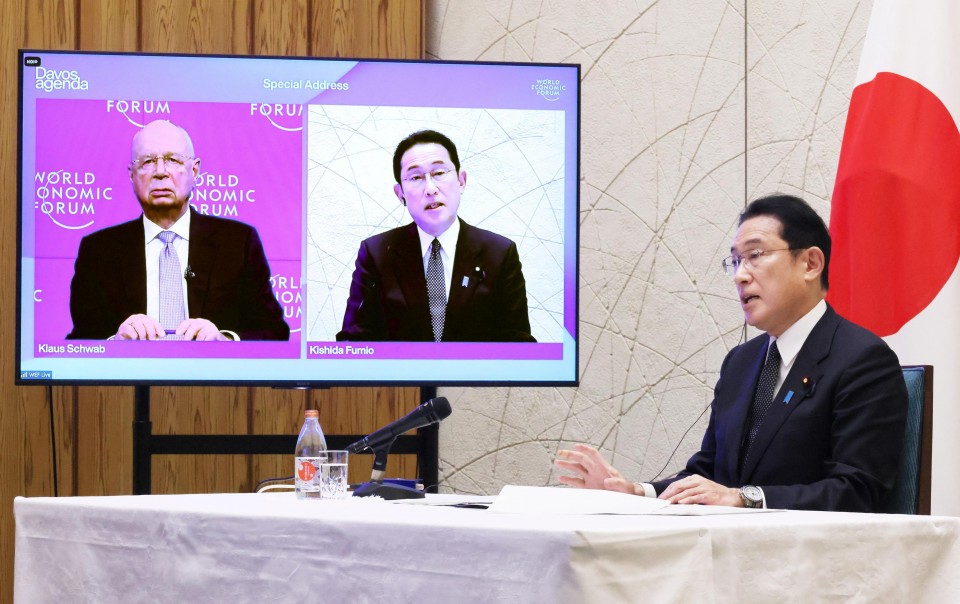 "Japan is determined to lead this global trend in this new form of capitalism and demonstrate concrete examples of how capitalism can evolve as we assume the Group of Seven presidency next year," Kishida said.

Kishida expressed his hope of creating a "zero-emission" community in Asia by promoting joint investment and financing or shared technological standards in hydrogen and other green energy sources as the region faces geopolitical and geoeconomic challenges. He compared the framework to the European Union, which evolved from the European Coal and Steel Community during the Cold War.

Kishida said the COVID-19 pandemic has created an "opportunity" for Japan to promote digitalization, adding that his country will build infrastructure such as seabed cables and optical fiber networks, as well as data centers in various parts of the nation, to cope with a surge in data volume.

"Abenomics achieved great results, but it is clear that the efforts made thus far are not enough to transform the Japanese economy into a sustainable and inclusive one," Kishida said, referring to the economy-boosting program pushed by former Prime Minister Shinzo Abe, consisting of bold monetary easing, fiscal stimulus and structural reforms.

"My Cabinet will build on Abenomics...and boldly pursue the transformation of the Japanese economy" with the focus on a green society and digitalization, the prime minister said.