Yokohama Canon Eagles scored eight tries in a 55-21 hammering of Kobelco Kobe Steelers on Saturday, with center Yusuke Kajimura running in a hat-trick, as they made it two wins from two in Japanese rugby's newly launched League One.

Canon wing Chihito Matsui, Japan's Tokyo Olympic sevens captain, opened the floodgates in the first minute at Nissan Stadium, getting on the end of a grubber kick from Japan flyhalf Yu Tamura before the home side added three more tries in the first 14 minutes. 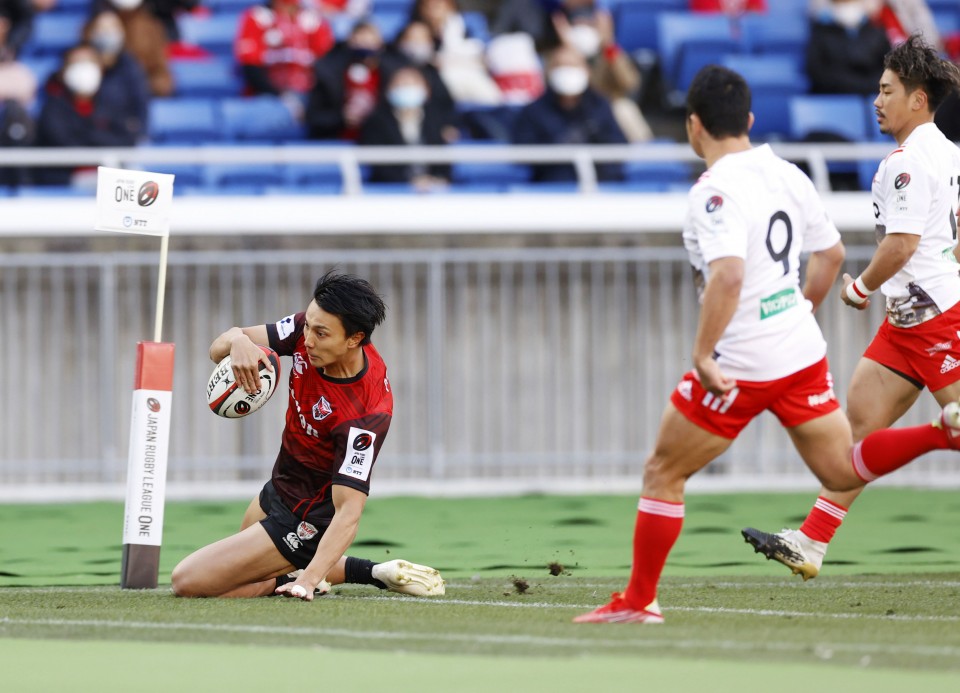 Chihito Matsui (L) of Yokohama Canon Eagles scores a try during a Japan Rugby League One match against Kobelco Kobe Steelers on Jan. 15, 2022, at Nissan Stadium in Yokohama, near Tokyo. (Kyodo)

Another Tamura grubber found Japan No. 8 Amanaki Lelei Mafi en route to a 10th-minute try from scrumhalf Koki Arai, with Kajimura and fullback Jumpei Ogura also going over with ease in the following minutes for a 24-0 lead.

Kobe wing Fraser Anderson caught a punt and touched down for the Steelers' first try in the 22nd minute. A big Matsui big carry led to Kajimura's second try before Kobelco hooker Ryuhei Arita got his team's second try as the hosts led 34-14 at the break.

Mafi took the wind out of the visitors' sails with a try three minutes into the second stanza, stealing a march on the Kobe defense at a ruck near their try line to ground the ball in-goal.

Japan fullback Ryohei Yamanaka scored down the right for the Steelers to once more reduce the arrears to 20 points, but Kajimura completed his hat-trick a few minutes later. Getting quick ball from another breakdown just inside the opposition half, Kajimura then displayed impressive pace and footwork.

"We were beaten heavily by Kobe last year (in the Top League) and that frustration was on show from us today," Kajimura said. "I'm glad we could show our will to make new Eagles history. We'll aim for the top four this season."

Kobus van Dyk scored the last try of the game as Canon claimed a bonus point for getting three more tries than Kobe, who had three. The visitors have two defeats from two games.

"It was our first game at home against a wonderful team and we had a good week of preparation," said Tamura, who kicked 11 points.

The Spears were to open the new league's season on Jan. 7, but their game was canceled when coronavirus infections prevented Saitama Wild Knights from playing.