The surge in people infected with the coronavirus amid the spread of the highly contagious Omicron variant is causing apprehension at outpatient clinics, generally the first stop for individuals in Japan to check if they have the virus.

Doctors say they are stretched almost to breaking point and that seeing more patients has become increasingly difficult. Japan reported a record 62,610 new infections on Tuesday, topping 60,000 for the first time. 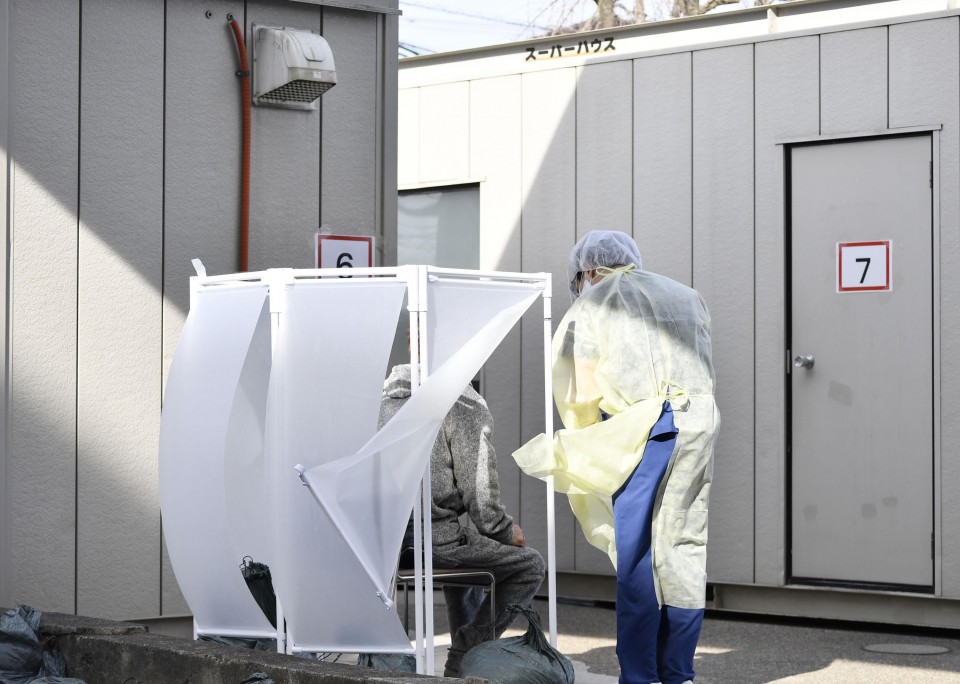 Coronavirus PCR testing is carried out outside a prefabricated hut of Saitama Cooperative Hospital in Kawaguchi in Saitama Prefecture, near Tokyo, on Jan. 24, 2022. (Kyodo) ==Kyodo

Japan's health ministry said Monday young people with low risk of severe COVID-19 symptoms can recuperate at home instead of going to hospitals in regions where medical systems are expected to be strained. The move is intended to ease pressure on health care institutions and avoid the possibility of older people who are at a higher risk of severe illness being left untreated.

One apprehensive institution is the Saitama Cooperative Hospital in Kawaguchi near Tokyo. On Monday, around 30 people waited to be checked at a hospital restaurant that has been turned into an additional waiting area to deal with the overflow of outpatients.

Many of them were young people who came with other family members. They wrote down their symptoms on medical forms as they waited, answering such questions as whether they had a fever, cough or shortness of breath. Occasionally coughs could be heard.

The hospital says that it has been seeing large increases of feverish patients wishing to be tested for the coronavirus since soon after the New Year holidays.

Around the end of last year, the hospital was receiving fewer than 10 outpatients a day. By last week, that number had more than quintupled.

The existing room for patients waiting to be tested and examined quickly became insufficient to accommodate the large influx of people. The hospital restaurant was turned into an additional waiting room on Jan. 11.

The usual staff and nurses needed help from the hospital's restaurant workers to manage reception duties.

The positivity rate of outpatients is high. On Saturday, around 60 people out of some 80 outpatients at the hospital, or 75 percent, tested positive. Four doctors spent the next day reporting test results to public health centers and calling patients.

"Few people have severe symptoms but the infectiousness of the Omicron variant is completely different from that of previous variants," said Keitaro Goto, 47, the hospital's emergency department manager.

During the fifth wave of coronavirus infections last year, fueled mainly by the Delta variant, all of the hospital's 15 beds for COVID-19 patients were filled. Currently, most people coming for tests have only mild symptoms, meaning bed space is still available.

Goto said his hospital has been able to treat elderly patients promptly so far, but is worried about the future.

"It is difficult to maintain the current situation for a long period. There is potential concern that this can affect general practice and we will be unable to save lives that can be saved," he said.