The eruption of an underwater volcano off Tonga on Saturday that caused tsunami waves of up to around 1 meter to hit parts of Japan's coast stumped weather experts, as volcanic eruptions are said to rarely cause a rise in tide levels.

Hunga Tonga-Hunga Ha'apai, an underwater volcano located about 8,000 kilometers from Japan, erupted around 1:10 p.m. Saturday Japan time, resulting in a plume of smoke reaching a height of 16,000 meters and blanketing the area in a thick film of volcanic dust, according to satellite imagery.

Japan's weather agency released information at 7:03 p.m. saying slight changes in sea levels were expected but initially denied there was cause for alarm.

But it changed its tune and decided to issue a tsunami warning and advisory after tide levels continued to rise along Japan's Pacific coast from around 8 p.m. 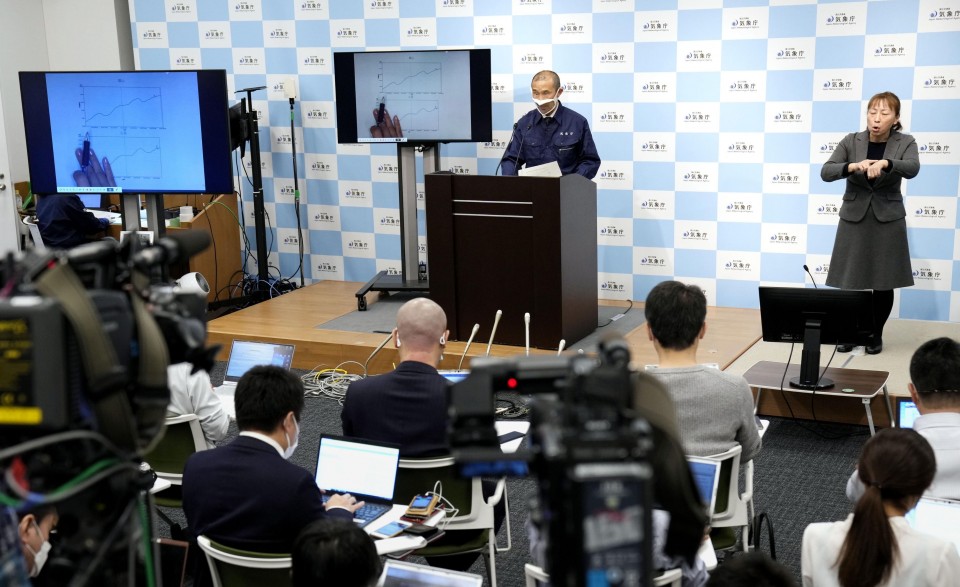 An official of the Japan Meteorological Agency speaks at a press conference on Jan. 16, 2022, about the tsunami warning issued in response to an underwater volcanic eruption off the coast of Tonga. (Kyodo)

The tidal changes, which came two and a half hours earlier than expected, did not match the characteristics of a tsunami, the agency said, adding at a press conference later that it "did not know the mechanism."

Tsunami caused by earthquakes occur when the violent movement of tectonic plates that contain the seafloor creates massive displacement in a body of water.

When a tsunami is generated in distant waters, it passes through several observation points before reaching Japan, enabling its size and arrival time to be estimated.

But the phenomenon on Saturday confused weather agency officials as tide level changes were only a few dozen centimeters at Saipan and other observation points between Tonga and Japan, and they changed too quickly for a tsunami.

Experts have theorized that the tidal wave was caused by a shock wave known as an "air tremor" that pushed the sea level down and raised the tide level in coastal areas when it hit Japan.

Hiromu Okada, a professor emeritus at Hokkaido University, said volcanic tsunami have occurred in Japan in the past and criticized the response of the weather agency.

"If such a large-scale undersea eruption occurs, it should naturally be assumed to cause a tsunami," he said. 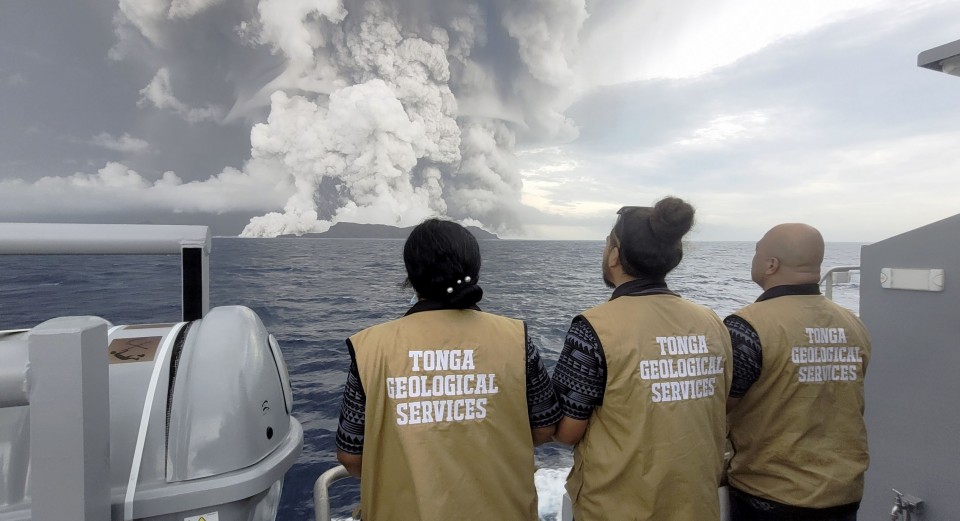 In Tosashimizu, Kochi Prefecture, which was hit by tsunami waves of up to 90 cm, Mayor Mitsunobu Hijiya gathered his staff after a warning was finally issued shortly past midnight Saturday.

The city would usually send out a broadcast and prepare evacuation shelters in such a situation, but it had not expected a tsunami to be caused by anything other than an earthquake, he said.

During the 2011 massive earthquake in northeastern Japan, the weather agency issued its first tsunami warning three minutes after the temblor, initially predicting waves of between 3 to 6 meters in Iwate, Miyagi and Fukushima prefectures.

While the estimate was later revised, a tsunami over 10-meters high ended up crashing onto coastal areas, drawing criticism that the inaccurate estimate led to delays in evacuation.

Tsunami caused by volcanic eruptions are even less frequent than those caused by earthquakes, meaning much remains unknown scientifically.

"The mechanism of (Saturday's) tsunami is still unclear, and even experts are divided in their opinion. We have to recognize that forecasts of natural disasters are not perfect and take the best possible action," said Takehiko Yamamura, director of the Disaster Prevention System Institute in Tokyo.