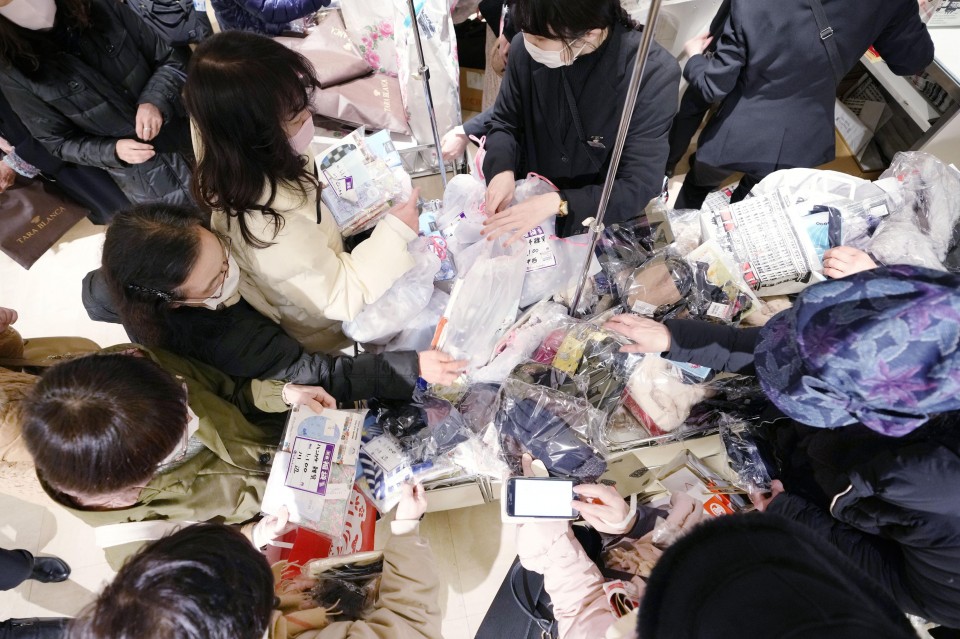 Shoppers wearing masks for protection against the coronavirus gather for a New Year sale at the Nihombashi Takashimaya department store in Tokyo on Jan. 2, 2022. (Kyodo) ==Kyodo

TOKYO - Japanese Prime Minister Fumio Kishida said Tuesday he has given up on visiting the United States and Australia for in-person summit talks before the start of a regular parliamentary session in mid-January and will focus on the COVID-19 response at home instead.

Kishida said he had been seeking to meet U.S. President Joe Biden and Australian Prime Minister Scott Morrison as he aims to step up summit diplomacy this year.

TOKYO - The U.S. dollar briefly hit a five-year high in the upper 115 yen range on Tuesday, while Tokyo stocks surged to bring the Nikkei index to its highest level since late November on the first trading day of 2022.

WASHINGTON - The United States, Russia, China and two other countries with nuclear weapons on Monday issued a joint statement affirming that nuclear war must be avoided and that the role of such armaments should be limited to defensive purposes and to deter aggression.

China hailed the statement, which also vows to continue to seek diplomatic approaches to avoid military confrontations and prevent an arms race, as the first of its kind released by the leaders of the five so-called nuclear-weapon states.

TOKYO - Tokyo confirmed 151 daily coronavirus cases Tuesday, marking the second consecutive day the count has hit triple digits, as an uptrend continues amid the spread of the Omicron variant in the country.

New cases in the Japanese capital had been below 100 after 135 cases were confirmed on Oct. 8, but the latest daily figure reported by the Tokyo metropolitan government was up from the daily tally Monday of 103.

TOKYO - Japan's central and local governments as well as many companies started the year's first day of work Tuesday amid growing fear over the Omicron variant of coronavirus.

The highly transmissible Omicron strain continued to spread in Japan during the year-end and New Year holidays, with 782 new COVID-19 cases reported nationwide on Monday. Tokyo saw its daily count surpass 100 for the first time in about three months the same day.

TOKYO - A strong earthquake with a magnitude of 6.1 struck near the Ogasawara Islands in the Pacific Ocean, south of Tokyo, on Tuesday morning but there were no reports of injuries or serious damage to infrastructure, authorities said.

The quake occurred at 6:08 a.m., registering upper 5 on the Japanese seismic intensity scale of 7 on Hahajima Island, according to the Japan Meteorological Agency. The agency said there was no threat of a tsunami.

SEOUL - A man who was spotted crossing the border into North Korea on New Year's Day is highly likely to have been a North Korean man who defected to the South through the same area in November 2020, according to a South Korean Defense Ministry official.

After the defection, the man was working as a janitor and complained of life in South Korea due to economic difficulties, according to local media reports. Repeated border breaches have led to criticism of the military for its failure to prevent them.