The U.S. government said Tuesday it plans to impose "potent" export controls against the supplying of sophisticated technologies to Russia in the event of an invasion of Ukraine, while seeking ways to address Europe's vulnerability due to energy reliance on Moscow.

The export control measure is being considered as part of what the United States calls "massive consequences" Russia would face as a result of aggression toward its neighbor country. President Joe Biden said later in the day he would also consider personally sanctioning Russian leader Vladimir Putin. 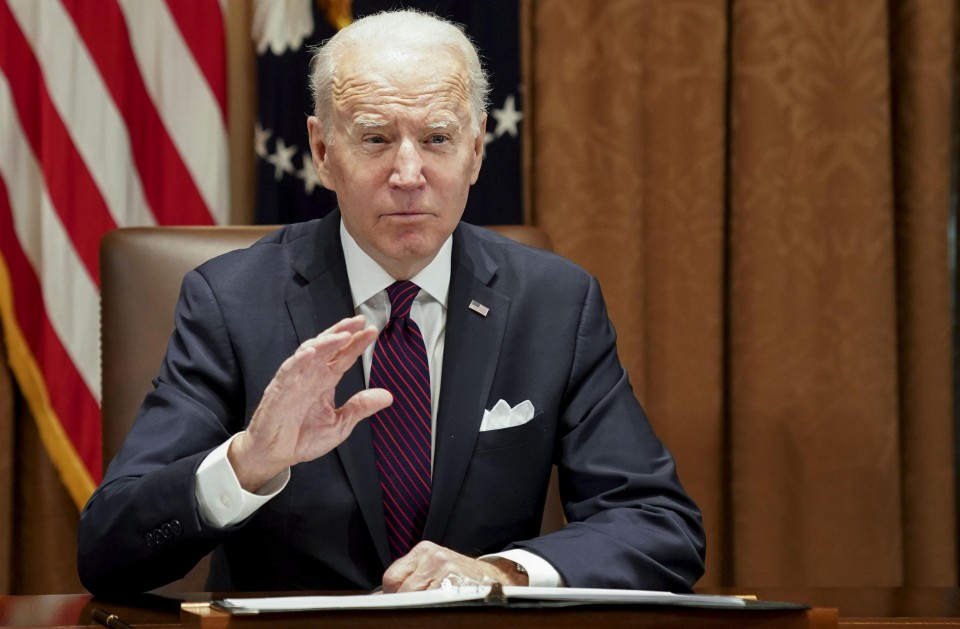 U.S. President Joe Biden attends a meeting at the White House in Washington on Jan. 20, 2022. (UPI/Kyodo)

Fears have been growing that Russia may further invade Ukraine following its annexation of Crimea in 2014, as Moscow amasses troops on the border.

The Pentagon said Monday it has put up to 8,500 troops based in the United States on "heightened alert" for possible deployment to eastern Europe, seeking especially to reassure members of the North Atlantic Treaty Organization along the Russian border.

Biden on Tuesday denied any intention of sending American or NATO forces into Ukraine, which aspires to join the alliance but is not yet a member. "But I said there are going to be serious economic consequences if he (Putin) moves," he said.

In addition to financial sanctions, which are intended to restrict foreign capital, the United States is considering along with allies and partners the envisioned export controls as a way to hit "quite hard" at Putin's "strategic ambitions to industrialize his economy," a senior Biden administration official said.

"It would impair areas that are of importance to him, whether it's in artificial intelligence, quantum computing, or defense or aerospace or other key sectors," the official added.

As Russia is a key energy supplier to European countries, the U.S. government said it is in discussions with major natural gas producers to "understand their capacity and willingness to temporarily surge natural gas output and to allocate these volumes to European buyers."

It is also working to identify additional volumes of non-Russian natural gas from various areas of the world -- from North Africa and the Middle East to Asia and the United States.

The United States, meanwhile, sought to downplay concerns over whether it and its European allies are fully aligned in making a firm response against Russia.

While U.S. actions and the European Union's responses to a Russian invasion "may not be identical," the two sides are unified in their "intention to impose massive consequences that would deliver a severe and immediate blow to Russia, and over time, make its economy even more brittle and undercut Putin's aspirations to exert influence on the world stage," the official said.