Meanwhile, the Rodong Sinmun, the mouthpiece of the ruling Workers' Party of Korea, did not elaborate on whether Kim mentioned nuclear weapons and intercontinental ballistic missiles during a key party gathering through Friday. 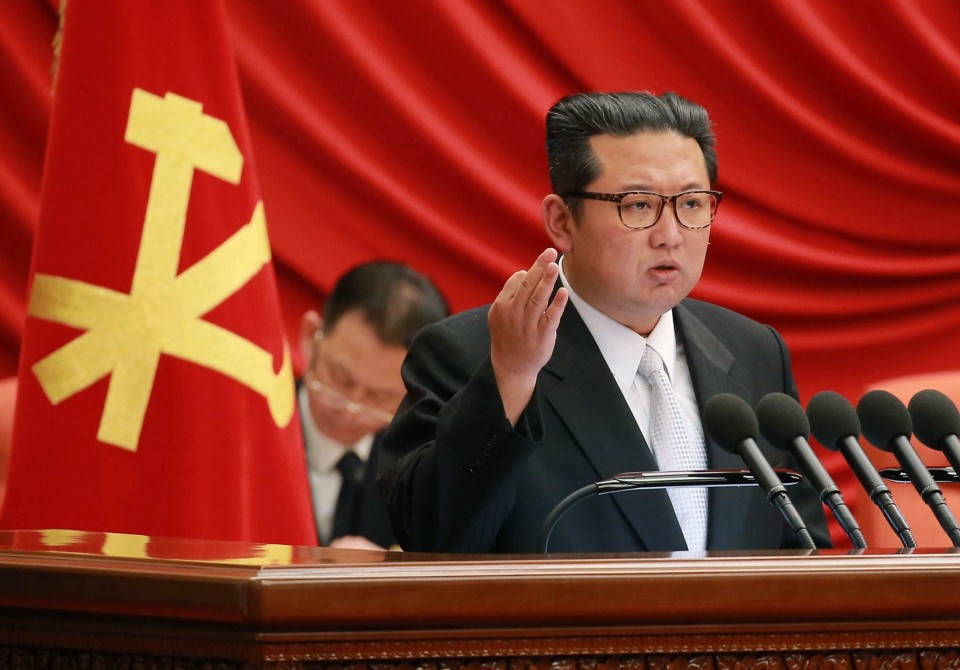 It also remains unknown whether Kim announced any policy shift toward the United States at the five-day plenary meeting of the Central Committee of the party, which was convened to map out strategies for 2022.

North Korea's silence about its diplomatic policy for this year indicated that it has been trying to steadily develop new weapons while avoiding further escalating tensions with the United States and South Korea, foreign affairs experts said.

Some pundits said Kim, who skipped his annual New Year's address for the third straight year, may put priority in 2022 on shoring up the domestic economy that has been languishing against a backdrop of the global outbreak of the novel coronavirus.

The latest gathering took place with North Korea having acknowledged it faces a severe food crisis due in part to natural disasters and sluggish trade with China, its closest and most influential ally in economic terms, as a result of the pandemic.

Kim was quoted by the official Korean Central News Agency as saying at the meeting that the struggle in 2021 "endowed us with more clear predictability about subjective and objective conditions and environment of the revolution at present and in the future."

He vowed to "increase the agricultural production and solve the food problem" in the nation, the news agency said, adding he "specified the goals" of output of commodities such as grain, fruit and vegetable for the coming 10 years.

As for security policy, Kim said, "The military environment of the Korean peninsula and the trend of the international situation" have been "getting instable day after day," according to KCNA.

It is necessary to bolster the state defense capabilities more powerfully "without a moment's delay," Kim was quoted as saying.

North Korea is banned from firing ballistic missiles under U.N. Security Council resolutions that impose sanctions on the country. Still, it has developed technological advances on hard-to-intercept weapons, threatening peace and stability in the region.

In November 2017, North Korea launched what it said was its "most powerful" ICBM capable of delivering a nuclear warhead anywhere in the continental United States. Kim declared the completion of "the state nuclear force."

The nuclear-armed nation also said last year that it has developed missiles with state-of-the-art technologies, including ballistic ones.

On the diplomatic front, direct talks between North Korea and the United States have been at a standstill for more than two years, with the administration of President Joe Biden unlikely to make concessions over denuclearization and sanctions relief.

North Korea has expressed reluctance to hold bilateral negotiations with the United States unless Washington withdraws what Pyongyang considers to be its hostile stance toward it.

Pyongyang has no diplomatic relations with Washington and Seoul.

North Korea and the United States remain technically in a state of war as the 1950-1953 Korean War -- in which U.S.-led U.N. forces fought alongside the South against the North backed by China and the Soviet Union -- ended in a cease-fire, not a peace treaty.

On Jan. 1, 2018, Kim surprisingly extended an olive branch to South Korea in his New Year's address, and later in the year promised to achieve "complete denuclearization" of the Korean Peninsula.

At the first-ever U.S.-North Korea summit in Singapore in June 2018, Kim obtained an agreement from former U.S. President Donald Trump, Biden's predecessor, that Washington would provide security guarantees to Pyongyang in return for its denuclearization.

U.S.-North Korea talks, however, have been stalled since 2019, as they have fallen short of bridging the gap between Washington's demands and Pyongyang's calls for sanctions relief.