COVID-19 vaccinations for children aged between 5 and 11 may begin February in Japan, but many parents and caregivers are still debating whether they should inoculate young ones due to worries over effects on their health.

Unlike some other countries, there have been no COVID-19 deaths reported among children in the particular age group in Japan, and it is rare for young children to develop severe symptoms caused by the novel coronavirus. 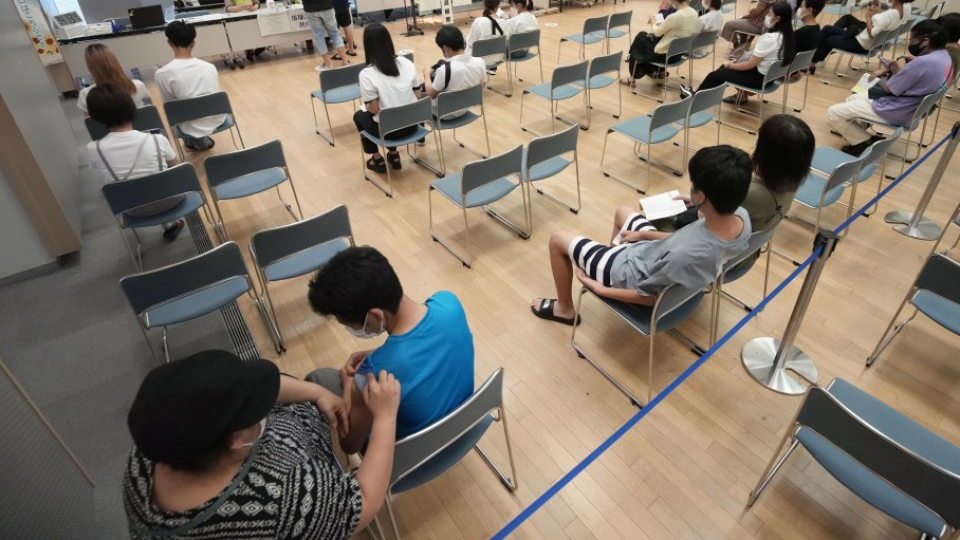 COVID-19 mass vaccination is carried out for youths aged between 12 to 18 at the city hall in Ayase in Kanagawa Prefecture, near Tokyo, on Aug. 27, 2021, ahead of their return to school after the summer vacation. (Kyodo) ==Kyodo

In the meantime, the Centers for Disease Control and Prevention in the United States, where vaccinations for the age group have already begun, recommends those children get vaccinated because COVID-19 can make them very sick, cause them to be hospitalized, and in some cases, the complications from infection can lead to death.

Since some parents in Japan are wary of possible side effects and fear potential long-term health effects of the vaccines, meticulous and committed support by authorities and health experts is seen as key to promoting the inoculation of pediatric populations.

Some side effects of the vaccines include tiredness, fever and nausea, according to the CDC.

Health authorities around the world, including the health ministry of Japan, deny long-term health effects such as fertility and other reproductive issues, as messenger RNA introduced by Pfizer Inc.'s vaccine, expected to be the first one to be approved for use for young children in the country, are quickly degraded in a matter of a few days.

The vaccine cannot change people's DNA either as mRNA do their work outside of the nucleus of their cells where DNA is stored, according to the Health, Labor and Welfare Ministry.

A woman in her 30s in Tokyo says she has been hesitant to get her daughter, a kindergartner, vaccinated out of concern over side effects because the woman experienced chest pain after she received her first vaccine shot.

But she recently felt a change in public sentiment with respect to vaccinating kids after the emergence of the Omicron variant, considered highly transmissible.

"If the infections spread, peer pressure to vaccinate kids would increase. I'm afraid I might be criticized if I hesitate," she said.

According to the Ministry of Education, Culture, Sports, Science and Technology, a total of 87,800 preschoolers, compulsory school and high school students were infected with the coronavirus from June 2020 to late November 2021, with almost no serious cases.

Opinions of the health ministry's panel on vaccinating children aged 5 through 11 remain divided, with some insisting rights to be vaccinated should be ensured, while others remain hesitant to aggressively push forward with the vaccination of young children.

In a survey taken by the National Center for Child Health and Development, 55 percent of responding elementary school students said they wanted to receive shots, while 38 percent said they did not.

"I would like to respect my child's own choice after I give him information including risks, but I also wonder how much he can understand it," said a man in his 30s in Kyoto.

His son will enter an elementary school next spring.

Schoolteachers began to wonder how they should respond when students ask them about vaccinations, even though no mass vaccinations will take place at schools after the government approves the inoculation of children aged between 5 and 11.

"I hope the government will disclose enough information so all students and their families can comprehend the situation and make a satisfactory choice," said Harumi Okada, the principal of a city-run elementary school in Osaka.

Critics and experts say it is also important to prevent children and parents from experiencing stigma over getting or not getting vaccinated.